What Can We Steal From James L. Dickey’s “Falling”?

Title of Work and its Form: “Falling,” poem
Author: James L. Dickey
Where the Work Can Be Found: “Falling” has been anthologized about ten trillion times.  You can also find the poem on the Poetry Foundation web site.

Bonuses: Here is Mr. Dickey’s New York Times obituary.  Here is an interview Mr. Dickey gave to The Paris Review.  What did the poet hope would happen when people read his work?  Check out his answer:

Discussion:
This “long” and fun poem tells a real-life story: that of a stewardess who fell out of a commercial airplane, meeting an unfortunate end at the hands of physics and fate.  The poem begins as the woman is rummaging for blankets and completing her commonplace duties.  Without warning, she is sucked out of the plane and falls to the earth.  The plot of the poem may be simple, but it packs a big wallop because of the way Mr. Dickey uses language to describe her actions and thoughts as she endures what she learns will be the last couple moments of her life.  The free verse work is split into seven stanzas that increase in intensity, culminating in a chilling final line:

There’s SO MUCH to learn from this poem that I should just jump right in, but I can’t help but point out one reason I’m writing about “Falling.”  We all love Stephen King, right?  Well, he gave an interview to The Atlantic‘s Jessica Lahey in which he discusses his views on craft and teaching.  During a discussion regarding which kind of work has the biggest impact on young readers, Mr. King says:

When it comes to literature, the best luck I ever had with high school students was teaching James Dickey’s long poem “Falling.” It’s about a stewardess who’s sucked out of a plane. They see at once that it’s an extended metaphor for life itself, from the cradle to the grave, and they like the rich language.

Mr. King, of course, is correct in his assertions and “Falling” is the kind of poem we should all have under our belts.

What do we notice first of all?  Well, Mr. Dickey stole the idea of the poem from a real news article.  This one, in fact.  Unfortunately, Mr. Dickey is no longer with us, so we can’t ask him about his exact motivation.  It’s safe to say, however, that Mr. Dickey was probably struck by the terror and freedom the young woman experienced during her descent.  Why shouldn’t you do the same thing?  The next time you read a news story that strikes you, why not jot down a few lines.  After all, most of us are moved by news stories and anecdotes we hear and the like.  We’re never at a loss for inspiration if we make use of the infinite number of stories that surround us.  There are also infinite angles you can take when borrowing from the news.  You can simply retell the story.  Or you can set the events 500 years in the future.  Or you can devote the narrative to an observer.  Or you can do as Mr. Dickey did, delving deep into what he imagined the stewardess was thinking and doing as the surly bonds of Earth reclaimed her.

And now, it’s time to do a little counting.  I know…I know…so many of us become writers because we don’t want to deal with a ton of numbers.  Unfortunately, statistical analysis can help us understand what makes “Falling” so effective.  You’ll notice that Mr. Dicket doesn’t cast his lines in a traditional manner.  That’s just fine, of course; the fragmented run-on lines mimic the stewardess’s mental state.  I’m betting that it’s pretty hard to form coherent sentences when you’re at terminal velocity without a parachute.

Mr. Dickey still had an obligation to help us figure out how we should split up the lines.  And he also has the responsibility to let the reader take a breath.  (We don’t want people to pass out at poetry readings, do we?)  So how does he manipulate the prose to allow respiration and to communicate the feeling of disjointed thought?  Well, you see all of those spaces in the fairly long lines.  But you’ll notice that he also uses punctuation, albeit sparingly.  Here’s a table that breaks down his use of punctuation in the poem:

Want to see the data in chart form? 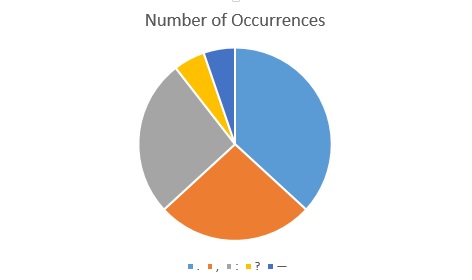 Only 19 punctuation marks?  In such a long poem?  Crazy!

Well, not really.  Mr. Dickey used the punctuation like spice, placing the marks only where they were utterly necessary.  You’ll also notice that the end of the poem-the time when the character is most despondent, we might assume-only includes two marks, including the one at the very end.  By that time, Mr. Dickey has taught us how to read the poem; he doesn’t need to provide the kind of guideposts that were much more of a necessity earlier in the poem.  What’s the overall point?  We must string together words in the manner appropriate to the work and mortar them together with the proper punctuation…even if that means omitting the marks altogether.

Another great thing about the poem is that Mr. Dickey actually gives the fictionalized protagonist things to do.  Now, the unfortunate real-life stewardess may not have imagined she could save herself by diving into water.  She may not have removed her jacket and shoes on purpose (or at all).  It’s sad, but we have no way of knowing what she was thinking because she wasn’t around to tell us the next day.  One of the big problems that a lot of people have when they fictionalize a real event is a lack of imagination.  (At least, this failure is certainly a problem for me!)

When we are molding creative works, we shouldn’t forget that we can change anything we like about the characters and the plot.  What a freeing notion, right?  Like me, you may think of the perfect thing to say to someone…an hour after you should have said it.  These restrictions are loosened in creative writing.  By all means, if you are writing about your childhood, your best friend doesn’t have to live next door.  Your first boyfriend or girlfriend doesn’t have to break your heart and show up to school looking blissful the next day.  It’s not entirely necessary that your parents got divorced.  Why?  The characters aren’t really your best friend, significant other or parents.  It’s your world, friend.  You get to decide what joys and pains your characters endure.

Previous
Hey, Why’d You Do That, Ravi Mangla?

Next
What Can We Steal From Erin Belieu’s “I Heart Your Dog’s Head”?