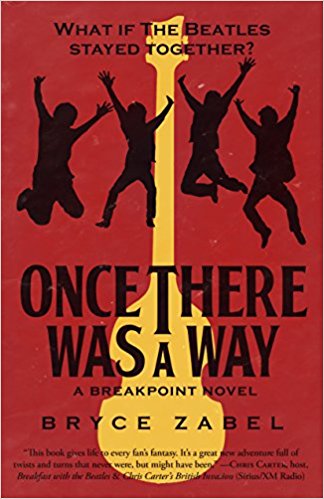 Mr. Zabel’s book (purchase links and more information at whatifbeatles.com) operates according to a simple idea: what if the Beatles had continued to play into the 1970s…and the 1980s and 1990s?  While I’m not a pre-eminent Beatles expert, I know my stuff.  The great tragedy of the post-breakup Beatles is that they really did love each other.  Sometimes they drove each other crazy, but there was a lot of love between them.  After 1970, the lads had just been through a whirlwind decade-plus of insanity.  They needed a break.  Paul needed to go to his farm.  John needed time with Yoko.  George needed to make his own music.  Ringo…needed to be Ringo.  They were always going to spend time apart, but…

Mr. Zabel takes advantage of what is possibly the writer’s most important tool: “What if?”  What if the boys had an external enemy instead of turning their ire on each other?  What if the Beatles version of Lord of the Rings had been made?  What if Paul had been a little less controlling?  John a little less addicted to Yoko?  When you think about it, “What if?” is really all we do.

In that way, Once There Was a Way also adheres to one of my other narrative rules of thumb: It should be easy to break down your story into a memorable and compelling “Oh, yeah.  That was the story in which…”  You have to admit that “What if the Beatles hadn’t broken up?” is a compelling “What if?”

Mr. Zabel, however, did not have completely free reign over the story.  He had a very important obligation to make the “What if?” plausible.  That meant research.  Mr. Zabel did enough research to ensure that the fictional story had the appearance of reality.  (That’s called “verisimilitude.”)  There are approximately eleven trillion books about The Beatles.  It’s fascinating how much we know about the boys during their time together and even the time after the breakup.  Mr. Zabel is wise enough to take only minor liberties with the truth.  The Beatles really did briefly consider adapting Lord of the Rings.  The Beatles really could have made the “Grand Bargain” that kept the band together in Mr. Zabel’s version of events.  A Beatle really did have his demos and notebooks stolen.

Classifying the book is interesting; I guess I think of it like a novel, but it is shelved with “entertainment” books.  There’s no wrong answer, really; the events are fictional, but Mr. Zabel’s book is written as a work of nonfiction.  Mr. Zabel fabricates quotes and articles from industry publications; the choice adds verisimilitude, but also makes us think we’re reading one of those eleventy trillion Beatle books.  I don’t think the book would have been as effective had it been cast in novel/short story prose:

“Come on, John.  One last time around the bend,” Paul said, his hooded eyes pleading.

Maybe it’s just because I wrote a novel that is a series of documents, but I love the idea of a non-fiction book about fictional events.  So long as the author is honest that he or she is playing make-believe, borrowing the trappings of reality allows the reader to live in the alternate universe to which the book belongs.

Once There Was a Way will interest anyone who has more than a passing interest in The Beatles.  For a few hours, the reader gets to pretend that he or she is in a world in which we had just a little bit more magic, a world in which John, Paul, George, and Ringo, four men who loved each other very much, were able to iron out their differences and to share their gifts with us.

I don’t want to ruin all of the book’s surprises, but I will say that Mr. Zabel presents a compelling case.  He clearly knows his Beatle history and does a fantastic job at blending what really happened with what we wish had happened.

Next
What’s The Matter With Carl Sawatski? — Guest Essay by Jon Sindell