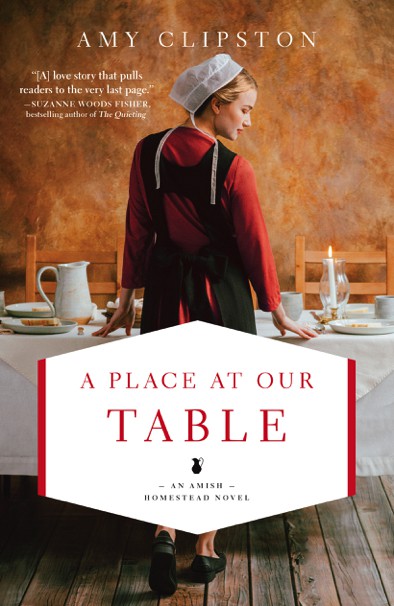 Kayla Dienner is a sweet young woman who works as a waitress at her family’s restaurant.  She was pretty close to a guy named Abram, but he broke up with her shortly after her firefighter brother died while on a call.  (What a jerk, right?)  Jamie is a firefighter who is sweet on Kayla.  See how his vocation is an obstacle to their relationship?  Kayla and Jamie are two great young people…will they be able to make and build a connection?

Amy Clipston’s A Place at Our Table tells the story of young lovers trying to overcome their internal and external hangups in order to have a future together.  Both of the protagonists are appealing and appealingly flawed.  Her book is worth a look; why not check out her web site?   You can purchase the book from your local indie store, Barnes and Noble, Kobo, and Amazon.

Okay, let’s get down to it.  Ms. Clipston employs an appealing and logical structure in the book.  We know from the start that this is a romance novel.  We’re 99% sure that Kayla and Jamie will end up together.  What we don’t know is HOW they will come together.  The same principle applies to action and science fiction movies.  Through the course of the first six Harry Potter books and movies, you know that Harry Potter will survive.  You know he will fight to restore balance between good and evil.  It’s a fait accompli.  Star Wars: Episode VII is going to be released in a couple months.  We know that Rey and the gang will be fighting Snoke and the gang and that at least most of those characters will survive.  Why?  Because we know there’s an Episode IX.

So how can you maintain dramatic tension in a work when the reader has a very good idea what will happen?  In A Place at Our Table, Ms. Clipston keeps us on the edge of our seats by playing with structure.  Kayla and Jamie are, of course, on a collision course with destiny.  Just like Jack and Rose in Titanic.  (Or the ship and the iceberg in Titanic.)  The real question is how Kayla and Jamie are going to end up together?  Are they being pulled toward each other by constant, even forces?  Here’s an illustration.

Or are the characters zigzagging about through the world?  Sometimes he is closer to her while she’s far away, sometimes she’s closer to him, but he’s dealing with his own problems…see?

Ms. Clipston maintains tension in A Place at Our Table by keeping Kayla and Jamie moving around on this spectrum.  Jamie suffers a terrible tragedy and pushes her away.  Kayla is distracted by an old friend.  The characters are on unpredictable courses, compelling the reader to wonder how the world will arrange itself to allow for the conclusion we know is in the offing.

We can face facts: the overwhelming majority of the audience for this or any Amish romance is women.  The overwhelming majority of romance authors are women.  There’s nothing wrong with that, of course, but one thing I loved about Ms. Clipston’s book (and the other work of hers that I’ve read) is that she makes the male protagonist a full citizen of the story.  The demographic of the reader doesn’t even matter; making Jamie a full character and getting into his head is just good storytelling.  A love affair is a dance between two people; why shouldn’t we have insight into both of them?   (If nothing else, we should want to make sure that Kayla is making the right choice and is in good hands!)

Ms. Clipston definitely makes Kayla and Jamie complicated, but one thing that I love about this book (and many other Amish romances) is that the characters are sometimes extremely direct to some of the questions that you might expect disciplined characters not to want to ask.  Here’s a sweet example:

There are many secrets in the hearts of these characters, but Ms. Clipston keeps the exposition rolling while keeping the focus on the more important and interesting facets of their lives.  This is an important point; writing is all about figuring out which secrets to reveal and when.  (And how, obviously.)

Ms. Clipston isn’t afraid to place serious obstacles between Kayla and Jamie and keeps our attention with a robust plot.   A Place at Our Table bodes well for Ms. Clipston’s “Amish Homestead” series; the supporting characters are interesting and will surely be pressed into service again.  Perhaps my favorite thing about the story is that the protagonists suffer serious physical and psychological losses, but are able to take them in stride through their faith and by relying upon each other.

Many thanks to Carol M. Highsmith, who donated her pictures to the Library of Congress and dedicated them to.  Talk about generosity!

As a bonus, here is an interview Ms. Clipston did with Sparrow Song Radio:

Previous
Amy Lillard’s THE QUILTING CIRCLE and Building a World