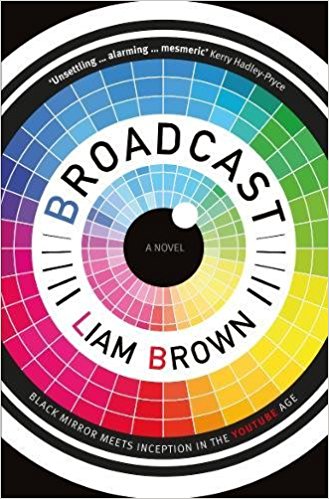 But that doesn’t stop him from being a global media superstar.

In Liam Brown‘s entertaining and pulse-pounding Broadcast, the author subjects his protagonist to a near-future horror story.  (The publisher dares to compare the book to the awesome Black Mirror, and the book actually justified the comparison.)  Liam gets an offer he can’t refuse from an Elon Musk-type: we put a chip in your brain that broadcasts everything you’re thinking at all times…and you’ll be the biggest star in the history of media.  (Get the book from the publisher, Barnes and Noble, your local indie, or Amazon.)

I don’t want to give away too much, but David obviously avails himself of the offer and he finds out that he is getting more fame and notoriety than he bargained for.  (If everything were hunky-dory, there’d be no book…)

Even though the London of Broadcast is not too terribly different from our own, Mr. Brown must engage in some worldbuilding.  He must also establish and develop the MindCast technology at the heart of the book.  How does he do these things?  Incrementally, as he should.  Both the exposition and the book’s technology evolve at a pace that makes it easy for the reader to digest while also building suspense.

Without giving away too much detail-I liked having very little foreknowledge of the story-I can say that MindCast begins in a very simple manner and then grows and changes as David himself learns more about what is going on.  The overall effect is one that is common to science fiction.  No one in the audience knows what MindCast is.  Why?  It’s not real.  Mr. Brown made it up!  When a world (or a technology) is very different from the familiar, a writer must develop these things naturally and incrementally, just as they become manifest in real life.  Mr.  Brown also employs an easy and powerful way of achieving this effect: the reader learns about MindCast at the same speed as does the narrator.

All fiction is about exploration, but science fiction takes that idea to the extreme.  What does London look like in the near future?  We’ve all seen pictures of the shiny and minimalist offices at companies like Google…what might a tech giant’s office look like in the near future?  Mr. Brown begins by dropping us (and his protagonist) into a new world so we can share the experience.  The novel literally begins with a description of the tech company’s building:

From below, the entire structure appears to be made of glass.

A giant bubble suspended a few hundred feet above the courtyard, supported by a complicated arrangement of stainless steel beams and high-tensile wires.

I am reminded of the genius way that Robert Zemeckis and Bob Gale revealed 1955 Hill Valley to the audience and Marty McFly.

I loved how Mr. Brown dealt with the “YouTube celebrity” aspect of the story.  Even though I know it’s very popular, especially with the younger demographics, I have a hard time acclimating to the fact that people can accrue fame and fortune by mere virtue of switching on a camera.  The author manages to take full advantage of the conceit, engaging in a fair-minded examination of this phenomenon.  Is David doing anything wrong?  No.  Is the audience getting their money’s worth when they tune in?  I suppose.  The point is that Mr. Brown depicts the narrator’s career in an honest light and wrenches drama from this examination.

Broadcast is a very enjoyable technothriller that doesn’t suffer from any lengthy lulls in the action.  Mr. Brown plays with a number of provocative ideas.  How much of ourselves should we reveal to others?  Can we trust multinational corporations with all of the information that we are giving them?  What constitutes our identity: what we believe about ourselves or the truth, fair or not, that others can see?