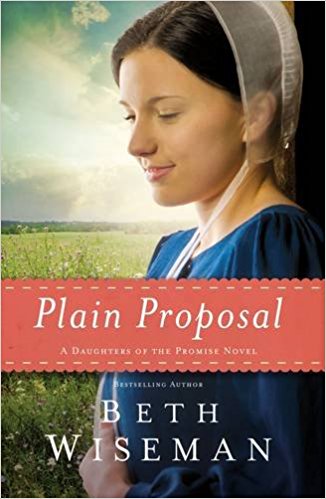 The course of true love never did run smooth, even in an Old Order Amish community.  Miriam has been in love with Saul Fisher since they were children.  Now they are on the cusp of adulthood, the time when young men and women must decide which paths in life they will take.  Miriam expects she and Saul will marry and remain in the community.  Saul, on the other hand, has a job offer from a Pittsburgh restaurant and can’t wait to leave, though it means abandoning his brothers.

Beth Wiseman very much does her job in Plain Proposal, part of her Daughters of the Promise series.  Yes, the book is a romance novel, and not even the kind that features “naughty.”  Yes, this is a Christian novel, and one of Ms. Wiseman’s explicit desires is to buffet the reader’s belief in Christianity.  If you don’t avail yourself of these kinds of novels on occasion, you’re really missing out.  Writers such as Ms. Wiseman are great because they make promises to the reader and then fulfill them.  What else do you want from a storyteller?  (Please consider purchasing the book through Ms. Wiseman’s web site, from your local indie store, from Kobo, from Barnes and Noble, or from Amazon.)

Okay, so because this is an Amish/romance/Christian/inspirational novel, we can be pretty sure that the book is not going to feature a worldwide alien invasion or a Silence of the Lambs situation.  Still, Ms. Wiseman must find a way to fulfill her responsibility to the reader.  She must give us a story in which the events matter very deeply to the characters.  There must be something important at stake.

Now look what Ms. Wiseman does in Chapter One.  We learn that the book is structured in such a way that there are alternating sections from the viewpoints of different characters.  It’s immediately clear that Miriam and Saul fancy each other.  Boooooooring.  That’s not enough to make a good book, and Ms. Wiseman knows it.  After we hear about the impending arrival of Miriam’s pretty Englisch cousin (potential love rival?!?!?), the author ends the chapter from Saul’s perspective thus:

But as she looked up at him with a smile that threatened to melt his resolve, he knew that he was going to do the unthinkable-date her for the summer.  Then leave her in August.  God, forgive me.

Oh, snap!  You don’t need to be Amish to know that this is a SERIOUS situation.  (And it’s a serious situation, regardless of your religion or way of life.)  We don’t know Miriam or Saul very well because we’re only in Chapter One, but Ms. Wiseman sets up some very big stakes:

Miriam and Saul are both in their rumschpringe, the “running around” time in which a young person decides whether he or she wishes to be baptized into the Amish way of life permanently.  Both have been running around for a while…time is running out before they must make a decision.

Miriam wants to live in the community and to marry Saul.

Saul wants to leave the community but also wants to have a sweet, romantic summer with Miriam.

These two goals are contradictory!  If one of them gets what he or she wants, the other will be heartbroken!

I loved the end of Chapter One because of how succinctly and powerfully Ms. Wiseman established the stakes.  I was reminded of a very different work of art: The Terminator.  After Kyle Reese and the T-800 shoot up the Tech Noir nightclub around Sarah Connor, Kyle makes the stakes of the story very, very clear: “Come with me if you want to live.”

Miriam’s cousin Shelby is also a young woman, but she’s not Amish.  Her parents are splitting up, and Shelby has made some poor decisions.  (Unfortunately, this is an Amish/romance/inspirational-type novel, so the reader does not get any of the dirty details.  I suppose Ms. Wiseman leaves it to your imagination.)  As another of the book’s main characters, SHELBY NEEDS A REASON TO BE IN THE RABER HOME.  SHE NEEDS TO HAVE SOME STAKE IN THE NOVEL.  So the author is careful to give her one at the end of Chapter Two.  Shelby writes in her diary:

…Maybe I’m being punished.  I don’t know.  I just know that I feel bad all the time.  I want to be loved, but my heart is so empty and my faith in life, in God, is gone.  I don’t have anything to live for.

So what is Shelby’s arc through the rest of the book?  Of course.  She’s going to find a reason to live.  (It’s not a spoiler alert to reveal that God is a part of the reason.)

Ms. Wiseman’s book is a fun and quick read because she made the characters’ goals so clear, even though she puts poor Miriam and Saul through a lot of changes of minds and hearts.  Even though the story and characters evolve (particularly Miriam’s mother, Rebecca!), the reader always has a firm grasp of what the characters want and why it matters to them.

Previous
Boris Fishman’s DON’T LET MY BABY DO RODEO: The Author Responds to My GWS QuickCraft!

Next
Wanda E. Brunstetter’s AMISH COOKING CLASS: THE BLESSING and the Comfort of the Familiar