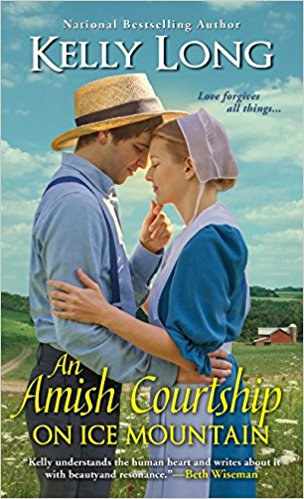 Other times, however, it can be a lot of fun when a work breaks some of the “rules” of its genre.  An Amish Courtship is such a book.  Don’t get me wrong.  It’s an Amish romance.  The characters are Amish, the problems are Amish, there is romance.  Great.  But Ms. Long gives the recipe a twist or two…

An Amish Courtship on Ice Mountain is the fourth Ice Mountain book from Kensington Publishing.  The book tells the story of Joel and Martha.  He’s a loving young man whose brother is both tight with the bishop and just a little bit evil.  Martha is from a poor family and sleeps in the pantry.  Will these two crazy kids ever get together?

For that information, of course, you’ll have to read the book.

I have to say first off that I loved what Ms. Long did with the book.   This book is definitely an “Amish inspirational romance” or whatever other label you wish to apply, but Ms. Long pushes the boundaries that constrain many of the books in this genre.

On boundaries: Like anything else, restrictions are neither good nor bad.  When you write an Amish romance, you know that there are some rules you probably have to follow.  The protagonists can’t engage in a highly detailed, 50-page “romantic” scene, particularly before they are married.  The Amish people can’t drive Corvettes to their smart houses where they ask the computer to unlock the door instead of using a key.

However, Ms. Long is smart and empathetic enough to know what Joel and Martha are thinking and feeling.  Martha is a red-blooded young woman and wants to share…romantic feelings with Joel.  And Joel?  He certainly feels the same way about the fetching Martha.  So Ms. Long doesn’t break any rules of Amish inspirational fiction, but she does allow a little more reality than usual creep into the narrative.  I’ll translate: there are some PG moments in the book!  Not just G!

Ms. Long also allows the bishop to be less-than-godly and allows brother Judah (the Kylo Ren of the family, essentially) to do some honest-to-goodness bad things.  Not just “Amish bad.”  He’s a jerk.  By allowing the characters and situations to be a little more “extreme” while remaining true to the genre, Ms. Long adds verisimilitude (the appearance of reality in fiction).  In this way, it seems as though she allowed the characters to guide her instead of other external forces, which is exactly how we live our lives.

My next thought about the book is a little bit abstract, but bear with me.  Ms. Long’s book is most certainly a genre book.  It’s an Amish romance that satisfies the bare and basic requirements of the genre.  More importantly, Ms. Long employs genre as a feeling, more than a series of boxes to be ticked.  There are some elements in the book that are a little “different” from what occurs in most of these books, but it’s okay because Martha and Joel’s story feels so much like an Amish romance that enthusiasts of the genre should have no problem with some of the unexpected.  In fact, Ms. Long’s deviations from the relative norm made me love the book all the more.

What does it mean to feel like a steampunk novel?

What does it mean to feel like a hardboiled crime story?

What does it mean to feel like historical fiction?

I suppose it all boils down to some of the oldest writing advice around: once you know the rules, you can break them in a felicitous manner.

An Amish Courtship on Ice Mountain is an awful lot of fun.  Ms. Long was able to get me to say, “No way!” a number of times.  This is a huge compliment; not only did the author make some unexpected choices, but she was able to immerse me so deeply into the narrative.

The big draw of the book, of course, is the romance between Joel and Martha, but Ms. Long packed the book with a few other story elements that add heft to the novel.  What happens when a good Amish man happens upon a drifter who needs a job and is willing to work?  How do you deal with an authority figure who is violating everything he or she is supposed to hold most dear?  Ms. Long offers us compelling answers.