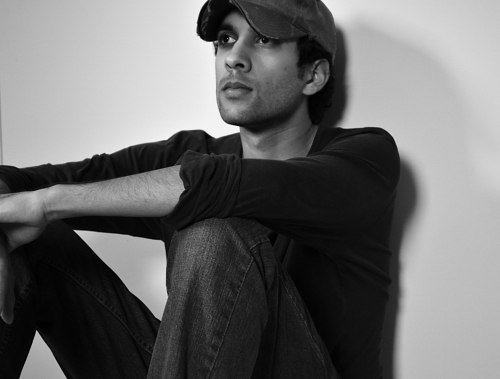 Hey, Why’d You Do That, Ravi Mangla?

Ravi Mangla is a very successful gent.  In addition to his Outpost19 book, Understudies, Mr. Mangla has placed his work in some very cool journals, including Mid-American Review, American Short Fiction and Wigleaf.  He’s also written for BULL Men’s Fiction, a personal favorite of mine.

Now, we could be overwhelmingly jealous of Mr. Mangla, but jealousy is an emotion suitable only for country songs.  It would be far more profitable for us to enjoy his work and to try and learn from what he does well.  You may wish to share a nine-hour phone call with him in which you ask only one question and expect him to answer.  But if Mr. Mangla offered such a service, he would have no time to write!  Instead, Mr. Mangla has been gracious enough to offer his insight into some of the small decisions he made in “Feats of Strength,” a short short he published in Tin House‘s Open Bar blog.

1) “Feats of Strength” features two lines of dialogue.  One happens in present tense-the strongman commits to buying the car-and one happens in the past: Natalie wonders how she and her husband could have been so negligent as to purchase a defective baby crib.

Why did you put the spoken lines into italics instead of using the good, old-fashioned quotation marks?  How come you did the same thing for both lines of dialogue, seeing as how one took place in the past and the other took place in the present?

RM: Dialogue is a bit of a spoiled brat, demanding not only distinctive markings but an entirely new paragraph (soon it will be asking to be underlined). Aesthetically, I don’t find the appearance of quotation marks particularly pleasing. Whenever possible I use plain text or italics. Only if the clarity is compromised will I roll out the quotes.

2) About 55% into the story, you have the first person narrator tell us the name of his child:

Why didn’t you just write, “my son, Dev” instead?  The clause that names Dev breaks up a sentence and also seems like more obvious and brash narration than the rest of the piece.   Why’d you do it that way?

RM: I hoped it would lend some naturalism to the piece. The omission of the child’s name until late in the story suggests a fallibility on the part of the narrator. In a piece like this, with a contrivance like a strongman at its center, I have to work twice as hard to keep the reader from seeing the strings. Sometimes a small disruption, a note of dissonance, can disarm the reader and help them to buy into the narrative.

3) The strongman decides to bring his new car home in an unorthodox manner.  Instead of just driving it home, he gets some exercise by pulling it there instead.  You tell the reader:

“With a tow hook, he attaches a thick rope to the underside of the front bumper.”

The sentence seems to be pretty simple and declarative.  Why did you put the clause with the tow hook at the beginning of the sentence?  Why not just write,

“He attaches a thick rope to the underside of the front bumper with a tow hook.”

RM: I chose that phrasing solely for the sake of sentence variation. The previous sentence started with he, and I was hesitant to replicate it. I don’t want the sentences to become too predictable or monotonous.

4) In the final paragraph, the family waves goodbye to the now-inconvenient automobile.  You write:

“The strongman reaches a bend in the road, disappears behind a cluster of trees.”

Why’d you remove the conjunction (I’m guessing you would choose “and”) and plop in that comma?
RM: Often I’ll exclude a conjunction between clauses for rhythm. It sounds jazzier to me (but perhaps not to every reader). It’s a habit I picked up from reading Sam Lipsyte. I’m a huge admirer of his language craft. His sentences have such a unique cadence.

[Editor’s Note: Mr. Mangla makes a good point.  If you’re not familiar with Sam Lipsyte’s work, why not check out this New Yorker story he wrote.  Or one of his books?  You get the drift.]

5) The story is bookended with appearances from “several women in the neighborhood” who sit in their yards and watch the scene.  You don’t mention them elsewhere in the story and they don’t affect the narrative directly.
Space is at a premium in a short short.  This story is 671 words long.  Why did you devote 27 words-slightly more than 4% of the text!-to the women?  What, in your mind, is their function?

RM: They exist to underscore the strangeness of the scene. If there was a strongman lifting a car in my neighborhood, I know I’d be standing around watching. I think they also help to open up the world of the story, so the scene isn’t happening in a vacuum.

Ravi Mangla is the author of the novel Understudies (Outpost19, 2013).   His work has appeared in Mid-American Review, American Short Fiction, The Collagist, Gigantic, The Rumpus, Wigleaf, and McSweeney’s Internet Tendency.  Follow him on Twitter: @ravi_mangla.

Previous
What Can We Steal From Laura Kasischke’s “Perspective”?

Next
What Can We Steal From James L. Dickey’s “Falling”?