Can we be honest?  Most writers like attention and enjoy being part of a dedicated literary community.  I am certainly one of these writers.  The GWS Click Bait Controversy is designed to bring attention to an important issue that impacts us all.  (And to bring attention to GWS.)  The provocative title is designed to make you click, because that’s the only thing that seems to matter in today’s media landscape.  (I thought about photoshopping a picture of a cat hugging a fish to get your attention.)

Here’s how the story started.  I received an e-mail from the createwrite listserv for the Ohio State MFA program.  The listserv is always full of new markets and with news of my colleages’ latest successes in the writing world.  Someone sent out a call for submissions for a new online lit journal that was looking for material for its first issue.  I’m always searching for new venues that might offer my work a good home, so I checked it out.  [Note: I think I will omit the identity fo the mag in question for the time being.]

The journal’s web site is pretty standard; the vast majority of online mags operate in the same way.  I clicked on the “SUBMIT PAGE” to learn about their editorial philosophy and…

A “reading fee” of three dollars per poem?

For a brand-new online journal that doesn’t pay writers?

This policy seemed a little bit outrageous to me, so I tweeted the journal:

They replied back that they could not, as a brand-new journal, afford to pay poets. (You’ll see why I don’t have screen shots for their tweets.)  They pointed out they had no funding.

Why don’t I have verbatim representations of their comments?  This is why:

The exchange fired me up about a number of problems that we have in the world of literature, so I thought I would try to start a discussion in my far-too-polite manner.  You are welcome to be less than polite in the comments.

First of all, I understand why many journals charge submission (and not reading) fees.  Journals, whether print or online or both, often subsist on a shoestring because we’ve lost a lot of readers for whatever reasons.  Submission fees represent a welcome addition to the bottom line.  Giving Submittable or Tell it Slant $3 for a short story submission isn’t too bad a deal, seeing as how postage for a snail mail package would cost nearly as much.  (Sending two or three poems to a journal via USPS, of course, would cost far less than $3…)  Further, journals only actually pull in half of the take from Submittable, as that company takes the other half.

While I’m clearly not opposed to all submission fees, I do think they are a growing problem in our field and are both a symptom and cause of the biggest challenges facing “literary writing.”

Perhaps most of all, submission fees privilege writers who can afford to pay them.  Sure, $3 doesn’t seem like a lot,  but that’s about twenty minutes of minimum-wage work.  You submit a story five times and you’re up to $15, all so an editor (or intern) can read the first page or two of your story and click “reject.”  Do we really want literary journals to be filled only with the work of people who have fat PayPal accounts?

Submission fees striate the field of writers in another way.  Do awesome writers such as T.C. Boyle or Joyce Carol Oates pay submission fees when they send a story to the editors of a journal that charges fees?  I’m guessing they don’t.  I understand WHY they don’t pay, but does that make it fair?

I have paid submission fees in the past and will probably do so in the future according to a general philosophy, driven by my agreement with Harlan Ellison’s famous “Pay the Writer” rant. I get pretty upset with any publication that refuses to pay writers, the people who actually create the publication’s wares, but DO pay the editors, the publisher, the office chair company, the delivery company that brought the office chairs, the electric company, the office landlord, the water company, the copier company, the computer distributor, the paper clip supplier, the advertising agency, the cab company that takes employees home after late work nights and the restaurant that hosts the company holiday party.

I am more likely to pay the $3 if the journal is especially prestigious, if it pays, if it publishes in print, and if it is clear that no one is making any real money off of the journal.  Everyone is welcome to make their own decisions, of course.

There are demographic changes in the cultural climate that I feel are a big problem.  Here are some wholly unscientific Venn diagrams to describe my point.  Think about fifty years ago, when our Literary Lions were roaring and people like Norman Mailer actually appeared on The Tonight Show.  TV and radio were in full blossom, of course, but reading literature was much more important to the average person, even if it was simply a dime detective novel or a pulp science fiction magazine.  Here’s my unscientific concept of what the world of literature looked like: 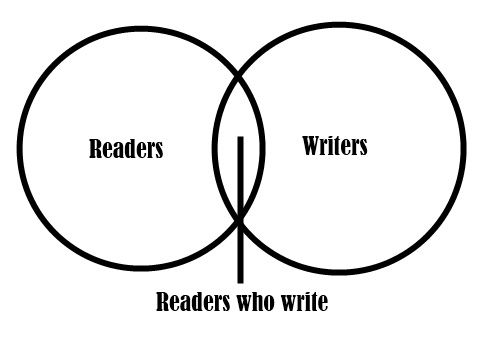 A large base of READERS supported writers in the past.  Today, it seems as though every single person who reads short stories also wants to write and publish them.  The landscape looks more like this: 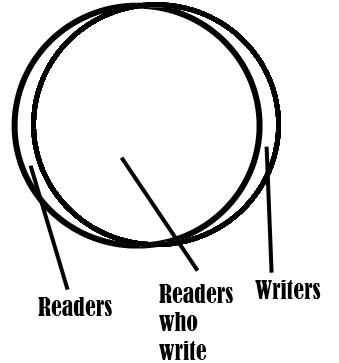 Am I suggesting anyone abandon all hopes of achieving greatness in the field of writing?  Of course not.  I am suggesting that it’s dangerous to increasingly rely upon those “readers who write” as sole support for any literary endeavor.  We need to create NEW readers.  We need to produce more work and more journals that will appeal to more people.  We need to dismantle the delusion among many prospective readers that poetry must be impenetrable and that poets are deliberately trying to confuse.  Submission fees are, in a way, an acknowledgement that the literary world is becoming ever more insular and can only gain support from those who are already intimately involved with the scene.

And the scene is indeed shrinking.  An alarming number of people are simply unable to read literature. A Washington Post article cites Michael Gorman, president of the American Library Association and a librarian at California State University at Fresno, lamenting that “Only 31 percent of college graduates can read a complex book and extrapolate from it. That’s not saying much for the remainder.”  Journals and publishers should be reaching out for support from the wider public, not digging in, hoping for a small sliver of a dwindling pie.  Submission fees seem like a kind of admission that the work we are producing can’t garner a wide enough audience to be self-sustaining.

Am I advocating a literary world in which all books feature robots that transform into cars?  Would I like every book to be the length of a dozen tweets with giant pictures of Kim Kardashian pointing to the words so people will read them?  No.  Perhaps we need to take a long look at the state of the literary community and figure out how we can become more relevant in mainstream culture.

Most importantly: what do you think?  Leave a comment or interact on social media.

Previous
GWS Thanks For Stealing My Writing Time, E. Lockhart (Author of The Disreputable History of Frankie Landau-Banks)

Next
GWS Debate: Brand Names in Fiction…What Do You Think?