Title of Work and its Form: “Never Write From a Place of Despair,” creative nonfiction
Author: Erika Anderson (on Twitter @ErikaOnFire)
Date of Work: 2014
Where the Work Can Be Found: The piece debuted in Issue 1 of Midnight Breakfast.  You can find the work here.

Bonuses: Ms. Anderson is very kind; she offers a collection of her publications at her web site.  I particularly enjoy her brief “workshop” of the author photo.

Discussion:
This work of creative nonfiction describes Ms. Anderson’s reaction to the aftermath of her divorce.  It seems clear that Ms. Anderson was figuring things out at the time and that the piece is an instance in which the author is giving the reader advice that she is also trying to internalize.  There are many “rules” in the piece, several “do not”s and “never”s and the final paragraph leaves us with a sense that catharsis is on its way, albeit slowly.

I was first struck by the momentum in the piece.  Ms. Anderson grabs you by the lapel and won’t let you go.  How does she make this happen?  Well, repetition for one thing.  A composer uses motifs, short melodic passages, to bring unity and momentum to a piece.  Plenty of examples can be found in the best music ever composed:

Ms. Anderson establishes the “never write” motif in her title and employs it in the piece.  She eventually brings in “do not,” just as Beethoven cleverly introduces the famous “Ode to Joy” melody to the symphony before he allows it to take over the work and reach full flower.

Ms. Anderson does another thing to build and maintain momentum: she varies the lengths of her paragraphs, just as Beethoven varied the tempi in the movements of the Ninth.

I also admire the manner in which Ms. Anderson confronts one of the big problems inherent in the composition of creative nonfiction: YOU HAVE TO BE HONEST AND SOMETIMES REVEAL SOME OF THE FAILURES OF YOUR LIFE OR THINGS THAT ARE A BIT EMBARRASSING.

Sad but true: our lives don’t always unfurl according to our plans.  We will sometimes fail in our efforts and our relationships.  Unfortunately, these are the kinds of truths that we must confess in creative nonfiction.  Happy stories are often meaningless or boring.  Divorces?  They’re usually as painful as they are “juicy.”  Think about it this way.  Let’s say you’re on a bus and I plop down in the seat beside you and say, “Boy, do I have a story for you.  This one time, I stubbed my toe so bad that it swelled up and looked like a grape for a MONTH.”  And then I keep talking about it for an hour.  You’d go crazy, right?

Now let’s say that Valentino Achak Deng sits beside you and somehow organically mentions that he’s one of the Lost Boys of Sudan.  I’m going to bet that you would be interested in hearing his story, even though that story is ridiculously sad and should never, ever happen in reality.

I think my ultimate point is that we NEED to confess and to bare ourselves in order to create powerful works of creative nonfiction.  There may certainly be exceptions, but we spend our lives surrounded by people who hide behind projections of how they want to be seen by others.  Writers such as Mary Karr are brave enough to expose their flaws.  Not only are her stories more interesting than most, but they’re also more powerful.

Here are my thoughts in chart form: 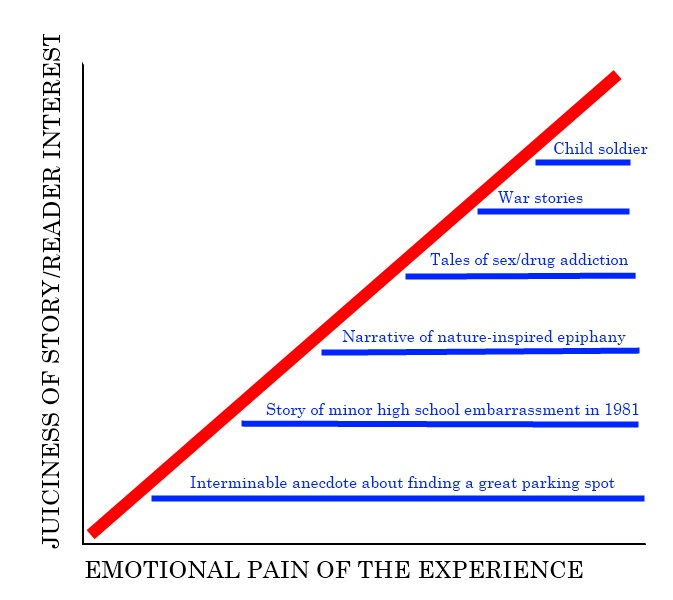 Ms. Anderson’s story definitely doesn’t fall on the bottom of the red line.  You don’t have to be Harold Bloom to pick up on the fact that Ms. Anderson is telling us that she was in that “place of despair.”  She reveals that she may not have known her ex-husband as well as she thought.  She’s brave enough to confess that she was adrift in her thirties…not the best situation, for sure.

It seemed to me that Ms. Anderson was being very honest with the reader, but was also employing a technique that allowed her to be frank with us.  She gains distance from us through her use of point of view and choices of words.  For example, here’s a passage from the piece:

You thought your husband never loved you because he could never touch you the right way. He hated that there was a right way — he wanted to pet you like a puppy, to paw at your blonde-haired forearm, to stroke the heft of your thigh, for that to be good enough. But it wasn’t, and that broke him and it broke you.

We have been told the story is nonfiction, so we assume it to be true.  Ms. Anderson, however, employs the second person point of view.  Why not use first person?  She’s writing her own story, after all!  Well, the second person allows the writer to push the reader away a little bit.  We can “trick” ourselves into believing that we’re not really confessing our own problems…we’re writing about the reader’s life, right?  See?  It says, “You!”  That means the reader!  Compare the above passage after a transformation into first person:

I thought my husband never loved me because he could never touch me the right way. He hated that there was a right way — he wanted to pet me like a puppy, to paw at my blonde-haired forearm, to stroke the heft of my thigh, for that to be good enough. But it wasn’t, and that broke him and it broke me.

The sentences read differently, don’t they?  The second person offers a layer of psychological protection and it also subtly turns the reader away from thinking that you might simply be complaining or laying down a list of grievances.  (Not that I think Ms. Anderson is doing those things, of course.)  Instead, Ms. Anderson subconsciously forces the reader to immerse him or herself in her experience.  There’s no PROPER point of view for creative nonfiction (or any piece), but the point is to create the conditions under which you can tell the most faithful version of your story.  If you need to switch POV, so be it.