Title of Work and its Form: Forest of Fortune, novel
Author: Jim Ruland (on Twitter @JimVermin)
Date of Work: 2014
Where the Work Can Be Found: Tyrus Books is responsible for publishing the book; why not buy a copy directly from them?  Independent bookstores would also appreciate your business.  The book is also available from Powell’s and Amazon.

Bonuses: You should definitely check out the site that Mr. Ruland put together for his book.  Here is Mr. Ruland’s blog.  If you can get over your jealousy, take a look at some of the work Mr. Ruland has published in The Believer.

Discussion:
Forest of Fortune is a novel that defies easy categorization and does so in the best of ways.  The book is certainly “literary,” for whatever that means.  Mr. Ruland has also packed in elements of the supernatural thriller; the titular casino game, for instance, seemed to echo the evil games of chance in the Twilight Zone episodes “The Fever” and “Nick of Time.”  The book also confronts a vast canvas; it’s not just the story of three people who have a location in common.  Taken as a whole, Forest of Fortune is a somewhat sprawling depiction of a place that is at once sad and joyful, a place where the hopeless cater to the hopeful and most visitors don’t notice the irony that they have traveled to the middle of nowhere to surround themselves with bright, flashing lights and contrived excitement.  Whether or not he did it consciously, Mr. Ruland seems to be influenced by the climax and denouement of Poe’s “The Fall of the House of Usher.”

Okay, that’s the fancy-pants way to describe the book.  Here’s the way we look at the book if we’re thinking in terms of structural engineering.  Forest of Fortune entwines the stories of three people who have a close relationship with Thunderclap Casino, an Indian gaming establishment in a fairly remote part of southern California.  (Note: I use the term “Indian gaming” because that seems to be the industry’s preferred nomenclature.)

Here are the third-person protagonists employed by the author:

…Aaaaand Mr. Ruland throws us a bit of a curveball.  The first page of prose is in italicized first-person.  This perspective should remain a little bit of a conundrum.  It suffices to say that Mr. Ruland shrouds this voice in acceptable mystery and fulfills his obligation to clarify what is going on as the book goes on.

What’s the next thing we do when considering a novel?  That’s right.  We look at the structure.  Mr. Ruland’s doldrums-trapped characters are given several seasons to change:

And the next thing we do?  We plot the numbers on a graph so we can see a visual representation of the section lengths: 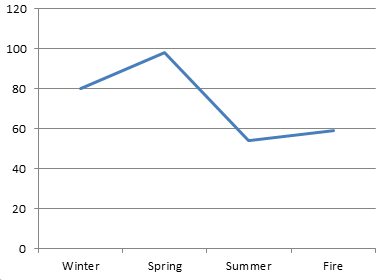 What do we notice?  “Spring” is the longest section and the final two are much shorter than the others.  Why does this make sense?  In “Winter” and “Spring,” Mr. Ruland has a lot of pipe to lay so the end of the narrative will flow.  Further, once we get to the climax, we (as readers) just want to go go go and Mr. Ruland shrewdly gives us what we want.

Is a structure of this shape mandatory?  Of course not.  A storyteller’s First Commandment is that the structure of the piece must, above all, serve the narrative and its characters.  The three  protagonists (perhaps four, depending on how you look at it) have complicated backgrounds and the author takes the time to throw in a flashback here and there and to give us a complete understanding of who the characters are and why we should care about them.

It’s not fair to say that Forest of Fortune resembles The Twilight Zone exactly.  The latter is an idea-driven TV program (often) capped with twist endings and whose plots are as compact as the amount of characterization.  The book and the program do have something interesting in common: both feature climaxes that are placed at the VERY end of the piece, leaving very little time for denouement.  (The establishment of the characters’ new status quo.)

You probably noticed that the last section of the book is, as they would say on Sesame Street, is not like the others.  It’s not the same.  The title of the section gives you a little hint with respect to the big event that ushers the characters into a new point in their lives.  Why do I bother pointing this out?  Such a structure creates a cool effect.  Mr. Ruland does not spell out every last detail as to what will happen to the characters.  Instead, his characters endure a stressful situation and the reader is given clues to help them divine the futures they have in store.

The same effect can be found in a classic film: 1984’s The Terminator.  Sarah Connor, of course, has killed the T-800 and knows she must now bear and protect the man who will eventually fight the machines.  She retreats into the countryside.  James Cameron offers us a very brief gas station coda in which we’re informed that Sarah has accepted her mission and that she loves Kyle Reese.  Then Sarah drives off into the stormcloud-blanketed horizon: 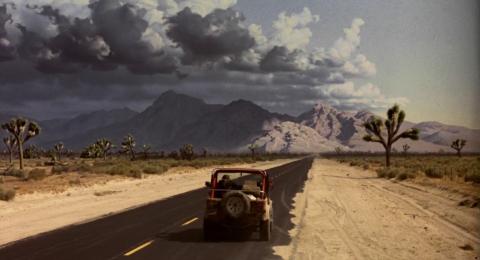 We don’t get a TON of information, but we have a pretty good idea of what Sarah Connor’s future holds…a tough climb in difficult weather.

One of the things I admired most about Forest of Fortune is the way Mr. Ruland uses descriptive imagery.  For example:

As Lupita labored up the grade, she wondered why some mountains out here on the outskirts of the desert were jacketed in soil while others resembled piles of boulders stacked by a gigantic hand.  Not for the first time she wondered how two mountains could be the same height and shape, but so different.  One covered in verdant scrub, the other rocky and barren.  They sat side-by-side, inviting comparison.  Similar but different, like Lupita and Mariana.

Denise reminded Lupita of her mother, who dealt with people the way a machete sliced through fruit.

Pemberton had no recollection of sending, typing, or even thinking these [text] messages.  His bafflement was total, his confusion complete.  Did his inner O’Nan send Debra these texts? He was still wearing the name tag from the seminar, only Pemberton had been crossed out, and now it said: LIKE YOU CARE.

So the sentences are pretty.  But more importantly, the beautiful language gets work done for Mr. Ruland, putting across plot and/or characterization.  I suppose that I’m touching upon one of the big differences between the composition of poetry and narrative.  I’m certainly not saying that poets NEVER describe characters or plots.  A poem, however, is more likely to be a short burst that places a lot of beautiful responsibility on the reader to interpret meaning.  On the other hand, a short story or novel requires each element to serve a far larger whole.  It’s like tennis versus baseball: a singles player is fully responsible for getting a win, but a baseball player has several colleagues on whom he must rely for victory.

Above all, Forest of Fortune is a fun novel about serious issues.  How can we overcome our big problems?  How do we leave behind the disappointments, self-created and otherwise, that have made us miserable?  What does it take to get out of the doldrums?  Can we simply outrun these problems or are they simply too fleet of foot?

3 thoughts on “What Can We Steal From Jim Ruland’s Forest of Fortune?”