What Can We Steal From Alexis Pope’s “Directions: Exit This Burning Building”?

Title of Work and its Form: “Directions: Exit This Burning Building,” poem
Author: Alexis Pope (on Twitter @alexisflannery)
Date of Work: 2013
Where the Work Can Be Found: The poem debuted in Issue 17 of Coconut Magazine.  You can read the work here.  The poem was subsequently reprinted in Bone Matter, the Lettered Streets Press chapbook that Ms. Pope shared with Aubrey Hirsch.

Bonuses: Here is an interview Ms. Pope granted to Vouched Books.  Here is a poem Ms. Pope placed in Guernica.  I’ve said it a thousand times: poetry is usually best when heard rather than read.  Here’s a video of Ms. Pope reading some of her work:

Discussion:
Well, the meaning of a published poem is determined by the reader, not the poet.  I don’t know if Ms. Pope had this in mind, but it seemed to me that “Directions” is a three-section poem about a lover warning another that their relationship may not be a lifetime of wine and roses.  Each section features a potent image described in slightly abstract band that keeps the meaning open to interpretation.

One of the reasons I liked this poem is because of the way Ms. Pope plays with the lines.  The work in the chapbook is helpful to me (as it may be to you) because Ms. Pope is far more “experimental” than I tend to be.  It’s wonderful, isn’t it?  If you’re a more “conventional” poet, you can enjoy Ms. Pope’s poem and try to understand how they work in the interest of improving your own work!

Here’s a section of Ms. Pope’s first stanza.  (Yes, I was careful to ensure the lineation is the same as in her chapbook; these things can change a little depending on the size of your browser window.)

In the chapbook, the right margins are justified, too.  (Darn digital world…)  You’ll notice immediately that Ms. Pope has inserted a slash into each of her lines.  In case you weren’t aware, a slash is the way you signify a line break in a poem when you can’t reproduce the lines as intended.  For example, here’s the first stanza of “Annabel Lee” as it might be quoted under circumstances in which a writer couldn’t reproduce the author’s original lines:

It was many and many a year ago, /In a kingdom by the sea, /That a maiden there lived whom you may know /By the name of Annabel Lee; /And this maiden she lived with no other thought /Than to love and be loved by me.

Ms. Pope could just have hit “return” when she wanted a new line.  What does Ms. Pope gain by placing a slash in each of her lines?

Here’s number 3 and possibly the most fun thing that Ms. Pope gains with her structure.  Take a look at the poem with all of the slashes circled in red: 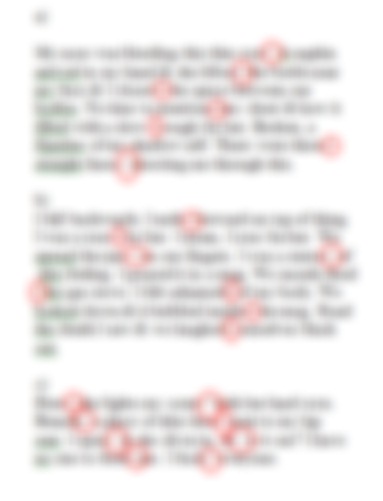 I blurred the words because I wouldn’t dream of reprinting Ms. Pope’s poem without permission.  Further, the shape of the slashes take on a form when you’re not thinking of the words, don’t they? 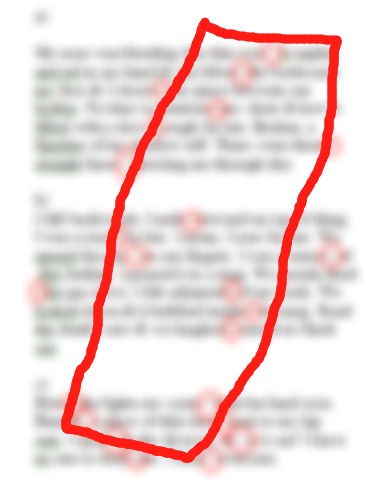 No, the correlation isn’t perfect, of course.  But can you allow your pareidolia go to work?  The many slashes in the poem create blank spaces that attract your eyes.  The poem seems to contain a slash, doesn’t it? 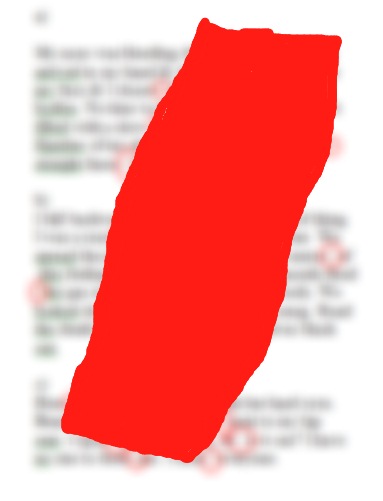 The form of the poem reflects the subject matter, facilitated at least in part because of the way that Ms. Pope uses the slashes in the lines.

Previous
What Can We Steal From Adam Carolla?

Next
What Can We Steal From Michael Byers’s “Malaria”?