Hey, want to go see Stephen King talk about writing in a fairly intimate setting?  Oh…there’s no such event happening tonight.  And even if there were, we would be kept out by the vagaries of distance and travel cost and of our other responsibilities.

Thanks to the wonder of the Internet, however, we can “attend” a master class that Mr. King gave at UMass Lowell on Friday, December 7th, 2012.  The talk was moderated by another great writer, Andre Dubus III.  (He teaches at the school.)

So let’s pull up a seat.  Make sure you turn off your cell phone so you won’t disturb others.  And go to the bathroom now so you don’t make everyone else in your row stand up to let you by.

What are some things we can steal from the panel discussion?

4:05: After a spirited introduction from Mr. Dubus, Mr. King relates how starstruck he was a young writer attending a masterclass given by Joseph Heller.  “I remember thinking to myself, ‘I’m breathing the same air as the guy who thought up Yossarian and Major Major and all of those things.  I was in love with reading.  I was in love with my girlfriend, but sometimes, you know, if I’d been given a choice, if they had said, ‘you can have your girlfriend or your books,’ I’d have to sit down and say, ‘let me think about that.'”  Mr. King was flabbergasted and intimidated by Heller until the author spoke for a while and Mr. King realized that Heller was “just a guy.”  Just like Mr. Dubus and just like himself.  Mr. King reminds us that writers all begin in the same place and share a great deal, including humanity.  We’re part of a vast fraternity and we share the same neuroses and responsibility to contribute to the success of the next generation.  Do the “big boys” and “big girls” have the obligation to invite into their homes every aspiring writer they meet?  Of course not.  But we improve as writers if we relate to other writers.  (Which is part of my motivation for doing this site in the first place!)

At around 7:00, Mr. King tells a fun story about how he came up with the idea for his next novel.  He was in a hotel room somewhere in the Carolinas and saw a news story about a dispute in Cleveland.  An aggrieved woman heard that her rival was applying for a job at a large cattle call at a McDonald’s and decided to get her revenge.  The woman drove to McDonald’s and began a physical altercation.  When the victim got away, the perpetrator got back into her car and plowed through a number of job seekers.  Mr. King seems to be talking about this story: “Police: Four hit by car in McDonald’s parking lot, cell phone video shows incident.”  (There’s a snippet from the local TV news broadcast, too.)

And this seems to be video of the encounter.  (Careful; it’s pretty intense!)

Approximately halfway through the masterclass, Mr. King is asked about his preferences with respect to composition: pen and paper or a keyboard?  Mr. King says that he prefers to write longhand, especially when jotting down notes.  There’s no right answer to the question; it’s certainly a matter of personal preference.  Speaking from my own experience, however, I believe that writing your first draft longhand allows you to really FEEL the words you’re putting down.   According to the typing test I just took, I can type 83 words per minute.  I certainly can’t write that many longhand.  To my mind, composing prose longhand creates a bottleneck that forces a writer to devote a split second of additional thought to his or her choices, on both the micro and macro levels.  No matter your inclination, I would certainly think that it’s worth experimenting with the other on occasion.

Don’t you love hearing smart writers talk about why certain bad books are bad?  It’s also a lot of fun watching an incredibly successful writer ham it up like one of the guys.  Isn’t it sad that the lecture is over?  I hope you enjoyed seeing Stephen King’s talk with me.  We should do this sort of thing again!  Drinks are on me! 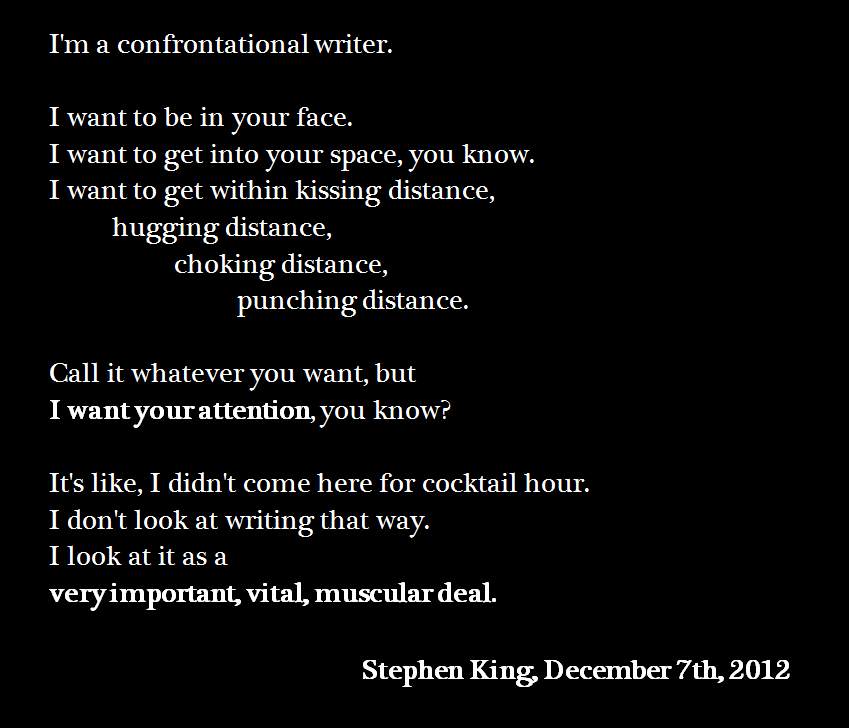