Ladies and gentlemen, I had a fascinating Sunday, October 20th.  I am the kind of person who is lucky enough never to have a day off.  Even if I’m not teaching a class or “working” on a specific day, I’m still working.  Grading papers.  Finishing stories.  Figuring out what I want to do with a novel that will likely never be published.  Writing essays for GWS or making audio recordings for a literary podcast that is kind enough to like my stuff.

After I had already written a GWS essay, I came across this link in one of my social media feeds: Cathy Day’s principles of Literary Citizenship.  Ms. Day (accessible on Twitter @daycathy) reminds all of us…and that means ALL of us that we are charged to fulfill some responsibilities in exchange for being part of the literary community.  Or the artistic community.  Or an American.  Or a human being.  The blunt and simple truth is that we ALL benefit from storytelling and from music and from visual art, even if we don’t know it.  Shoot, even I will admit that we’re all part of the fashion scene, even though Tyra Banks would die from laughing if she saw me.  (Clothed or unclothed, I suppose.)  If you need to be convinced, take a look at this scene from The Devil Wears Prada.  Fantine learns that she’s a part of the fashion world, even though she thinks she’s a proud agnostic:

Ms. Day is very polite about it: if we love literature, we all need to be good literary citizens.  How can we do so?  I’ll address each of her sensible points.

So.  How does all of this relate to “Weird Al” Yankovic, one of my first heroes in writing and comedy?  I was looking over a story-wish me luck with it-when I noticed this tweet come through the GWS Twitter feed:

The URL led to this image: 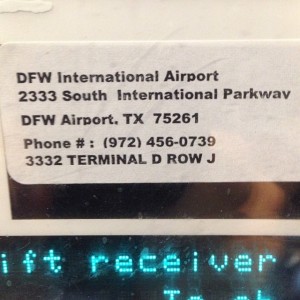 That’s right…”Weird Al” Yankovic was standing at an airport pay phone, ready to talk with fans.  I dialed once: busy.  Twice: busy.  I fixed a few paragraphs of my story and called again: busy.  So I tried again…there was a pause.  Then a familiar voice said, “Hello?”

My years of improv comedy served me well.  I told Mr. Yankovic (one must be formal with the creative mind behind works such as “One More Minute,” of course) how long I had been a fan and how I’ve seen his film UHF a thousand times.  I told him that, as much as I love his parodies, his original songs are far closer to my heart.  Best of all, I told him that I even included him on Great Writers Steal.  See?  I wrote about “You Don’t Love Me Anymore.”

I knew that Mr. Yankovic had plenty of other fans who wanted to speak with him, so I let him get onto other folks, but not before I made him laugh by suggesting he use some Purell after using a public pay phone.

So I spoke to Mr. Yankovic for less than a minute, but that brief experience was a pretty cool gift.  And I’m guessing that he enjoyed hearing other fans drip praise in his ear for the quarter of an hour before he had to go through airport security.  And what wonderful synchronicity; I read Ms. Day’s essay on the same day that I got to fulfill her #1 requirement for literary citizenship.

Perhaps there’s a corollary that applies to greatly successful writers:

Be available to your fans and those who would like to send you “charming” notes.

Now, I love Stephen King, but I don’t have any access to the gentleman.  One can certainly understand why he might not stand out on a streetcorner with a sign that says, “I’m Stephen King.”  I suppose that a “charming” note sent to his publisher might get to him…but he’s a busy guy.  Mr. King, however, has done an AMA for Reddit.

Social media offers powerful opportunities for “prominent” writers to receive the kindnesses that we’re all responsible for sharing.  Maybe you tweet at Joyce Carol Oates…and once in a while, maybe JCO will tweet you back.  In the course of my near-year of doing GWS, I’ve sent my share of “charming” notes to writers whose books don’t yet occupy an entire shelf in the library; it’s a pleasure to focus critical attention on writers and works that may be otherwise overlooked, and I enjoy receiving kindness in return.  (Though I do long for the day when up-and-coming writers receive as much attention as that Duck Dynasty guy.  What kind of a name is “Duck” anyway?)

So I had a good Sunday.  I finished a short story, did a bunch of other things and got to tell one of my favorite writers what I think of him.  Being a good literary citizen is quite fulfilling!

“Close But No Cigar” is an awesome song and the video was directed by John K.!

I’m pretty sure that Mr. Yankovic was thinking about me and my romantic history when he wrote this song: