Title of Work and its Form: “Head, perhaps of an angel,” poem
Author: Ida Stewart
Date of Work: 2011
Where the Work Can Be Found: The poem was first published in the Spring/Summer 2011 issue of The Journal, Ohio State’s excellent lit mag.  The kind people at The Journal have posted the poem online for your enjoyment.  (I happen to know some of those people and they are indeed kind.)

Bonuses: Ms. Stewart published her first book of poetry in 2011.  Why not consider purchasing Gloss from the folks at Perugia Press?  If you’re in the Athens, Georgia area, why not ask Michael Stipe to give me a phone call and then buy the book from Avid Bookshop, a cool independent?  (Gloss was even a staff pick!)  Yes, you can also get the book from Amazon.  Here is a review of Gloss that was written by Karen Pickell.  Here is an interesting article about Ms. Stewart that was published in the UGA’s newspaper.

Discussion:
Friends, this is a GWS first.  Ordinarily, I begin each essay with a summary of the work.  This time will be a little different.  Look at how Ms. Stewart begins her poem:

Okay, she titled her poem and made the artistic choice not to capitalize some of the words.  That’s fine.  What about that next line?  Now, I like to think I’m a well-educated guy and I like think to think that I wouldn’t embarrass myself on Jeopardy!…so long as I’m playing against Kardashians.  (I would CRUSH it.)  There are, however, many things I don’t know enough about:

I also don’t happen to know about the Early Gothic Hall at the Cloisters.  Here’s the dilemma on which we should focus:

Do I need to know about the Early Gothic Hall at The Cloisters in order to understand the poem?  Or would knowing simply deepen my enjoyment of the poem?

The answer, of course, is that knowing enhances our enjoyment of the piece.  Ms. Stewart understands a couple very important principles:

(Number 1 is mine, but the second concept comes from the great Lee K. Abbott.)  Now.  If you’re like me, you want to erase some of your ignorance by learning about the Early Gothic Hall at The Cloisters.  A part of the Metropolitan Museum of Art, The Cloisters “is the only museum in the United Stated dedicated solely to the art and architecture of medieval Europe.”  If you make the trek to Manhattan, you will be knocked out when confronted by the beauty that can be wrought by human hands.

So.  Ms. Stewart’s poem gives you the opportunity to reflect upon a work from The Cloisters, but doesn’t require you to do so.

Okay, to the poem itself.  I think one of the things that sets great poets apart from the mediocre ones like me is an understanding of how to structure their work.  Poetry isn’t just a scattershot jumble of words; there’s meaning behind each of the million choices a poet makes.  Look how Ms. Stewart structured her poem: 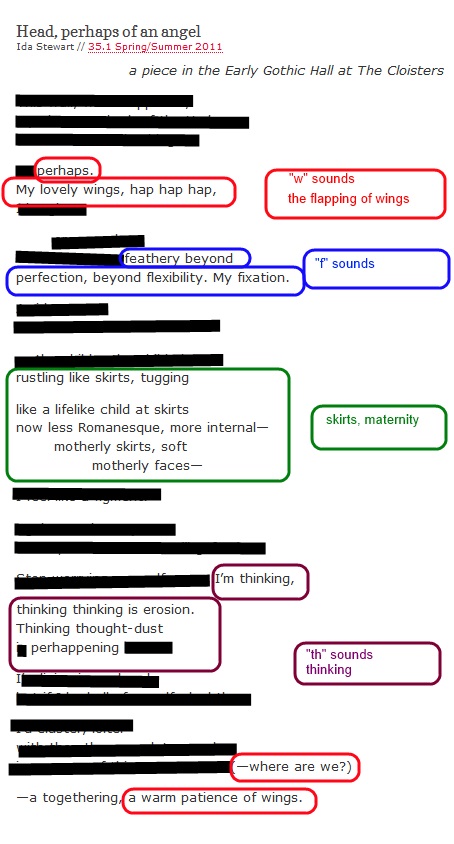 The poem consists of a few different sections that, when combined, make Ms. Stewart’s ultimate point.  Isn’t this what it’s like to walk through a museum or gallery?  You have similar experiences (looking at paintings and sculptures) that are also very different because of the range of reactions you have to the art.  The author guides the reader through different sounds and concepts, just as a museum guide can take a guest through different exhibits.  Best of all, the poems ends as it begins, just as you emerge from the museum to the world you inhabited before.

It can sometimes be difficult to employ onomatopoeia in an unanticipated and felicitous manner.  It’s often tempting to simply say that the gun went “BANG” or to describe the “CRACK” of the bat.  Look what Ms. Stewart did.  Not only does she describe the flapping of a bird’s wings with an unexpected “hap hap hap,” but she has also tied the sound to the “perhaps” in the previous line.  Ms. Stewart’s ingenuity makes the whole of the poem more cohesive and sets it apart from other poetic depictions of an featured nature.