Title of Work and its Form: “I’m Going To Let You Go, Okay?,” short story
Author: John Byrne (on Twitter @johnbyrnester)
Date of Work: 2013
Where the Work Can Be Found:  The story debuted in the Spring 2013 issue of The Baltimore Review.  You can find it here.

Bonuses: Mr. Byrne is one of the many writers who earns my healthy jealousy.  He’s also a journalist and the founder and chairman of Raw Story.  Here is a 2007 interview Mr. Byrne did with Mother Jones.

Discussion:
In this story, the narrator recounts his complicated love story with a man he met in the event chronicled in the story’s first paragraph:

If I’d pulled out of the Stop & Shop in Provincetown a few seconds later we would never have met. I wouldn’t have sheared off the driver’s side mirror of your Civic, you wouldn’t have smirked as I dropped the cards from my wallet, and I wouldn’t have fallen for your Neptune-colored eyes.

Inciting incident out of the way, Mr. Byrne describes the narrator’s dysfunctional (but realistic) relationship with his boyfriend.  The “I” character is telling the story to “you,” telling you about the fun you had together and how your lives entwined for an all-too-brief time.  The couple eventually drifts apart; the “you” character has some serious psychological concerns.  After the “you” is hospitalized, the narrator cheats a little, though he’s still trying to understand what is happening in his relationship.  The “you” character goes on Depakote for his bipolar manic depression.  In the final scene, the couple returns to the beach house where their relationship began.  I don’t want to give away the ending, so I’ll just say that the narrator has a powerful dream in which he gives his boyfriend what the man seems to have wanted all along.

In an end note, Mr. Byrne explains why he cast the story in second person:

The choice of second person is threefold: one, it provides a narrative that is bipolar in itself; two, it allows me to express anger I’ve felt at the person I am when I’m struggling; and three, it invests the reader in the bipolar experience in a way that third person would not. First person bipolar invites confusion; third person, distance; but second person allows for reader investment and identification.

One of the things I love most about literature is that there are very few wrong answers.  You want to believe that Jane Eyre and Jersey Shore both offer important criticism of the Bush Administration?  Okay.  Cool.  Just support your idea from the text.  So I am going to very respectfully disagree with Mr. Byrne about the point of view of his story.  It really seems to me to be a first-person tale.

Sorry to suggest all of you nice folks to my MS Paint skillz, but here is a graphical representation of the first person point of view:

The narrator is using “I” because he is the one standing in the aisles at Tiger Stadium and is meeting Matt Nokes.  He is there and he is telling you the story.  I met Matt Nokes… 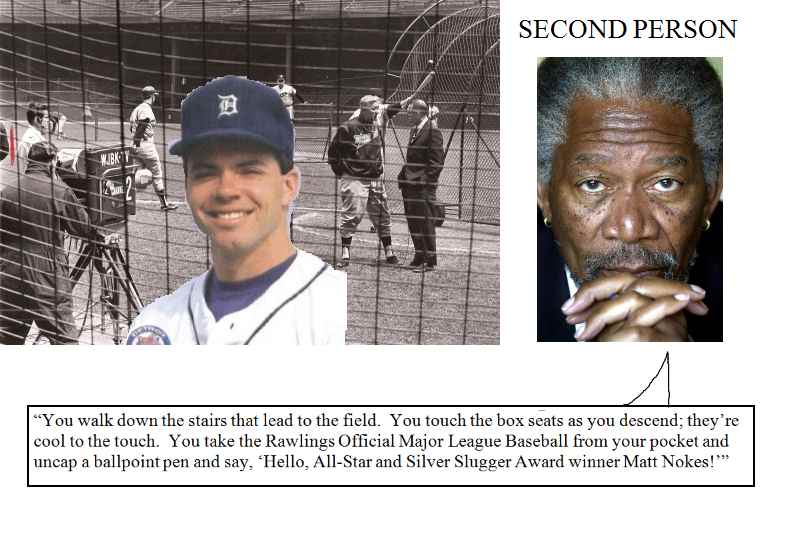 A narrator is telling YOU what YOU are doing and YOU are experiencing what is happening.  In this case, YOU are meeting Matt Nokes.  You’re looking right at him, see?  You met Matt Nokes…

The narrator with a beautiful voice is telling the reader about some guy who is meeting Matt Nokes.  See him?  You see the back of his head because you and the narrator are standing outside of the situation. This weird guy met Matt Nokes…

The accomplished Mr. Byrne indeed uses point of view in an interesting manner.  The first person narrator is telling his boyfriend the story.  (Perhaps in an attempt to explain the action in the title?)  In one way, the point of view puts an additional layer of distance between reader and narrator.  Instead of the first person narrator telling the reader what is happening, it’s a first person narrator telling his boyfriend what is happening and you are the boyfriend.  The POV works, however, because Mr. Byrne wraps you up in the boyfriend’s POV in the same manner as a second person story wraps up the reader.  I suppose the overall lesson is a general one.  Consider how much distance is between you and your reader and your characters.  Each POV has advantages and disadvantages.  In this case, the first person allows you to feel the narrator’s frustration and may remind you of what one of your own relationships was like.  On the other hand, the narrator’s closeness to the man with whom he’s speaking pushes the narrator away a little.  I figured out early on that this was a pairing of two men, but Mr. Byrne’s narrator doesn’t say so very explicitly.  (This makes sense!  Why would one half of an all-male couple point out that the other half is also a guy?  They know each other!)

Mr. Byrne’s story does a lot of things well, but he handles one particularly hairy problem: how the heck do you summarize a long-term romantic relationship in only 4,000 words?  The narrator and his boyfriend spent a lot of time together and did a lot of things side-by-side.  Mr. Byrne allows the narrator to simply chug along and include the highlights of the relationship.

Phew!  Mr. Byrne is allowed to include it all because he gifts his first person narrator with the great advantage of the third person narrator, who can simply say, “Meanwhile, at the ranch…”  The first person POV is often used to provide very close descriptions of small moments.  Mr. Byrne enjoys the best of both worlds.