Title of Work and its Form:  Buffalo Soldiers, novel
Author: Robert O’Connor
Date of Work: 1992
Where the Work Can Be Found:  The book was published by Vintage and can be purchased at all fine local bookstores, including Oswego, New York’s River’s End Bookstore.  Or from Amazon. Or Powell’s.  Just buy it.

Bonuses:  Why not check out the New York Times review of the book?  The novel was also adapted into a film starring Ed Harris and Joaquin Phoenix.  Here’s the trailer.

Discussion:
Specialist Ray Elwood is an Army man stationed in Germany, but he’s not the kind of soldier you see in the recruiting posters.  Elwood uses and sells drugs and works in Colonel Berman’s office, writing letters and helping the colonel write scholarly articles about the art of war.  You have to grease a lot of palms and out-think a lot of people if you’re in Elwood’s line of business, and he’s always a step ahead.  Even when a new Top arrives.  Sergeant Lee doesn’t like Elwood very much; as a former drug user, he can see right through Elwood’s façade.  Sergeant Lee also has a beautiful young daughter, Robyn, who has lost most of an arm for reasons I won’t divulge.  As you might expect, Elwood’s situation deteriorates through the novel and Elwood has new and greater dragons to slay.  The first three-quarters of the book is a page turner; the last quarter is a breathless race to an inevitable conclusion. Re-reading this summary, you might not realize the book is a dark and powerful comedy that is grounded in real human emotion.

Mr. O’Connor happened to be one of my teachers at Oswego State.  (To my great honor, he’s currently one of my colleagues in the Creative Writing Department.)  One of the many reasons he’s a strong teacher is that he offers customized advice to each student in the service of honoring the student’s literary goals above all.  This is a policy that was also held by my great teachers at Ohio State, and a goal I have today in my own teaching. You want to write an experimental thriller starring an anthropomorphic stapler?  That is not at all the style of fiction that I personally enjoy, but great.  Let’s make this the best killer stapler story we can.  You have a sentimental and sincere love story in mind?  That’s not my bag, but what can we do to make this the sweetest and least complicated love story possible.

I have no idea how many students do what I did each time I had a new writing teacher: I got one of his or her books or read some of his or her stories.  (Or plays.)  You may not wish to write a book like Buffalo Soldiers, for example, but you can tell immediately that Mr. O’Connor is a master of description and excellent at maintaining narrative momentum.  Understanding his work allows you to ask more specific questions and to interact in a more meaningful manner.  It’s also a lot of fun to talk to writers about their work.  I remember having a question about one of Erin McGraw’s sentences when I read it…as her student, I was welcome to e-mail her and ask her specific questions about her craft!  (Most writing teachers love talking to students, don’cha know.)  Think about it in another, less scholarly way.  Can it really hurt you if your teacher sees you walking around with a copy of his or her book?  (Especially if it’s not from the library!)

Okay.  Let’s get to the lessons you can steal specifically from Buffalo Soldiers and not just its author.  I have to acknowledge the elephant in the critical room.  Many folks have heaped laurels upon Mr. O’Connor because of the way he used the second person in his book.  (I may be wrong, but it seems as though this point of view has been used more since the Buffalo Soldiers/Bright Lights, Big City era.)

One of the primary advantages of a second-person POV is that you’re explicitly forcing the reader into sympathizing with your character.  Check out the very beginning of the book: 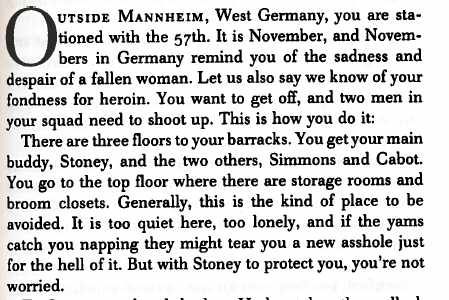 Mr. O’Connor accomplishes a lot with the first two paragraphs:

So Mr. O’Connor does indeed help you relate to Ray with the use of the second person POV.  More importantly, the POV creates a more visceral understanding of some “extreme” actions.  How many of us know what it’s like to cook and shoot heroin?  When you read the book, “you” do.  I’m wagering that few folks who read this know what it’s like to patronize a German brothel.  Well, through the use of the second person, “you” do.  The decreased narrative distance between the reader and Ray helps bridge the gap between them and makes some dangerous and exotic plot developments seem a lot more normal.   If the book were in the first person, some readers may have been more judgmental of Ray’s actions as Ray tried to explain himself to the reader.  In the third-person, the narrator may have seemed very far away from a character who, on some level, just wants others to understand him.

Mr. O’Connor also provides a master class in description.  I hate needles…the narration of the drug use scenes made me just as uncomfortable as if I were in a doctor’s office to get a tetanus booster.  One of the characters decides to get circumcised; the description made me shift in my chair as I read.  Look at the way Mr. O’Connor describes the cooking of heroin, a procedure with which many readers may be unfamiliar: 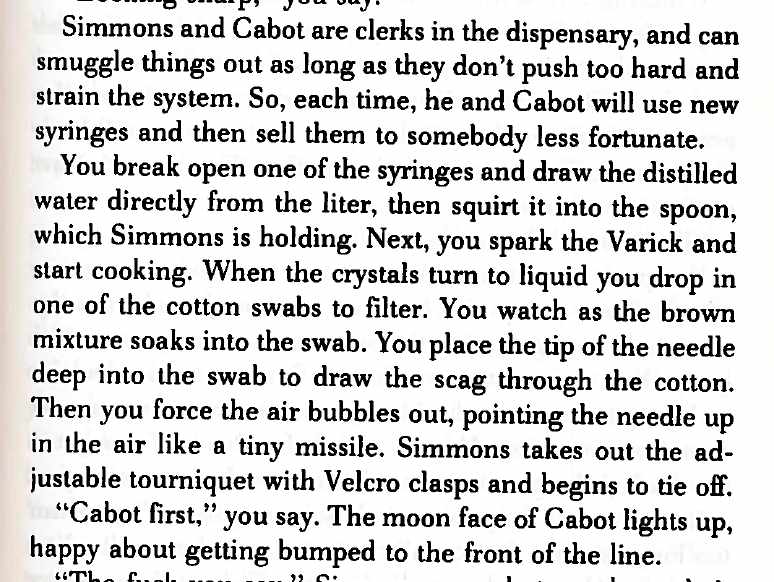 His sentences are short and relatively simple.  There are plenty of complicated and beautiful sentences in the book, but Mr. O’Connor doesn’t employ them here.   Mr. O’Connor wows you with his ability to make music with words, but ensures that he is very clear as to what a heroin user does with the cotton balls.

I won’t spoil the ending, but it’s stellar.  It’s no surprise that Ray gets himself into some big trouble.  Mr. O’Connor sticks the landing, so to speak.  The ending addresses all of the conflicts that he has introduced during the course of the book.  In the space of a few pages, all of the book’s questions are resolved.  Even better, the promise of the character of Ray Elwood is fulfilled.

One thought on “What Can We Steal From Robert O’Connor’s Buffalo Soldiers?”