GWS Advocatus Diaboli: Is the Writing Community Now in its Purge Phase?

We’ve all read Ryan Boudinot’s cri de coeur in The Stranger.  We’ve all read or participated in Facebook discussions about the piece.

I don’t agree with everything the gentleman said, but I’ve been a little surprised by the homogeneity of the response.  (Salon‘s Laura Miller offered a guarded defense of Boudinot’s thoughts.)  Most readerwriters are angry with Mr. Boudinot and few folks have found anything of value in his essay.  (A disturbing number of commenters have made his perceived gender and race part of their analyses…)

One of the reasons that I do GWS is that I wanted to have some very small role in contributing to the community of writers.  We are all different in many ways, to be sure, but aren’t we united in the fact that we’re all writers?  We all know the terror of the blinking cursor and the blank page.  We’re all acquainted with the frustration and sting of inevitable rejection.  We work in different genres and forms, but share many of the same dreams.

Are we really at the point where we must begin purging fellow writers with whom we disagree?  Check out ryanboudinot.com.  No, it’s not a site run by Mr. Boudinot to publicize his works or to communicate with readers and fellow writers.  ryanboudinot.com was, so far as one can gather, registered by someone who wishes to get Mr. Boudinot fired from his job and to discredit him so severely that no one will do business with him.

What other conclusion can one draw?  The creator (or creators) of the site invite readers to contact his employer: 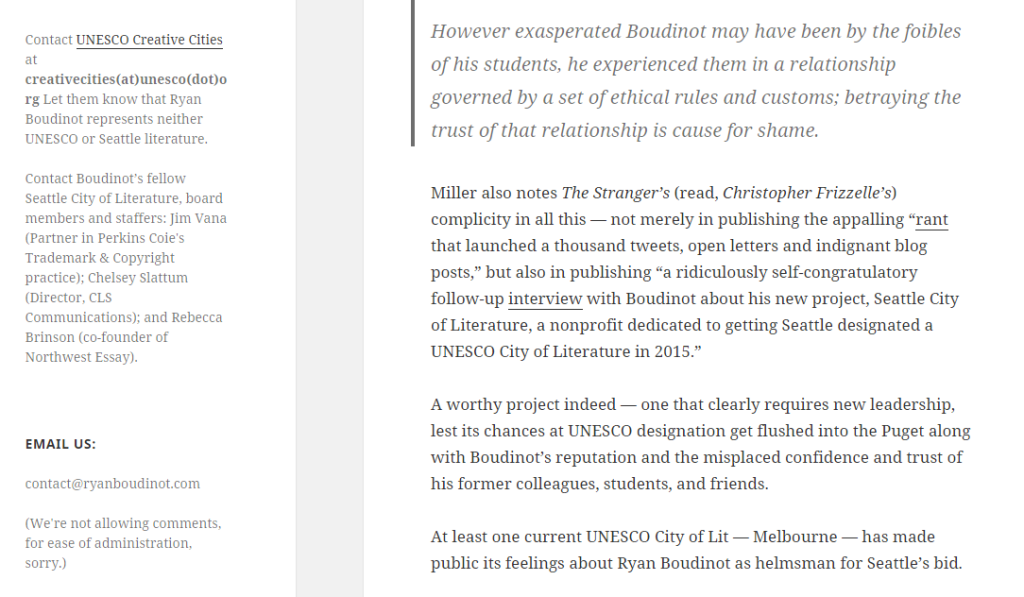 They make the case that his opinions and telling generalized stories about his teaching represent Mr. Boudinot as one who betrays his “colleagues, students and friends.”

The creators imply that Mr. Boudinot a racist, saying that he has a “token” friend who happens not to be white.  They speak disparagingly of his “shrinking pale male demographic” and the “blinding whiteness” of his worldview: 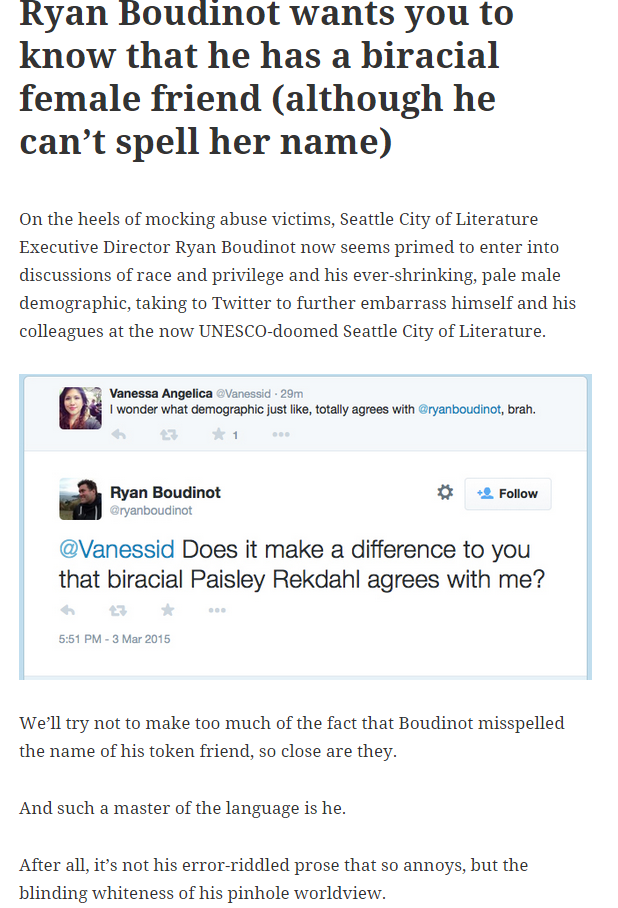 The creators label Mr. Boudinot as “increasingly unhinged.”  (Because of one editorial?)  They encourage people to contact another of his employers. 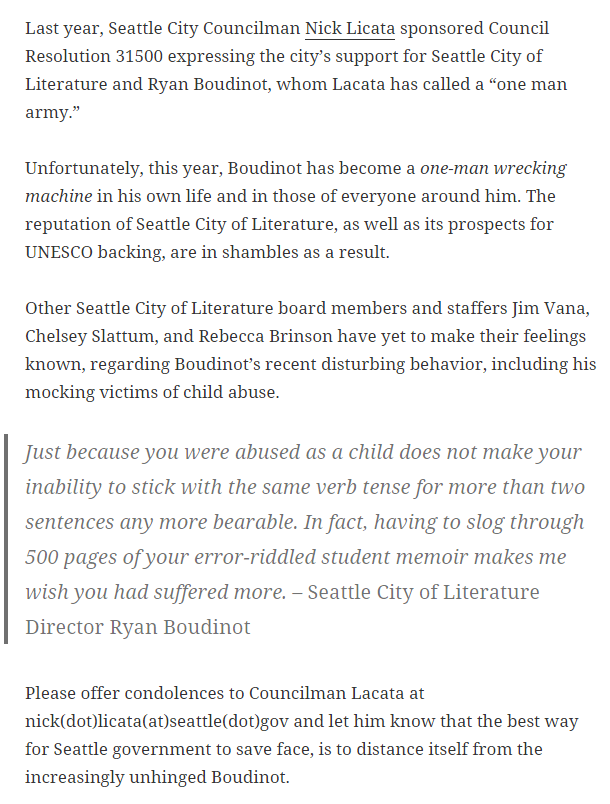 The creator(s) use sexually charged innuendo to unfairly imply that Mr. Boudinot thinks less of female writers and/or students: 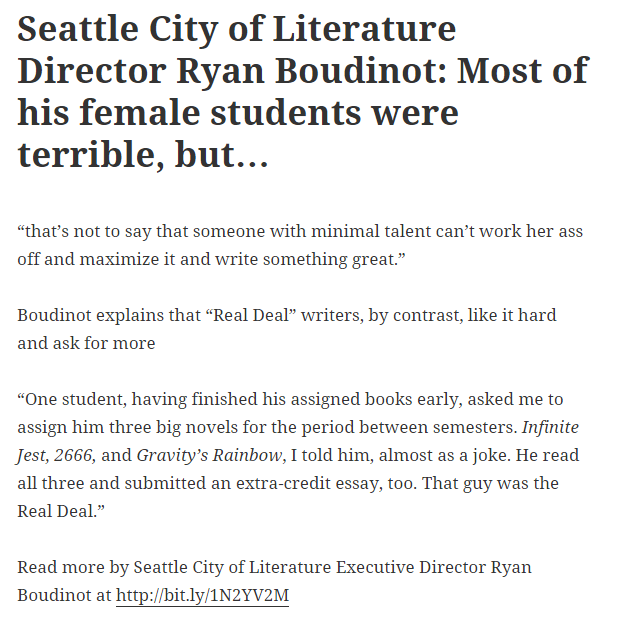 How did we get to this place?  Criticism based upon race and gender are now acceptable instead of criticism based upon one’s writing?  It’s now permissible for writers to turn on each other and to try and get them fired for…expression?  Isn’t that what makes us writers in the first place: our need to share our ideas and selves with others?

I certainly don’t agree with everything Mr. Boudinot said, but I take exception to what seems to be a further push toward ideological purity in the writing community.  It doesn’t strike anyone else as a problem that we should attack someone’s livelihood if we disagree with them or think they’re a jerk?

I have had the honor and challenge of studying in three college writing programs.  On several occasions, my writing was criticized in manners I felt (and still feel) were unfair.  On a few occasions, colleagues and instructors criticized me instead of my writing in ways that pained (and still pain) me deeply.  Have I made the call for any of these people to be fired or purged?  Of course not.

One of the problems the site creator(s) have with Mr. Boudinot is that he could have pushed a student away from wanting to write.  Friends, I have had many dark midnights of the soul that were inspired by teachers.  Some of these crises were absolutely normal.  I’ve been writing seriously since I was thirteen and no one on the planet has a lower opinion of me or my work than I do.  The absolutely normal and necessary feedback I have received from colleagues and teachers has, at times, depressed me greatly.

“Why didn’t I see that this story idea was stupid?”

“Why did I allow such a clunker of a sentence into the story?”

“Why did I choose this subject matter in the first place?”

“Why do I bother writing at all?”

Even though I’ve been writing since before I experienced puberty, none of the novels I’ve written have been published.  I have several stories that I think are actually good, but have not yet found the kind of home of which I think they are worthy.  (These stories will likely never find those homes.)  Many of my dear friends in writing are experiencing fantastic success, basking in the deserved glow of their skill and hard work.  Me?  I’m very grateful to those who have published my work and I think that I have shared a bit of myself with the world, that I’ve manifested some small fraction of the impulse that led me to plug in my father’s Smith Corona typewriter and to plunk out a story in the first place.  But I haven’t achieved a small fraction of the goals I’ve had for decades.

To some extent, teachers and writers simply can’t avoid “doing harm” to each other.  They can’t avoid making a writer (particularly one who has a weak support system) question his or her abilities.  That’s a long-winded way of saying that I don’t think those who have made me feel this way based upon normal criticism did the wrong thing.  You’ll notice that Great Writers Steal is 100% positive (aside from Twilight).  Is this the case because I love every piece of writing I’ve ever read?  No.  I am positive and I try to be generous because writing is a helluva tough racket.

There’s another side of the coin, however.  I have had teachers and colleagues treat me in some of the same ways that Mr. Boudinot treated unnamed students.  These talented and kind people from three different writing communities have committed some of the same “sins” of which Mr. Boudinot is being accused.  These brilliant and caring people have, on rare occasion, treated me with the same lack of understanding with which some of Mr. Boudinot’s critics are treating him.

You’ll note that I don’t offer specifics.  I am not calling for these people to be shamed or psychologically harmed in any way.  Why not?

Every writer and every human being falls short of the perfection to which they aspire.  We are all callous and unpleasant at times.  We have each used our words and our actions to treat others with disrespect.  We have all, at times, had and expressed thoughts that could easily be characterized as racist or sexist.  Do we all deserve to lose our jobs?  Do we all deserve to be purged from what should be a loving community as a result of our lack of ideological purity?  Do we want a community in which expressing unpopular and unpleasant thoughts results in a protracted public shame campaign?  At times, I wonder if I’ve made the wrong choice in being extremely positive on GWS; after all, look how much attention one can get if one feeds the drama monster that has become our contemporary media climate.

Here are some of the charges leveled at Mr. Boudinot by the anonymous creator(s) who registered the site by proxy:

If you deny that you are guilty of these kinds of crimes, you’re not being honest with yourself.

Next
Community’s “Ladders” and Constant Creativity