Friends, the past few days have seen gallons of digital ink spilled over a controversy arising from Lena Dunham’s recent memoir, Not That Kind of Girl.  The book is a set of essays in which Ms. Dunham discusses her life and her philosophies and was highly anticipated by fans of her HBO program Girls.  Perhaps no one was more excited for the book than Random House, who paid Ms. Dunham a $3.7 million advance for the book.  (Rob Spillman wrote a very interesting article about the advance for Salon.)

The controversy began a month after the book’s release when Kevin D. Williamson published a scathing piece in the National Review in which he quoted passages from Not That Kind of Girl that could easily be considered descriptions of child sexual abuse.  Truth Revolt followed suit, quoting the same passages from the book; Ms. Dunham’s attorneys have threatened to sue the site.

I must begin this discussion by pointing out that I have taken great pains to maintain Great Writers Steal’s neutrality when it comes to politics and other controversial issues.  I certainly have my own opinions that are hewn, I like to think, by my open-mindedness and dedication to reason and free discourse.  You may think whatever you like about Ms. Dunham and Girls and her place in popular culture.  GWS is a place where we discuss writing craft-related dilemmas; I am slowly working my way to making my argument that the Not That Kind of Girl kerfluffle raises a number of important issues with respect to creative nonfiction:

We certainly can’t discuss the current Lena Dunham situation without taking a look at the extracts in question, can we?

Ms. Dunham seems to describe engaging in self-pleasure during her teenage years while her pre-teen sister was sleeping beside her: 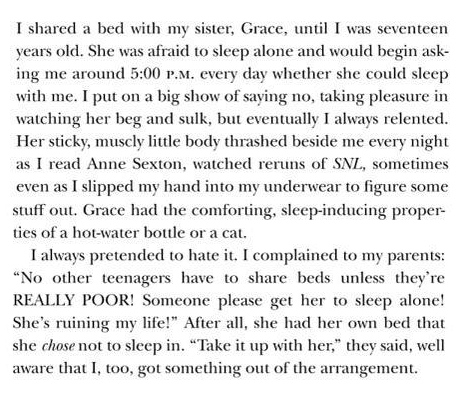 Ms. Dunham describes bribing her younger sister with candy in exchange for kisses on the lips: 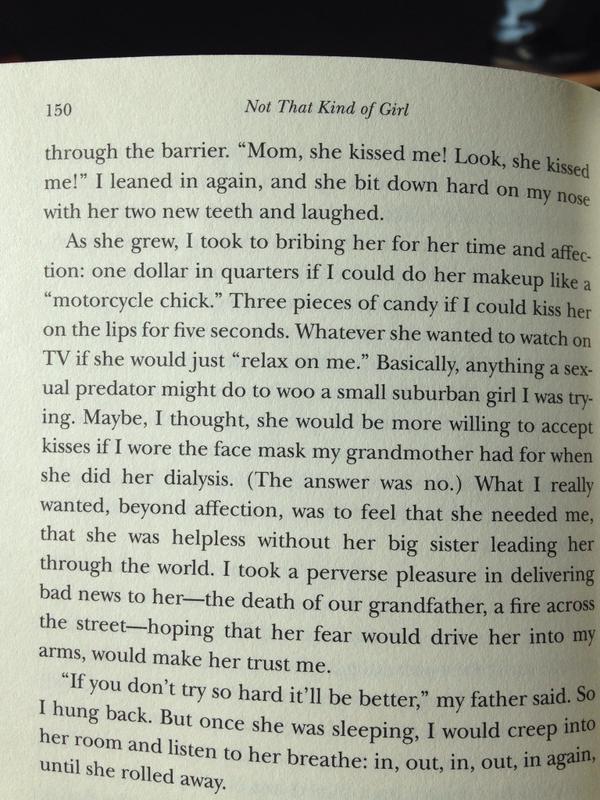 Perhaps most quoted was the passage in which Ms. Dunham describes an incident that occurred when she was seven: 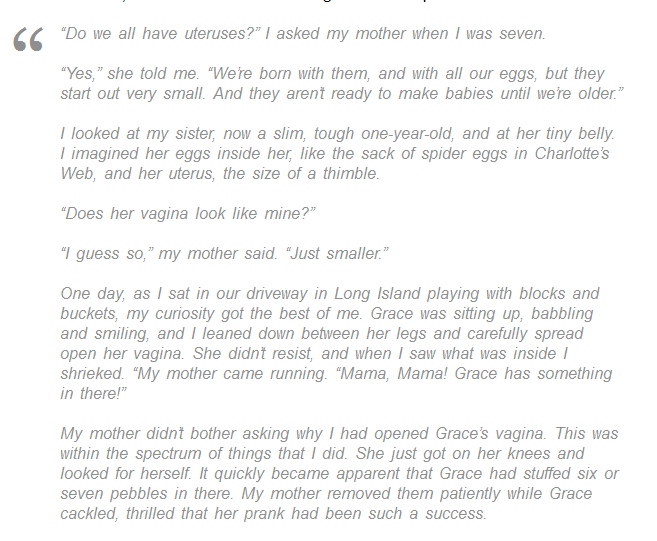 With that bit of business out of the way, let’s devote some thought to the goals Ms. Dunham had in mind when committing these paragraphs to paper:

A creative work, of course, must be evaluated on the basis of the creator’s goals.  By those measures, Ms. Dunham was clearly quite successful.  Perhaps too successful…

So did Ms. Dunham overshare?  Ms. Dunham is part of the Millennial generation, a sea of people who have grown up in a world largely devoid of secrets.  Many folks post EVERYTHING somewhere on the Internet: where they are getting their pizza, how little they like how they look in their mug shot, how funny the Wal-Mart shopper beside them is dressed.

It’s an interesting dilemma.  Where is the line between honesty and oversharing?  And how does that line compare when transplanted to the realm of creative nonfiction?  Mary Karr is incredibly forthright when describing incidents that don’t exactly reflect her best self.  Augusten Burroughs caught a lawsuit after publishing Running With Scissors; some of the other “characters” the book felt they were characterized as a “mentally unstable cult.”  James Frey described his extreme and unbelievable behavior during…oh, nevermind.

Writers of creative nonfiction can’t stop writing about unsavory situations, sexual or otherwise.  Not only do people love that material, but the events in question are deeply personal and don’t happen to everyone.  Creative nonfictioneers must keep describing what sets their lives apart from those of others, even when the descriptions may make a reader uncomfortable.

On the other hand, these passages from Ms. Dunham’s book are pretty hardcore and relate to child sexuality…not exactly the world’s safest or most enjoyable topic.  Would Ms. Dunham have lost some “honesty points” in her own mind had she struck those passages?  How much does it matter that the author didn’t believe that these excerpts described, in the opinion of many, a pattern of sexual and psychological abuse?

Perhaps Ms. Dunham is embroiled in the controversy because she employed a joking and perhaps less-than-reverent tone in her piece.  Now, I’m certainly not one to order a writer around; nor do I wish to order a colleague around.  Perhaps the sentence “Basically, anything a sexual predator might do to woo a small suburban girl I was trying” was one step over the line.  Instead of treating the subject with an appropriate seriousness, Ms. Dunham could come off as flippant to some.

If nothing else, Ms. Dunham has unintentionally started a dialogue that should not end with this little essay.  What do you think?  There is no absolute guideline with respect to what a writer must or should share, but where do you think the line should be painted?

Previous
What Can We Steal From Janelle DolRayne’s “In the style of Joan Mitchell”?

Next
What Can We Steal From Norman Mailer’s Tough Guys Don’t Dance?