What Can We Steal From Stephenie Meyer’s Twilight?

Title of Work and its Form:  Twilight, novel
Author: Stephenie Meyer
Date of Work: 2005
Where the Work Can Be Found:  You can find the book just about anywhere.

Discussion:
Full disclosure: I am not in the target demographic for Twilight and the story and writing don’t particularly do much for me.  The worse angels of my nature sometimes whisper in my ear that I should blast books and pieces I don’t feel are particularly good.  I learned indirectly that this was the wrong way of thinking from Mrs. Iodice, my AP English teacher.  She had us read Jane Eyre, a book that didn’t particularly appeal to me.  Should I dismiss such a classic out of hand?  Of course not.  Even though Jane Eyre isn’t my favorite book, it’s a far more beneficial policy to learn from it than to deride it.  The same principle applies to Twilight.  Millions of people bought the book and people enjoyed the book, so why not investigate what Ms. Meyer’s book has to teach us?

Create characters and situations that appeal to your target audience.

I know very little about women of any age, but Bella certainly seems like a fairly representative teenage girl.  As many cultural critics have pointed out, the book appeals to a young woman’s fear of and desire for sex.  Becoming a vampire and losing one’s virginity changes a person into something else.  There are severe consequences for those who “turn,” including loss of social status, pregnancy and disease.  I’ll happily wager that Twilight has helped countless young people work out their feelings about their sexuality.  Ms. Meyer has found great success appealing to these very common psychological dilemmas.

Tread a new path through an old mythology.

Dangerous mythological creatures one sort or another have been with us for just about forever.  Vampire conventions have changed over the decades.  Ms. Meyer has put her own spin on them.  Her vampires sparkle and play baseball and have extensive families.  While the publishing market will fluctuate for each kind of creature (vampires may be cold now, but werewolves are hot), there will likely always be an audience for well-written books that take a new look at classic sources of terror.

Okay, with that said, let’s look at some specific sentence-level issues from Twilight that writers must consider in their work.

Avoid the overuse of “I.” 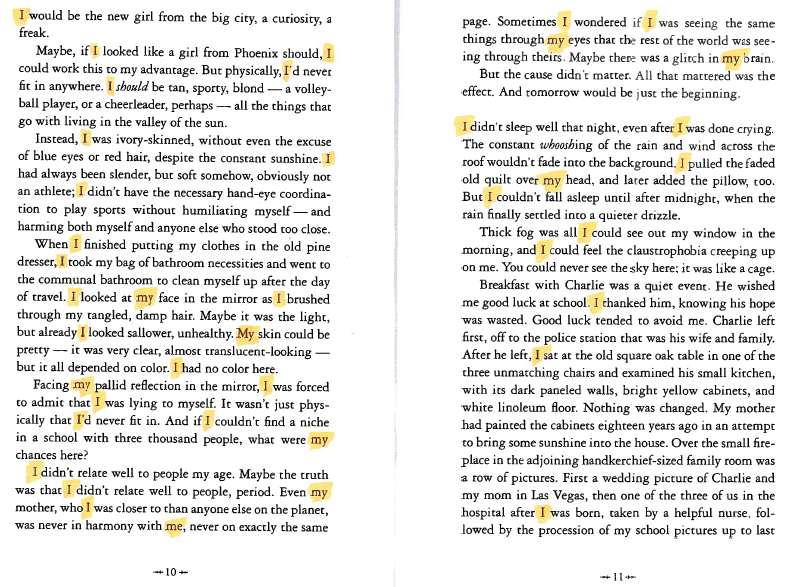 If you are writing in the first person, you’re probably going to use “I” and “me” a great deal.  The use of the word is sometimes unavoidable.  The problem is that the overuse of the word can result in repetitive and lifeless paragraphs.  What is the solution?  Recast as many sentences as you can without “I.”

Replace words such as “they” and “there” and “things” with more descriptive terms. 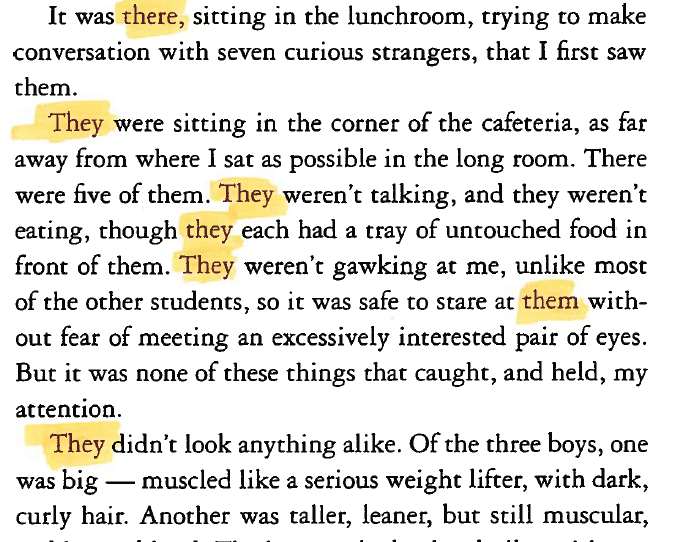 “They” is a very valuable pronoun; the word allows the writer to characterize a group or to describe their actions with great efficiency.  Unfortunately, each time you use “they,” you’re missing an opportunity for characterization or detail.  Look at the above example.  Instead of writing “they,” Ms. Meyers could have taken advantage of the chance to lend more specificity to the work.  Here are some examples of what she could have used to replace a “they” or two:

Are all of these appropriate?  No.  But see how these phrases add a lot more to the story than “they?”

Ignore the need to over-choreograph a scene. 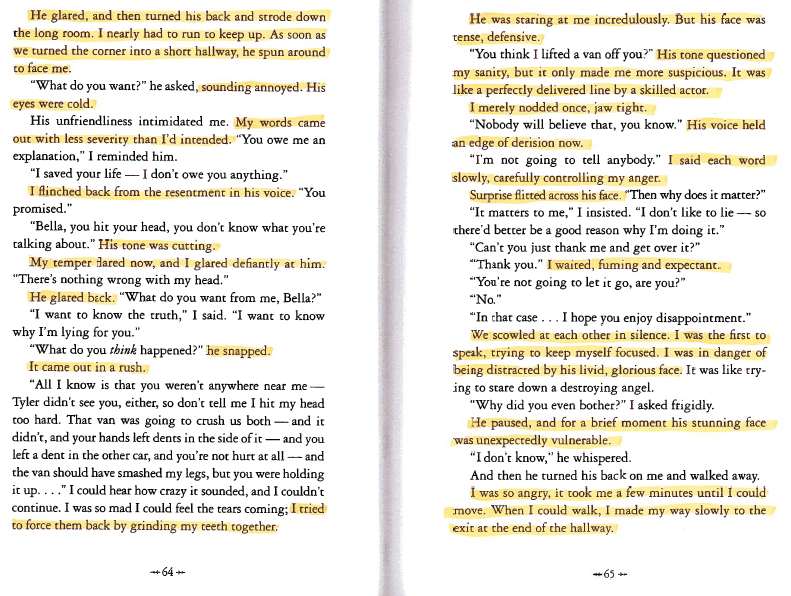 Ms. Meyer offers an awful lot of minute detail for each facial expression her characters make.  She could have focused on the important ones, leaving the reader to provide the rest.  Think of it this way.  What’s wrong with this bit of dialogue?

Anger is the expected tone one would use to threaten someone else.  You only need to specify the tone of the expression if, for example, the character were joking.

The great Lee K. Abbott would also point out another bit of over-choreography.  Ms. Meyer writes, “We scowled at each other in silence.  I was the first to speak…”  Ms. Meyer did not need to have Bella tell us that she and Edward scowled in silence.  How do we know they were silent?  There was no dialogue.  Further, we know that Bella is the first to speak because she has the first subsequent line.  Just as Strunk & White advise us to “omit needless words,” we must also omit needless description.

Restrict your use of adverbs. 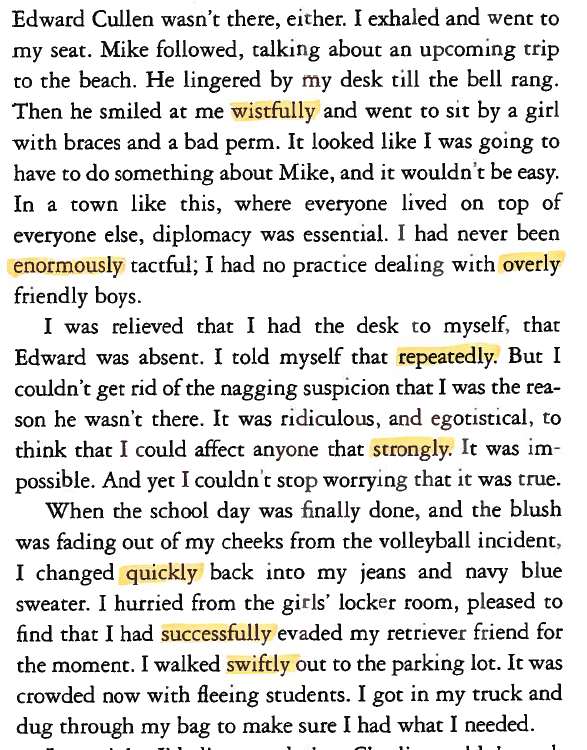 Remember: adverbs are shortcuts and are often superfluous.  Is the word “successfully” necessary in this example?  How about saying that Bella “dashed” instead of “walked swiftly?”

Previous
What Can We Steal From Stewart O’Nan’s Emily, Alone?

Next
What Can We Steal From Eric Puchner’s “Beautiful Monsters”?