Title of Work and its Form: “Bad Little Boyfriends,” short story
Author: Lauren Waterman (on Twitter: @LaurenAWaterman)
Date of Work: 2010
Where the Work Can Be Found:  The story was published by the excellent online journal anderbo.com.  Check it out right here.

Bonuses: Ms. Waterman is a freelance nonfiction writer as well; here‘s a cool article she wrote about why writers shouldn’t write for free and how we’re all harmed by the devaluation of what we do.  Here‘s her profile of Molly Ringwald!

Discussion:
“Bad Little Boyfriends” is a short story that is divided into ten sections of varying length.  The first-person narrator relates experiences she has had with both bad boyfriends and mice.  Ms. Waterman’s narrator offers well-chosen details to communicate how she felt as she removed the “dead, deflated little bodies” of the mice from her fifth-floor walk-up and when she walked in on a boyfriend “sprawled out on the couch” with “two plastic bags, almost emptied of white powder” on the floor.  The narrator is speaking of both boyfriends and mice when she concludes the story by wondering if what she really needs is a cat.

Well, folks.  We have ourselves a story that is separated into sections by the author.  Let’s break it down:

Ms. Waterman’s story does not possess the “standard” structure of a short story.  (Not that there really is one.)  Instead of beginning at the beginning and unfurling a tale, she put together a series of vignettes that do the same work as a “standard” story once you consider them all together.  The process by which you tell a story by vignettes is the same…but different.

It’s one thing for a critic/web site person to actually jot down the structure of a piece like this.  It’s also something that you should do for your own work.  Once you’re forced to confront the structure of your poem or short story or photo essay, you will better understand the decisions you made.  (And whether or not you wish to make different decisions!)

Let’s think about the difference between “traditional” structure and “experimental” structure through the lens of fine art.  One of my favorite paintings is “Landscape with the Fall of Icarus,” which may or may not have been painted by Pieter Bruegel, but dates to the 1560s.  Here’s the painting: 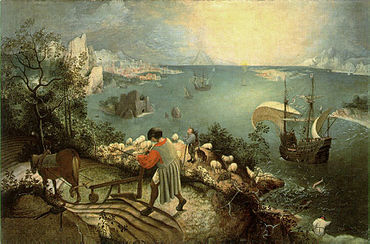 This is a completely different kind of painting.  Some folks would say that the spatters are random and there was no artistic drive behind the work, but they are mistaken!  Just like Jackson Pollock, you should take the tools of your artistic trade and use them in different ways.  The only real rule is that you need to bring your reader along for the ride.