What Can We Steal From Bret Anthony Johnston’s “Encounters with Unexpected Animals”?

Title of Work and its Form: “Encounters with Unexpected Animals,” short story
Author: Bret Anthony Johnston
Date of Work: 2012
Where the Work Can Be Found:  The short story debuted in Esquire in March 2012.  The editors have been kind enough to post the story here.  Mr. Johnston’s work was subsequently chosen for Best American 2013.

Bonuses:   Here is Mr. Johnston’s perceptive review of Tony Hawk’s book, How Did I Get Here?: The Ascent Of An Unlikely CEO.  (The piece is also an interesting look at Mr. Hawk’s cultural significance.  The man has even done a skateboard trick in the White House!)  Here is an excerpt from a craft essay Mr. Johnston wrote for Tin House‘s The Writer’s Notebook II.  Here is Mr. Johnston’s Amazon page.

Whoa.  This is a cool first for GWS.  The story I’m writing about was made into a short film.  (Seemingly with Mr. Johnston’s consent, of course.)  Take a look here:

Discussion:
“Lambright had surprised everyone by offering to drive his son’s girlfriend home.”  Bad idea, friend!   Lambright and his wife aren’t sure they like Lisa.  The girl is two years older than their fifteen-year-old son and has been around the block several more times than he has.  Lambright feels that Robbie is not ready for a green-haired girl with tattoos and piercings.  (Mom and Dad are also pretty bummed that she stole their jewelry and alcohol.)  After laying down the exposition, Mr. Johnston puts Lambright and Lisa in a car all alone.  The loving father stops the car on an isolated road and tells Lisa to cut his son loose.  Unfazed, Lisa asks Lambright what will happen when she, a poor little seventeen-year-old girl, arrives home dirty and crying after running away from the mean man who drove her into the wilderness to take advantage of her.  She jumps out of the car and starts putting her plan into action as Lambright wonders what the future will hold for him.

I love this story; it’s short and sweet and dramatic and simple and effective.  What else do you want in a piece of fiction?  The biggest reason the story is successful relates to a storytelling device that is as tried-and-true as it is powerful.  Mr. Johnston establishes a power balance in the story and then reverses it.  Lambright is a respectable grownup and has all of the privileges and rights assigned to that group of people.  Here’s what their relative positions look like when filtered through my awesome Paint.NET skillz: 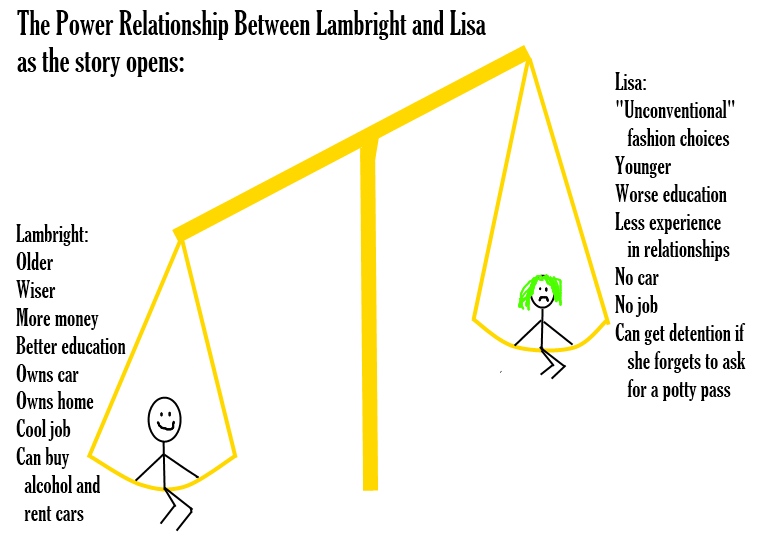 The status quo persists in the story until the climax (of course), which is when we should be upending the normal relationships of our characters.  What does the change look like when Lisa makes use of one of her only real trump cards?  The balance looks like this: 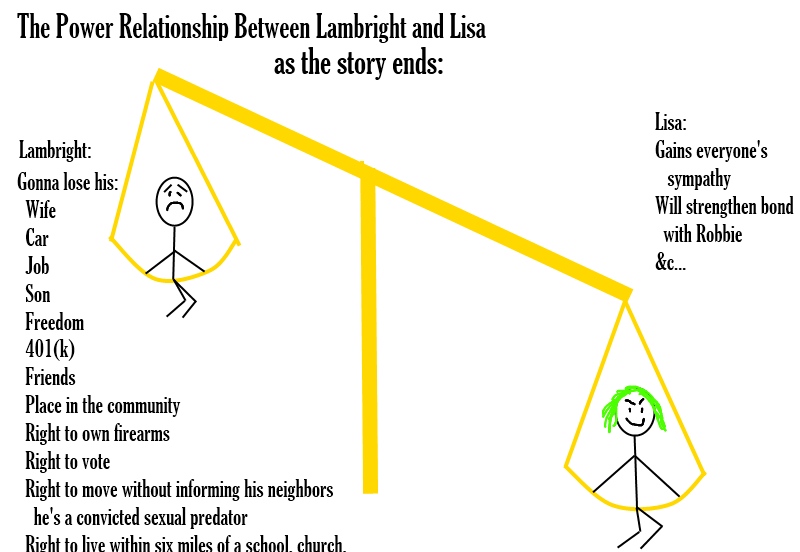 The story is compelling because Lambright’s life is never going to be the same after the events that transpire in these few moments.  The third-person narrator has made it clear that Lambright’s sins are mild at best.  Maybe he’s going a tiny bit overboard in trying to protect Robbie, but the reader is 100% sure that he hasn’t done anything terrible.  (And we can all agree it would be terrible for a grownup to drive a seventeen-year-old out to the middle of nowhere and to proposition/force themselves upon the youngster.)  The massive power shift is also the move that allows Mr. Johnston to accomplish such a big wallop of emotion in only five or so pages.

What about the ending of the piece?  Here’s the last sentence:

He was disoriented, short of breath. He knew he was at the beginning of something, though just then he couldn’t say exactly what.

Does Mr. Johnston tell us exactly what happened to the poor guy?  Nope.  Lisa’s running home through the woods.  Is she really going to go through with her threatened course of action?  That’s up to you.  Is Lambright’s life really going to be ruined?  That’s up to you, too.  Is Lisa really going to mess with Robbie?  Stop asking these questions!  You get to decide for yourself.  Some folks may not enjoy such ambiguity, but I like it.  In a way, it doesn’t matter.  The court hearings and the arrest and the newspaper stories…these are not the most compelling parts of such a story.  What is the most compelling part?  The story represents the split second in which (to my thinking) Lambright realizes that his life as he knows it is over.

Oh, and here’s a quick observation.  The story begins with the protagonist’s name.  LAMBRIGHT.  He’s as docile as a lamb around the seventeen-year-old woman and isn’t really straying from doing what is right.  Cool name choice.

Previous
Hey, Why’d You Do That, Keith Rebec?

Next
What Can We Steal From Joe Oestreich’s “Towing and Recovery”?