Hey, Why’d You Do That, Keith Rebec?

Check out Keith Rebec’s story, “Looking out for the Dead.”  The piece appeared in Split Lip Magazine and can be found right here.

Sure, you might want to know Mr. Rebec’s thoughts about how his story fits in the context of animal-centric literature.  I wanna know why he did some of the little things in the story.  Mr. Rebec was kind enough to answer some of my questions about his work:

1) Robert Earl Keen has certainly put together an accomplished career as a singer and songwriter, but he’s not as well-known as some other country artists. Why’d you choose to have Eugene listen to him in the truck instead of someone else?

KR: Excellent question. When I began writing this story, it became clear early that Eugene didn’t really follow the mainstream. He’s more of a Bob Seger or Robert Earl Keen type of guy. So, when I first pictured him jamming in his truck, Robert Earl Keen happened to be playing. Now, looking back, I can see a little of me there since I’m a fan of Robert Earl Keen. However, it was never my intention to put Robert Earl into the story. It just happened that way.

2) There are a couple of sentences on the first page that are constructed in a similar fashion, but one has a comma and the other doesn’t:

“When he reached the apex of the ridge the lights of a police car flashed behind a blue Volvo sedan.”

“When he reached the truck, he took a leg in each hand and swung it over the truck rail.”

How come you put a comma in the second sentence, but not in the first?

KR: In revisions of a work, I evaluate every sentence multiple times, and I always consider sound and flow among other things. This is just an example of where the dependent clause, at least to me, flows better without a comma. Now, some grammar folks would probably say it must have a comma since the dependent clause has five or more words, or there must be a comma to mark where the independent clause begins. But I’ve never been one to really follow rules, if you want the truth.

3) Deidra drives a silver Toyota Camry. Why’d you choose that car and color?

KR: Another good question. I don’t know. I do believe, though, as we write and get deep into a story, things just come naturally that highlight more of a character’s personality. For example, if Eugene had a Rebel flag painted on the side of his truck, it would’ve changed how I perceived him while writing, and the same could be said for how the reader will view him.

4) At the end, the protagonist’s romantic rival steps out of the house. You say, “He held a plastic spatula in his left hand and some egg clung to it.” You could have cast the sentence in a number of ways:

“He held a plastic spatula in his left hand; some egg clung to it.”

“He held a plastic spatula in his left hand—egg clung to it.”

“He held a plastic spatula in his left hand. Fried egg clung to it.”

KR: You’re right. Any of the above examples would work fine. Again, like one of the questions asked earlier, it was more of a sound thing. I also didn’t want to slow the scene down, and “and” is a good word to use when one wants to keep things rolling. 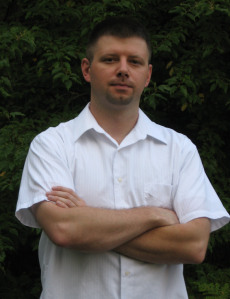 Keith Rebec resides in the Upper Peninsula of Michigan. He’s a graduate student working on an MA in Writing at Northern Michigan University. His writing has appeared or is forthcoming in Shenandoah, The Portland Review, Monkeybicycle, Necessary Fiction, Hobart, Midwestern Gothic, Devil’s Lake, and The Doctor T. J. Eckleburg Review, among others. He’s also the managing and nonfiction editor for the literary journal Pithead Chapel, and you can learn more about him at www.keithrebec.com.
Tweet

Keith Rebec, Split Lip Magazine, Why'd You Do That?

Previous
What Can We Steal From James Yu’s “White Rice”?

Next
What Can We Steal From Bret Anthony Johnston’s “Encounters with Unexpected Animals”?