What Can We Steal From Joe Oestreich’s “Towing and Recovery”?

Title of Work and its Form: “Towing and Recovery,” short story
Author: Joe Oestreich (on Twitter @HitlessWonder)
Date of Work: 2011
Where the Work Can Be Found:  The short story debuted in Issue 32 of storySouth.  You can read the piece here.

Bonuses:   Here is the author’s Amazon page.  Mr. Oestreich was on NPR.  He’s living the Weekend Edition dream!  Don’t you love seeing writers talk about their work?  Here is an interview Mr. Oestreich gave during the 2013 Ohioana Book Festival:

Discussion:
Geez, what a great story.  Mike Dulaney drives a tow truck and spends his days pulling people out of the snow or cleaning up after accidents on the highway.  He loves his wife Lisa, his stepdaughter Kimmie and his twins.  The problem?  Well, poor Mike has a lot of them.  A couple years ago, Mike sorta snapped.  After towing a vehicle from the scene of a deadly accident, he was weighed down by confusion and grief.  Two young men-football players-were killed in the course of doing something dumb.  The kind of thing he did when he was young.  Mike drove the wrecker onto the high school football field and left it there.  His subsequent job search didn’t result in very much…until he was offered a driving job by Phil, who also happens to be Kimmie’s biological father.  Mike hates the guy, but needs the money.  Another problem: Kimmie is thirteen.  She’s starting to make the same mistakes that he made as a teenager; the same kind of mistakes that resulted in Lisa being pregnant at sixteen with Phil the Jerk’s child.  Conflict everywhere!  (In addition to beautiful writing.)

So, I love this story for a lot of reasons, but I really love how Mr. Oestreich set up the conflicts in the story.  There’s a TON of exposition to release.  (I was wondering if the story should be a novel.)  Mr. Oestreich needs to communicate:

That’s not even all of it.  As a result of the sixteen tons of necessary exposition, Mr. Oestreich simply didn’t have the option to describe the protagonist’s situation for two paragraphs before sliding into the dramatic present.  So what did he do in the first scene?  He introduced parallel conflicts that relate to the others:

What is the effect of this technique?  It reminds me of what a classical composer does in a symphony.  Beethoven, for example, used the first three movements to layer in references to the themes and harmonies that would come to full flower in the Fourth Movement of his ninth symphony.  (Why not listen to the whole thing?  It will do you good and restore your faith in humanity.)

Would we love that beautiful fourth movement if we hadn’t just heard the themes in different contexts?  Sure.  The experience is deeper and more fulfilling, however, if we’re eased into the primary conflicts in the symphony or in the story.

For those of you who didn’t have a great music teacher early on, here’s an example from popular music.  Look at how “I Want to Hold Your Hand” begins.

The dum-dum-DUUUMMMM,  dum-dum-DUUUMMMM prefigures the the “I get high” figure in the song.  This guitar growl is the emotional complication that makes the worksomething more than a boring “I love you” ditty.  At first, this guitar part is a simple introduction, but…well…it turns out to represent “the feeling” one has after one “holds the hand” of the person he or she loves.  (If you don’t know what I mean, ask your parents to tell you.)

Here’s another example.  The Cher Lloyd song “Want U Back” introduces parallel conflict representative of the whole.

The song begins with Ms. Lloyd’s “frustrated grunt.”  We hear the sound every four bars throughout.  What is this sound?  Anger?  Well, it sounds like she’s angry about the situation as we hear the verse.  Halfway through the song, however, we learn that the frustrated grunt has prepared us for an…alternate representation of what the grunt could mean.  (Again, ask your parents.)

Mr. Oestreich is also really, really good at choosing details.  Mike is already unhappy that he has to spend time with Phil and he’s clearly feeling the psychic weight of knowing that Kimmie is not his child and that a small part of Lisa will always be HIS.  It’s perfectly dramatically appropriate that Kimmie has called her “real” dad to pick her up when Mike arrives to retrieve her.  It also makes sense that a writer would allow Mike to see the phone and realize that Phil is ALWAYS AROUND.  Mr. Oestreich, however, goes a step further and twists the knife by describing the caller ID on the phone.

Kimmie had countless options.  She could have called him “Biological Dad.”  “Sperm Donor.”  “Father in the Eyes of the Law.”  Kimmie labeled him “Daddy Phil.”  I dunno if you agree, but I think this choice is as mean as it is perfect.  “Daddy” suggests the child that Mike fears is disappearing as Kimmie grows.  Having already called him “Mike,” the intimacy suggested by the name definitely explains what Mike does to the phone.  (You wonder how Mike is classified on Kimmie’s phone…)

Here’s a small thing that is influenced, as always, by the great Lee K. Abbott.  Lee emphasizes the importance of making sure you get the small details right in a story.  If you make up a street name in a random real city, a reader who knows that municipality very well may be knocked out of the story as he wonders where the character is on the map.  Our job as writers, of course, is to keep the emphasis on the drama.  Now, I’m not criticizing Mr. Oestreich here, but I had a personal “drop out” moment that isn’t his fault.  Early in the story, he mentions that Mike enjoys taking his family to Tiger Stadium to see the best baseball team ever take the field.  Well, I just so happen to be a big Detroit Tiger fan.

In fact, here’s a picture that I took just after Todd Jones closed out the game against the Yankees (ew) on the day my grandfather was buried.  (Does that seem weird to you?  I don’t think so.  I would rather have my friends and family enjoying our shared passions and thinking of me with joy instead of being miserable and mopey.  I suppose I’ll find out for sure if I can get make any friends or accumulate family before I die.) 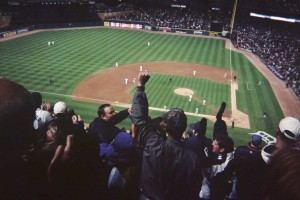 And here’s a picture I took of Tiger Stadium.  I had the fortune to be able to spend some time with the old girl at Michigan and Trumbull. 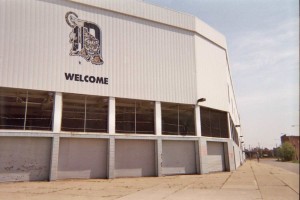 Okay, I’ll get to my point.  Mike takes the kids to Tiger Stadium, which became the Tigers’ spiritual home (as opposed to physical home) in 2000.  Mike’s twins aren’t that old…the characters use cell phones…Kimmie the thirteen-year-old has a cell phone…Gah!  During which year does the story take place?

Now, I don’t think that my unease is Mr. Oestreich’s fault.  I’m just pointing out how we can unintentionally alienate a reader.

Previous
What Can We Steal From Bret Anthony Johnston’s “Encounters with Unexpected Animals”?

Next
What Can We Steal From Leesa Cross-Smith’s “Making Cowboys”?