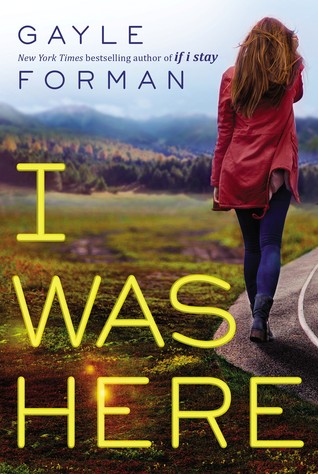 Gayle Forman’s I Was Here and the Three-Act Structure

Cody and Meg were best friends before Meg went off to college at a private school in Tacoma, Washington.  A little over a year later, Meg commits suicide by drinking industrial-strength cleaner.  As you might expect, Cody wants to know what happened and why her friend chose to end her own life.  Through the course of I Was Here, Cody undertakes a journey to come to grips with her friend’s choice and (obviously) reaches catharsis and a greater understanding of herself.

Gayle Forman is one of the superstars of YA, and for good reason.  Her books confront big themes and are packed with big drama and give the reader big feels.  Her book If I Stay was made into a major motion picture:

I Was Here is a well-written book, but it’s not a light, laff-a-minute novel.  This is a good thing!  We should all have well-balanced reading diets.  The book is also a good example of contemporary YA, which is why it came to mind after a recent writers’ group meeting I attended.

A bright young man who has little experience as a writer, but is plugging away at a first novel (good for him!) described what he was writing.  The young man had an interesting conceit and characters in mind, but, as he acknowledged, he was not sure about what would happen to them.  All of that is just fine.  If you are a beginning writer, the most important thing to do is put pen to paper.  Over and over again.

During the meeting, we all talked about the three-act dramatic structure that is so popular in screenwriting.  Why is this structure popular?  Because it works.  Works that adhere to this paradigm have a beginning, middle and end and stuff happens in a logical and compelling fashion.  What else do you want from a story?  If you don’t know about the three-act structure, I advise you to immerse yourself in the works of Syd Field.

I animatedly helped the bright young man who was burning to write a YA novel think about how the vast majority of great novels and films adhere to the three-act structure.  I hope to see him again and give him my marked-up copy of I Was Here, but why don’t I break down the three-act structure of the book for the benefit of all GWS readers?

There are any number of ways to describe the three-act structure and I don’t want to steal someone else’s method, so I’ll sketch out my own.  The point is that each story has three acts.  The first establishes the world and pushes the protagonist on their journey.  The second chronicles the protagonist’s journey as they make progress on their mission.  The third ratchets the tension as the mission succeeds or fails.  In the middle of each act is what I am calling a “plot rocket:” a turning point that changes the protagonist’s situation and keeps the plot moving.

Have you seen Terminator 2: Judgment Day?  If not, you are missing out.  If nothing else, enjoy James Cameron’s rock-solid writing and direction.  Here’s how the story breaks down: 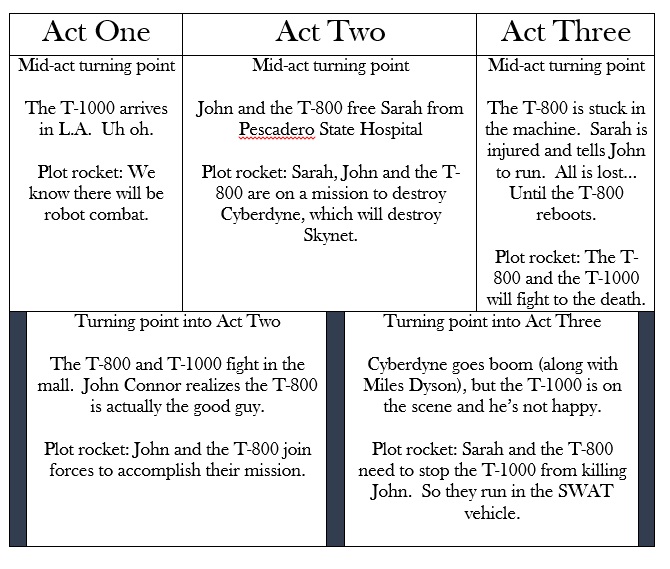 Want another one?  You’ve probably seen Stand By Me, the film based upon Stephen King’s beautiful novella “The Body.”  (Which could easily be considered a YA book.) 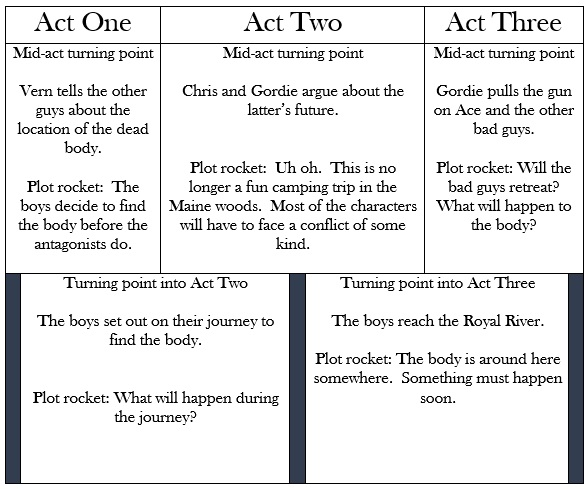 What about I Was Here?  Well, here you go: 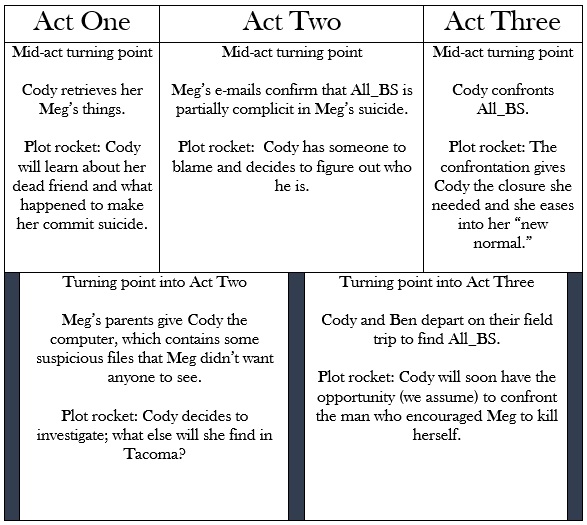 What’s the overall point?  Ms. Forman employs the three-act structure to keep the story plugging along.  Yes, Cody is very sad.  She could linger for years in that sadness over the course of 2,000 pages.  But that would not make for a very interesting book.  No, Ms. Forman makes sure that things keep happening, things that are both driven by Cody’s actions and things that happen to her.

Not only should things HAPPEN in a story, but the ultimate point is that the protagonist’s situation should change.  Their emotions should change.  I don’t know if there’s such a thing as static drama.  The three-act structure diagram reveals Cody’s emotional journey.  Through the course of the book, she experiences shock, grief, anger…all of the emotions!  (Particularly when she opens up to Ben a little bit.)

The young man who inspired this essay found the idea of breaking a story in this manner a little counterintuitive; that’s okay.  Just about everything about writing involves practice.  Next time you watch a movie or read a book, why not try to break it down into its three-act structure?  Next time you are dreaming about your next story, think about where the plot point you have in mind may fit into the structure.

Here’s another way to think of it.  If you are thinking, “I want to have a big fight between the the person on Earth who represents evil and one who represents good.”  Okay, great.  Guess what: that’s probably going to be the turning point in the middle of Act Three.  Why?  The idea as I expressed it is pretty heavy.  It feels like a climax.  If you have Luke Skywalker fight Darth Vader at the beginning of Act Two…you have a lot of movie left.

Let’s say you had a crazy idea about a person in prison who plays opera over the PA system for the other inmates to enjoy.  Okay, great.  But you need story before and after that.  A guy playing opera over a PA system is not a punchy climax, really.  You’ve seen The Shawshank Redemption; I just described the turning point of Act Two, according to Syd Field.

Here.  I’ll even give you a blank version of the chart I made.  Can you train yourself to break down the stories you enjoy by their crucial turning points?  Ms. Forman can, and look what it did for her! 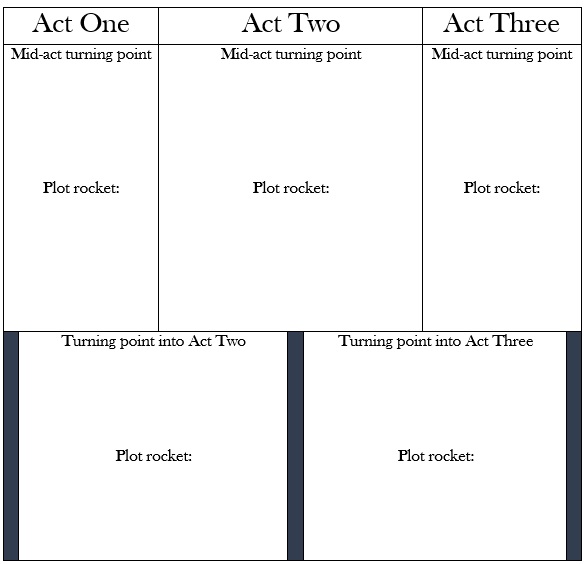