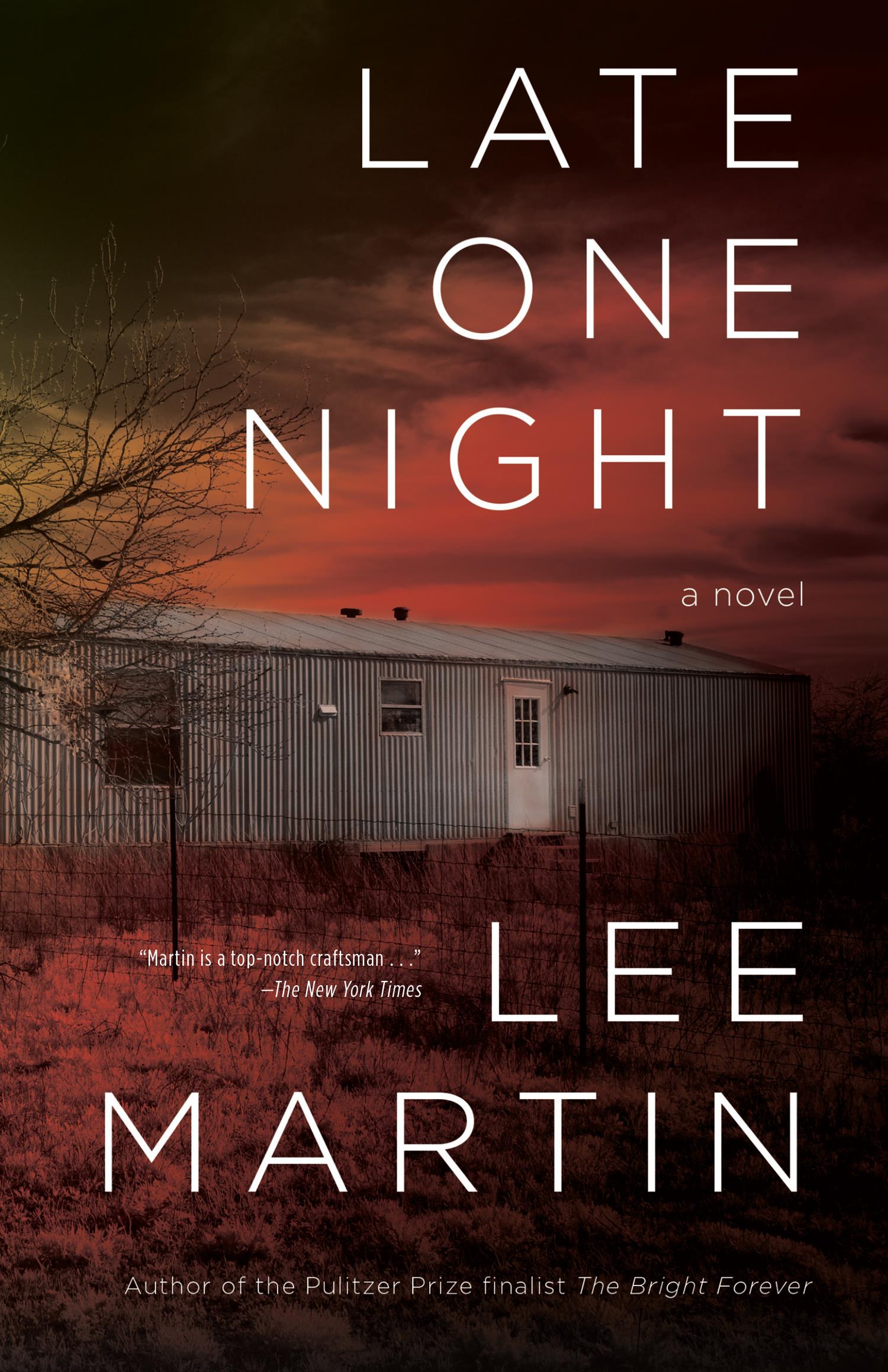 Lee Martin’s Late One Night and the Power of Characterization

There are couples like Ronnie and Della Black in every small town; this one happens to be Goldengate.  A young man and young woman fall in love or something like it and create children who become a happy burden.  Husband and wife do the best they know how, but they are increasingly alienated by time and worries about money and the increasing feeling that they determined the course of their lives too early.  In Late One Night, Lee Martin turns his perceptive and empathetic eye on such a couple and the fire that ends and changes the lives of countless denizens of Goldengate.

Mr. Martin, whose excellent 2006 novel The Bright Forever earned him a Pulitzer Prize nomination, once again offers the reader a generous look into the hearts and minds of people who are often overlooked or whose perspectives are ignored outright.  It’s not a spoiler to reveal that what happened late one night is a fatal fire that claimed the life of Della Black and three of the seven Black children.  Wayne Best, Laverne Ott and the other townspeople were already dubious about Ronnie…did you hear?  He left his wife and all those children to take up with young Brandi Tate, who’s already carrying his baby.  Ronnie receives even less sympathy when it becomes clear that his car was seen was speeding away from the scene just as the fire started to burn.

Late One Night is not as much a procedural mystery about a possible arson as it is a deep exploration of the aftermath of a great and permanent sadness and the flawed person who may have been responsible.  Like his other works, the book draws upon one of Mr. Martin’s strengths as a writer: the ability to humanize characters who may otherwise be granted little mercy.

We would all do well to take this lesson to heart.  Whether you’re writing about a man who may have killed his wife and most of his children, or may have inappropriate feelings (as in The Bright Forever), or an old man who may be responsible for the death of his best friend fifty years ago (as in River of Heaven), stigmatized characters deserve to be humanized, not dehumanized.  The general population is often reductive and simplistic with regard to society’s outliers, but writers do not have that right.  Have we all committed the kind of sins that inspire Mr. Martin’s novels?  Of course not.  We are, however, not the same in the dark as we are in the light and we seek out people who are kind enough to see us for who we are on the whole.

How much should you tell the reader, and when should you tell them?  It’s never easy to say, but Late One Night offers powerful lessons to help writers solve this dilemma.  Mr. Martin begins this novel with a brief interrogation scene.  In Chapter 1, Sheriff Ray Biggs asks Ronnie to unravel the mystery that has been on countless lips across Illinois since the news of the fire broke: “You better start talking…you better tell me something I’ll believe.”  So we know that something truly awful has happened.  In Chapter 2, Mr. Martin takes us back to the trailer fire.  In Chapter 3, Mr. Martin goes back even further in time to introduce us to Della and the kids.  The author continues this trend, filling his precious page space with the details of the life that Della and Ronnie shared.  What do we know almost immediately?  Della and at least a few of the kids are dead or at least very, very seriously injured.  Do we need any more information at this point?  No.  Perhaps the biggest reason is that we don’t yet care about Della and the kids on anything more than a surface level.  Mr. Martin tells us the story of the dissolution of the Black marriage so we will be emotionally invested in their fates and the way what happened Late One Night reverberates through Goldengate.  Mr. Martin is telling us, in effect, that a character’s death is not as important as the life that he or she led.

Everyone who has ever lived has death in common.  Someday, we will each breathe our last, speeding our reversion to dust.  What is much more important?  Much more interesting?  What happened between birth and death, not the circumstances of either.  Mr. Martin ensures that his focus is properly placed.

Speaking of focus, Late One Night is also contrived to play to another of the author’s strengths: character development.  Now, the plot of the book chugs along at a pleasing pace and I was always curious what would happen next, but it seemed to me that the book’s plot was, in a way, released through character.  Because Mr. Martin devotes so much time to immersing us alongside the people of Goldengate, the reader begins to wonder about characters in the same manner they usually do about plot.  In this way, the inherent questions we have about the plot are placed alongside those we have about character.  For example:

PLOT: How did the fire start?  Was it an accident?  The baby inside Brandi Tate is growing full speed ahead; how will the new child complicate matters?

CHARACTER: Will Captain and Shooter ever reach the kind of understanding about each other that fathers and sons deserve?  Laverne Ott seems like such a decent person…how will she feel about what happens to the remaining Black children?  Gosh, Ronnie and Della had such an unhealthy relationship and now the latter is gone; is Ronnie a terrible human being, or is he just a product of his circumstances?  She may have been a teensy bit of a homewrecker, but is Brandi all that bad?

See how these separate and equal qualities of writing drive the reader forward?  The overall point is that the writer has an obligation to give the reader reasons to continue.  We can fulfill this obligation in a number of ways.  If the setting of our story is not very compelling, then we must make the other elements of fiction more compelling.  Here’s a wholly unscientific chart gauging how much Mr. Martin privileged each element of fiction: 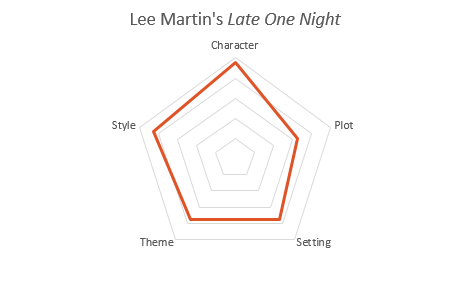 Of course, I liked the plot very much and advise you to pick up the book, but Late One Night is not a whiz-bang action thriller like Transformers 11: Tin Man’s Revenge.  That film, in turn, will have put very little emphasis on character, setting and theme…which makes sense; do you watch a Transformers film to see where Shia LaBeouf or Mark Wahlberg are on their life journeys?  Nope.  The writers and directors of those films pack the screen full of style and plot to maintain your attention in the same way a clicker attracts the attention of your puppy.  Mr. Martin uses the right tools in the right stories to please his audience.

Having just finished my own far inferior novel, I’ve devoted a great deal of thought as to how I should begin each of the brief chapters that tell my character’s story.  But gosh, isn’t it hard to begin and end each chapter with a powerful and true statement about human existence that also keeps your narrative humming?  Let’s take a look at the opening sentences of the seven chapters of the book:

1: Ronnie swore it was talk and nothing more.

2: Della and the kids-the oldest fourteen, the youngest still a baby-lived in a trailer just south of the Bethlehem corner.

3: Earlier that evening she’d scooped the hot ashes from the Franklin stove into a cardboard box.

4: Della, nor anyone else for that matter, had any way of knowing that a few weeks before the fire, Shooter had forced himself to go through more of his wife’s things, a task he’d been doing a little at a time since she died back in the spring.

5: The trouble between Ronnie and Della came to a head one evening in early September when she showed up at a Kiwanis Club pancake supper with her long blond hair hacked off and ragged, tufts of it sticking out from her head and hanks hanging down along her slender neck.

6: In his heart Ronnie often felt all scraped out and empty over the way his life with Della was-too much want, too much lack, too much desire running up against the no-way-in-hell of it all.

7: By Thanksgiving, Della’s hair was growing back.

Will you excuse me if I pat my own back?  Look how strong the focus on character is in each of these lines.  It’s very clear that Mr. Martin wants us to get to know his subjects very well.  Just as importantly, these first lines slam us into the “mystery” about the fire (1, 2, 3, 4) and inform us about the crucial relationship between Ronnie and Della (5, 6, 7) and immerse us in the Goldengate community (1, 2, 4, 5, 7).  I think the important lesson here is that first lines should not be mere throat clearing that delays the narrative.  Even if your creative work is bigger on setting than plot, you need to give the reader some reason to continue, something that Mr. Martin does with expertise.

If you haven’t yet read Late One Night, you have my assurance that I have not ruined any of the beauty or big surprises in the work.  Mr. Martin’s restrained and gorgeous prose is a joy in itself.  Like much of the author’s work, this book makes you think about the people around you in a different way.  Instead of serving as mere extras in your own life, those people sharing the diner counter with you, walking beside you in the park…they are real human beings who invariably lead complicated lives and we do well to embrace the depth of the humanity found in others instead of making the easier choice to languish in a dark realm filled with shallow stereotypes.

Note: In addition to being a great writer, Lee Martin is also a very generous teacher.   If you are also a wordsmith, please consider following his Facebook group.  In addition to informing you about his own work, he links to his very useful blog posts.  He also has the Twitter (@LeeMartinAuthor).  Don’t we live in fascinating times?