What Can We Steal From Jay McInerney’s Ransom?

Title of Work and its Form: Ransom, novel
Author: Jay McInerney (on Twitter @jaymcinerney)
Date of Work: 1985
Where the Work Can Be Found: The book can be found in most great independent bookstores.  (If they don’t have Ransom in stock, the kind booksellers will be happy to order it for you.)  You can also order the book online.

Bonuses: Here is Susan Cheever’s contemporary review of the book for the Chicago Tribune.  Here is an exclusive PBS video in which Mr. McInerney discusses when George Plimpton accepted one of his stories for The Paris Review…his first publication.  Here is a short story that Mr. McInerney published in Five Chapters in 2007…twenty years after the piece was stolen from his apartment.

Discussion:
Christopher Ransom is a young man who has been unofficially exiled to Japan.  He doesn’t want to spend time with his shallow TV producer father in California, and what took place at the Khyber Pass unplugged him from the rest of the world.  So Ransom teaches English to eager Japanese students and has spent two years learning discipline from the martial arts.  Unfortunately for him, Ransom is not destined to have a relaxing, carefree life.  A Vietnamese singer is dating one of his friends, another American ex-pat.  She’s also dating a man in the Yakuza.  (Talk about external conflict!) “Frank DeVito, ex-Marine and current Bruce Lee clone” seems to have it out from Ransom, too.  Through the course of this quick read, the protagonist finds the answers to some of the big questions that have been haunting him for some time and have shaped his life.  (Yes, that’s cryptic.  Just read the book!)

One of the things that impressed me most about Ransom was the way Mr. McInerney began the book.  While this novel is certainly “literary” (for whatever that means), the author does not kick off the narrative with, for example, a dry description of the history of the sod behind the family farm and how each blade was influenced by the ten generations of family members who had tilled it.  Zzzzzz.  No, Mr. McInerney jumps out of the gate with a scene at Ransom’s dojo in which we learn what the protagonist has been doing in the Land of the Rising Sun.  Even better, we get to read a scene in which two of Ransom’s colleagues are sparring.  Here’s an extract: 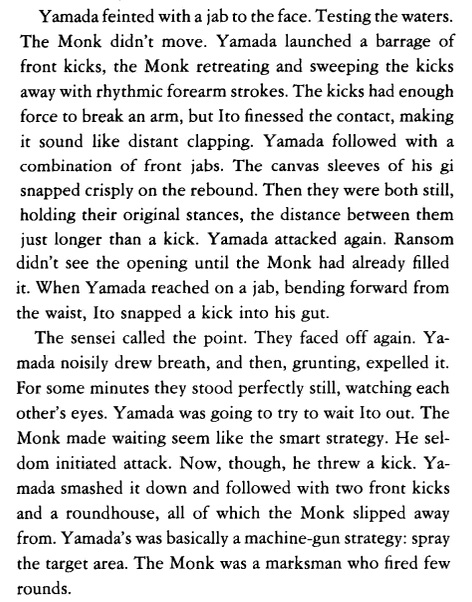 Look at how clear the sentences are!  Now, Mr. McInerney certainly has the ability to unspool some complicated and beautiful sentences, but he reins himself in here: a good idea considering that he’s essentially providing a play-by-play for what is very much a visual series of events.  Some things are better seen than described, right?  At times, however, we writers are required to cast prose examples of visual events.  Which would you rather do?  Watch Game 5 of the 1984 World Series or read a written account of what happened?

Here’s the challenge: how do you end a chapter in a way that gets your reader’s pulse pounding while simultaneously stimulating his or her intellect?  Let’s break down what Mr. McInerney did with his sentences: 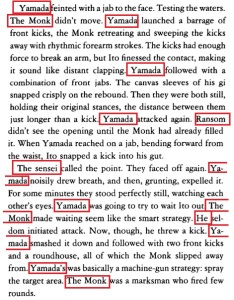 Beginning with the subject of the sentence is a felicitous move because the reader has no trouble keeping track of the characters involved in the fight.  These kinds of lines could get a little boring if they fill a whole book, but this sing-songy approach (“Bob did this. Sally did that.  Bob did that back.  Sally did that back to Bob”) is helpful in small doses.

Mr. McInerney shifts point of view just a little bit in the book.  Doing such a thing is ordinarily a cardinal sin and a sure way to invite constructive criticism from a workshop colleague or a first reader.  Mr. McInerney, however, switches to DeVito’s perspective by necessity.  Why?  Some of the events that shape Ransom’s life and fate take place far away from Ransom, who can’t and shouldn’t be privy to them.  Further, the climax and conclusion of the book is rendered more satisfying because of these shifts in the point of view.

More importantly, Mr. McInerney may flip between consciousnesses, but he never takes his narrative focus off of Ransom.  (The book bears his name for a reason!)  I think this is a case of “don’t break the rules until you know them.”

Previous
What Can We Steal From Norman Mailer’s Tough Guys Don’t Dance?