What Can We Steal From John Green’s Looking for Alaska?

Title of Work and its Form: Looking for Alaska, novel
Author: John Green (on Twitter @realjohngreen)
Date of Work: 2005
Where the Work Can Be Found:  The book can be purchased at all fine bookstores.

Bonuses:  Mr. Green and his brother Hank are prolific makers of videos; these short films confront a wide range of subjects and are a lot of fun.  Find the “vlogbrothers” at their YouTube page.  Mr. Green answers a number of questions about Looking for Alaska on his site.  (The answers are very intelligent and generous.)  You should also know about Mr. Green’s tumblr page.  Mr. Green’s work has inspired a lot of very cool young people to do very cool things.  Look at this incredible (and pretend) trailer that some folks made for a hypothetical film adaptation of the book:

Discussion:
Miles is a bright young man who is seeking education and enlightenment.  This search leads him to leave his Florida home for Culver Creek Boarding School, a place with rigorous educational standards and a lot of brilliant students.  The Culver Creek student body is very diverse, especially in terms of socioeconomic status.  Miles’s new roommate Chip (The Colonel) is very poor, but some of his classmates are delivered to school by limousine.  Whattaya know, Miles meets Alaska, an incredibly beautiful, smart and troubled young woman.  Miles joins his new circle of friends in their adventures; he gets in a little bit of trouble and learns an awful lot in his first year in boarding school.

The book has a structure worth discussing.  There is a big event that takes place halfway through the book.  Each short chapter is labeled to indicate how many days BEFORE or AFTER that event the chapter takes place.  Mr. Green has chosen a felicitous way to imbue that big event with importance:  A COUNTDOWN.  Imagine you’re sitting down to read the book for the first time.  You start reading and discover that the first little chapter is taking place “one hundred thirty-six days before.”  You’re wondering, “before what?”  Before long, Miles/Pudge meets Alaska and the Colonel and Takumi and Lara and that number keeps decreasing.  Things are going so well!  Miles is learning a lot about life…he’s having a good time with friends…he’s breaking the rules a little bit by drinking and staying up late, but he’s not doing anything TOO crazy…what could go wrong?  As the number of days before the big event dwindles, our anxiety increases exponentially.  Why?  The events are getting bigger.  Miles and his friends are planning a big prank and he’s getting closer to Alaska, which is what he wanted all along.  Here’s a graphical representation of how we’re feeling as we read: 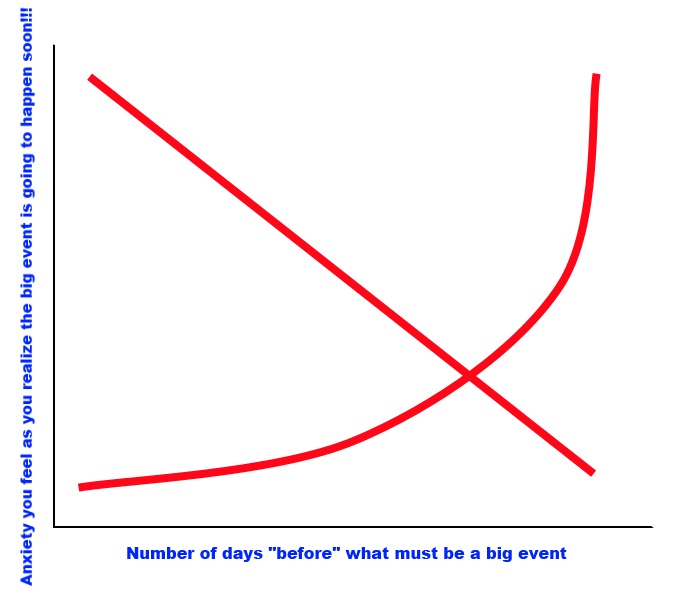 How does Mr. Green amp up the drama so much?  He uses that COUNTDOWN.  Dramatists love the countdown because it makes an explicit promise that SOMETHING INTERESTING IS GOING TO HAPPEN.  What are some other cool countdowns?  The Apollo missions resulted in men walking on the Moon.  How did those missions kick off?  A countdown, of course.  Those decreasing numbers make a promise: once we’re down to zero, there’s going to be a massive and beautiful explosion that (hopefully) propels the spaceship into orbit.

What do we all do on December 31?  We sit around the TV and wait until that countdown.

Again, there’s an implied promise.  After we get down to zero, there’s going to be a new year ahead of us, one filled with hard work and good fortune.  (One hopes.)

The countdown feels right because it’s natural.  Each of us spent, give or take, nine months in the womb.  Our parents were counting down to the moment we were to arrive.  Mr. Green borrows the power of the countdown to make us anticipate the big event that changes the characters; the suspense we feel  boosts its power and meaning.

I’m writing a likely-never-to-be published Young Adult novel, so I’ve been reading a bunch of them.  (Makes sense, doesn’t it?)  I grew up reading books by great writers such as Judy Blume and Bruce Coville.  What’s just one thing that Mr. Green has in common with these two?  They treat young adults, well, like adults.  It has been a few years since I was a young adult myself, but boy, do I remember Teenage Ken and what was happening around him.  While I did not drink underage (not that I want a medal), I was somewhat aware that it was happening around me.  Some of my classmates were doing drugs, legal and otherwise.  Many of them were having sex and most of them really wanted to.  Mr. Green allows his young adult characters to act, talk and think in a manner that is realistic for young adults.  It took a few pages, but I was happy to see the first “naughty” word in the book.  I love that Miles falls quickly and deeply in love with Alaska because that’s exactly what young adults do.  (And Alaska was totally my thing when I was seventeen: smart, fun, pretty and damaged enough to understand my damage?  I wouldn’t have been able to resist falling in love with her!)

As I expected, Looking for Alaska has been challenged by parents and administrators.  Why is this crazypantslooneycounterproductivetosociety?  A story that doesn’t feel real is not going to affect the reader.  A great work must somehow create the appearance of reality in fiction.  This is a concept called verisimilitude.  Let’s say you’re late to work.  Your boss asks you why you are late and you tell him or her:

It was the craziest thing.  I was driving here-on time, I might add-when I saw this bright light ahead of me.  It was an alien spaceship.  All of a sudden, I was on board and they were doing all of these funny experiments on me.  But it wasn’t all bad; they took me out to Pluto and showed me mountains made of diamonds and let me watch a game of Space Baseball before they zapped me back into my car.

The boss is not going to believe your story.  Why?  Because it does not have the appearance of reality.  Nor does a story focused upon dozens of teenagers that is devoid of drinking, smoking, sex, defiance of authority, staying up late and lying to parents.

No, friends, being late to work requires you to come up with a story with much more verisimilitude.  So, you were late to work because you overslept.  But you don’t want to come out and TELL YOUR BOSS you have trouble getting up on time.  What cover story can you tell that FEELS real?

Hey, I’m so sorry.  One of my tires was really flat and I simply couldn’t get here without taking the time to fill it up a little.

See?  Makes sense.  Realistic.  It happens every day.  (It happened to me not too long ago.)  Above all, it’s our job to serve the reader, not to write books according to the desires of people who aren’t going to want to read the work anyway.

Miles/Pudge and his friends have a nemesis, of course.  The Eagle is the dean of students.  He sees everything that goes on and doles out punishments accordingly.  The characters (quite appropriately) see him as something of an out of touch and needlessly authoritarian figure.  After all, he busts them for smoking, sends them to Jury and spends his days trying to ruin their fun.  And there is a big threat; he already expelled two people last year for three big Culver Creek sins.

When you’re young, it’s tempting to think of authority figures as something other than a real person.  As a robot who only serves a function.  Ever see Police Academy?  If not, you should.  Captain Harris is (pretty much) an authoritarian jerk who just wants to make life hard for the protagonists/heroes of the film.  See?

Dean Wormer from Animal House-seriously, go watch that one right now if you haven’t seen it-is primarily a one-dimensional jerkface.

I grew to love The Eagle because Mr. Green slowly builds him into a real character.  In the beginning of the novel, of course, The Eagle must be a jerk.  He needs to lay down the law.  He can’t show any soft underbelly because he needs to be seen as an authority figure.

Maybe it’s just because my own YA years look so small in my rear view mirror, but I identified with The Eagle a little bit.  He’s not TOO MUCH of a jerk.  More importantly, he’s not mindless or heartless.  He knows that you have to let young people get away with a little bit.  Adolescence is about learning how far you can bend the rules without breaking them and ending up in REAL trouble.

102 days “after,” the main characters play a prank on the school.  I don’t want to ruin anything, but it’s a good kind of prank: no one gets hurt, no property gets damaged.  The Eagle knows darn well that Pudge, et. al. are responsible for the prank.  Does he expel them?  Does he punish them?  No.  He knows that adding to their grief would be counterproductive and that the prank is part of the process by which they are recovering by the book’s big event.

Characters (usually) shouldn’t be all good or all bad.  The Eagle is an immovable authority figure/narrative obstacle most of the time, but Mr. Green very wisely gives him a couple moments that reveal his deep humanity.  Mr. Green is in great company.  Another writer who refused to turn his law enforcement officer into a one-dimensional cartoon character was Victor Hugo.  We love Javert (from Les Miserables, obviously) because the events of the book change him and reveal the very human struggle inside him.

Previous
What Can We Steal From Jacqueline Kirkpatrick’s “Disconnected”?

Next
What Can We Steal from Jason Gray’s “CIRCUS CIRCUS”?