What Can We Steal From Helen Ruggieri’s “Buying My Blue Dress”?

Title of Work and its Form: “Buying My Blue Dress,” creative nonfiction
Author: Helen Ruggieri
Date of Work: 2013
Where the Work Can Be Found:  The piece made its debut in the Winter 2013 issue of The Citron Review.  You can read the work right here.

Bonuses:  Here is a poem Ms. Ruggieri published in The Adirondack Review.  Here is a brief biography of Ms. Ruggieri.  (She really knows her stuff.  Folks like me shouldn’t feel bad that we haven’t accomplished as much as she has…we’ll get there.)  Why not learn about Ms. Ruggieri’s chapbook at the Mayapple Press web site?

Discussion:
This first-person piece of creative nonfiction finds Ms. Ruggieri purchasing a blue dress.  She considers how the dress came to be; how the frock may have been put together by a Guatemalan woman who is as hard-working as she is poor.  While Ms. Ruggieri is in a shop, a “young girl” is caught stealing; the owner of the shop deliberates how to handle the situation.  All of this deep thought has added meaning to the dress; Ms. Ruggieri ends the piece with a poetic flourish.

Upon finishing the piece, I was a bit surprised that Ms. Ruggieri left the reader hanging in a way.  Whether or not we’ve shoplifted from a dress shop, we’ve all done things for which we hope to be forgiven.  The young girl could be in for a lot of hassle if the shop owner calls the police…or she could feel the immense relief that washes over us when we receive mercy from another human being.  Ms. Ruggieri doesn’t tell us what happens to the young girl, who becomes the center of an impromptu bit of theater and a part of the history of the blue dress.

Most of the time, leaving the audience hanging can be considered a mistake.  Why aren’t we bummed that Ms. Ruggieri doesn’t tell us whether or not the girl catches a larceny charge?  I suppose it’s because the omission keeps the focus on the subject of the piece: the dress.  While Ms. Ruggieri is the person who is describing the story, the greater focus should remain on the dress and that’s where the focus remains.

Objects have a history and old things may have lived many lives.  I’m currently trying to figure out how to get a Parker 51 fountain pen in fresh and working order.  Here is a picture of where I am at the moment: 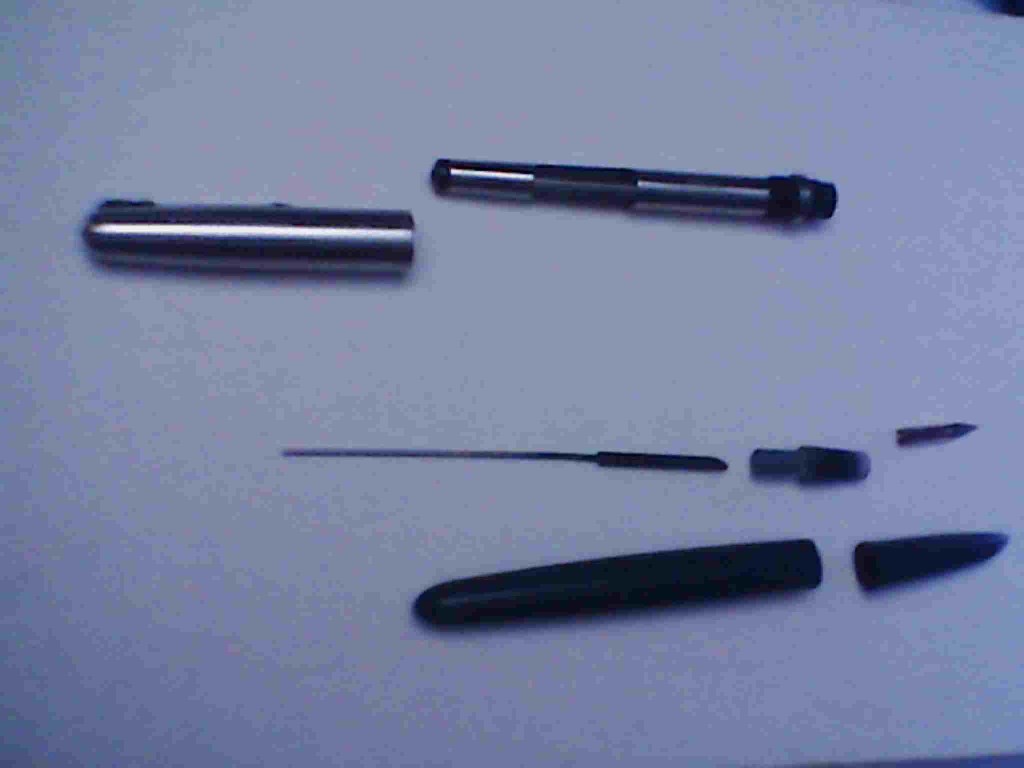 (I know the picture’s crummy; I took it with my inexpensive MP3 player.)  I’ve soaked and disassembled the pen, now I’m researching to make sure that I don’t ruin the beautiful object.  The pen had a previous owner; if I told this Parker 51’s story, I would focus a little bit less on the people whose lives were shaped by those who held it and a little more on what the pen did.  (Who knows?  Did it sign a wedding license?  Was it used to complete a contract by someone who was buying his or her first home?)  Ms. Ruggieri is a participant in the story, but the dress is the star.

We must take a look at the ending of the piece, of course.  After four and a half paragraphs of prose, Ms. Ruggieri flexes her strong poetic muscles by finishing the piece in abstract:

Whenever I wear that blue dress, it wavers, the way a flame does in a breeze, and the orange breaks through old window glass -

Ms. Ruggieri switches from prose to poetry and does so in a graceful fashion.  How?  She signals to us that we’re going to make a switch.  What a beautiful metaphor, comparing the flapping of the dress to the flickering of a wind-touched flame.  Having tasted some poetry, we don’t mind that she’s broken from prose completely in those last two lines.  One of the great blessings of the written word is that you can do ANYTHING.  You can send your character through time and space.  You can tell the story of a pen or a dress, all with a few keystrokes.  A writer’s obligation, however, is to do what he or she can to make sure the reader understands the twists and turns.

Previous
What Can We Steal From Ayşe Papatya Bucak’s “Iconography”?

Next
What Can We Steal From Steven Millhauser’s “A Voice in the Night”?