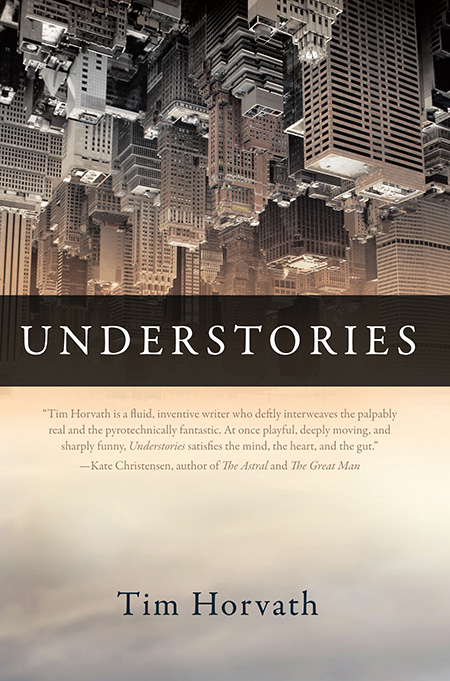 Tim Horvath is one of the writers I admire for their ability to tell interesting stories against interesting backdrops in interesting ways.  Like T.C. Boyle, he is equally comfortable writing a “traditional” story about a divorcee who has a brother who is in perpetual search of his next get-rich-quick scheme and a German expat arborist who taught biology alongside Heidegger as Hitler launched his pathetic and effective attack on Jewish intellectuals.  Mr. Horvath’s collection, Understories, weaves a tapestry of imagination, alternating between good, old-fashioned short stories and short shorts that demonstrate how exciting contemporary literature can be if we privilege idea and narrative.

Please follow along by reading the story.  Understories is more than worth the purchase price and you should really consider buying it from its publisher, Bellevue Literary Press.  The book is also available at Barnes & Noble, Amazon, and Kobo.  May I also suggest that you get the book from your local indie bookseller?  That’s what I did.  The fine folks at The River’s End Bookstore in Oswego, New York are always happy to get you any book that you like and the same can be said for the owners of the indie store nearest you.  If you are on a college student’s budget (or that of an adjunct college teacher), you can read the story through your library’s database; it first appeared in Conjunctions.

In this installment of the GWS First Page Inquisition, I will take a look at the very beginning of “The Discipline of Shadows,” a story that Mr. Horvath was inspired to write by a random exercise suggested by his writing group.  If you juxtapose the anecdote describing the story’s origin with the story itself, you’ll see the intersection of inspiration and creation.  Mr. Horvath was not held thrall by the initial spark that led him to put pen to paper; he let the idea evolve and ended up telling the reader a ripping story.

Without further ado, let’s look at the first page of Mr. Horvath’s story and see what makes it so great and effective.

Up on the chair, I reach for the ceiling and beat the vents, sending mold fluttering downward.  Like some black rain, it lands variously on me, on chipped, yellowing tiles, on the paperwork fanned out over my desk.  It speckles the latest budget, leaves a trail of powder on the glossy cover of the newest International Journal of Umbrology.  It must be going into my lungs.  I think about miners descending, invisible until the shaft collapses and the cameras swarm. Maybe, I think, this is what we need-some tragedy.  Something more than mere scandal.  More than Lew and his lawyer.  More than the death of a department, which is like an animal, already limping, vanishing at last under the wheels.

I won’t have time to change my shirt before the big meeting, and for a moment I regret this. After all, lawyers and trustees, the titled and brass-nameplated, will be there.  Lew’s “representation,” all the way from Lower Manhattan.  At yesterday’s department meeting, the guy sat with Lew, hovering at the edge of my vision, a thick-browed smudge of pleated charcoal.  Finally, I wanted to confront him.  “Mr.  Vadrais,” I wanted to say, “at the end of a workday, when you exit Two Fourteen Pearl, do you ever pause to take in the shadows?”  I felt them like a chill, then, those revenants of an older New York, strewn across the narrow, birdshit-encrusted streets.

But I held my tongue.  He would have been mystified, and the rest of them would’ve all thought I was losing it.

That’s it.  257 words.  Let’s do an inventory of all of the exposition that Mr. Horvath crammed into the first page of his story:

The first page does its job because it does the basics, introducing character and tone and setting; the reader is quickly immersed in the world of the story.  Mr. Horvath is also wise to establish some stout stakes.  What will happen to this “discipline of shadows?”

The most important function that the first page serves is to ground the chronological narrative in the context of the rest of the story.  Now, I really loved this story, or else I wouldn’t have written about it.  But Mr. Horvath violates some of the Aristotelian Unities in a beautiful way.  The first page of the story is one of many sections that take place in a wide range of settings and over a great many years.  Ordinarily, bopping through time in a Whovian fashion might make it hard to understand what is going on.  Instead, Mr. Horvath introduces all of the bits that are important in the dramatic present before dropping sections that are small patches of exposition or miniature narratives.  For example, we get a detailed description of the state of the Umbrology department, advice for applying to such a department and a digression about the shadows that make a person fall in love with the field.  These sections might be seen as tangents if Mr. Horvath hadn’t made a solemn promise on the first page: that he will tell you the story of how the Department of Umbrology slowly fades into darkness like the surface of the moon during a lunar eclipse.