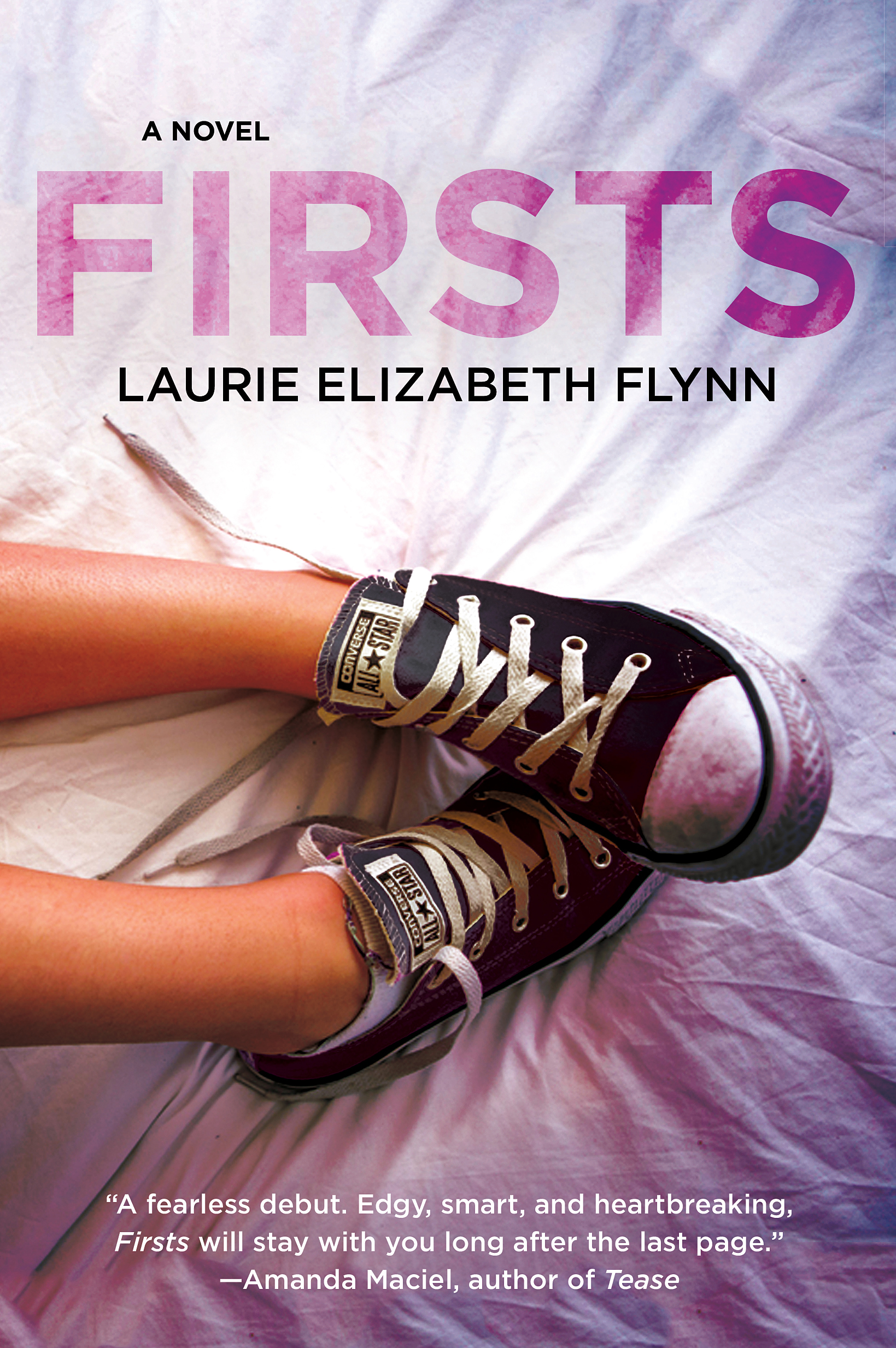 Friends, sometimes I have trouble refilling the metaphorical gas tank.  I fall prey to so many of the wrong kinds of thoughts-I’ve been doing this for so long and everyone else is so much more successful than I am-Have I wasted all of these years and decades?-and some of what I read leaves me cold.  I try to follow advice I learned from Threesome, a 1990s film trenchant to this discussion.  To paraphrase: reading is like pizza.  Even when it’s bad, it’s still pretty good.  I guess.  Thankfully, I stumbled upon something great.  A book so beautiful and funny and sad and well-written that I wanted to reach through the pages and hug the narrator and to be the father she needed.

Laurie Elizabeth Flynn‘s Firsts called out to me atop the Young Adult shelf at the river’s end bookstore.  The cover design (by Danielle Christopher and using a photograph taken by Samantha Scott) intrigued me instantly.  See?  Look: 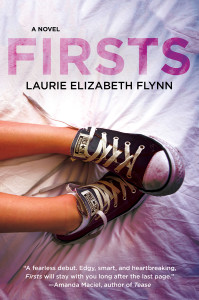 The shoes on the bed (facing up!)…the position of the feet…the way the purple/pink of the title spreads to the bottom of the jacket…  The image tells a story of its own, as all great book jackets do.

So I read the copy on the inside flap:

Seventeen-year-old Mercedes Ayres has an open-door policy when it comes to her bedroom, but only if the guy fulfills a specific criteria: he has to be a virgin. Mercedes lets the boys get their awkward fumbling first times over with, and all she asks in return is that they give their girlfriends the perfect first time-the kind Mercedes never had herself.

Keeping what goes on in her bedroom a secret has been easy - so far. Her mother isn’t home nearly enough to know about Mercedes’ extracurricular activities, and her uber-religious best friend, Angela, won’t even say the word “sex” until she gets married. But Mercedes doesn’t bank on Angela’s boyfriend finding out about her services and wanting a turn - or on Zach, who likes her for who she is instead of what she can do in bed.

When Mercedes’ perfect system falls apart, she has to find a way to salvage her own reputation -and figure out where her heart really belongs in the process. Funny, smart, and true-to-life, Laurie Elizabeth Flynn’s Firsts is a one-of-a-kind young adult novel about growing up.

Come on.  Come on!  Firsts represents a beautiful combination of cover image, jacket copy and first page that should be taught in marketing schools.  How can you avoid buying the book from your local independent bookstore?

Since I’m working on my own young adult book, let’s take a look at what Ms. Flynn did to grab the attention of a reader as jaded as I am.

First, and most obviously, Ms. Flynn has a slam-bang conceit.  Mercedes sleeps with virgin boyfriends so their virgin girlfriends will have a better first time than she did.  This conceit is packed with so much dramatic possibility.  As a grown-up (at least in age), I understood that Mercedes has some deep, dark and massive hurt in her heart that will likely figure into the book.  Obviously.  As a relative grown-up, I understand that girlfriends don’t want to hear their boyfriends had sex with “someone like Mercedes,” but Mercedes and these teenage guys aren’t thinking that far ahead.  The situation will explode into drama.  Obviously.

Ms. Flynn starts in medias res and the jacket copy gives the reader the clues they need to know that there will be some very tastefully described sex going on.  In the first chapter!  We’re all adults here, right?  We can keep it real.  People enjoy stories that keep it real by addressing sex when appropriate.  And the sex in Firsts is not titillating, at least to me.  (Like I said, I’m just barely old enough to be Mercedes’s father.)  I am going to guess that I would have different feelings if I were a young adult reader of this young adult book, but Ms. Flynn uses sex, a perfectly natural part of the adult human experience (or so I hear), in compelling ways.  It’s a part of her conceit, but it’s also a mirror that allows us to understand Mercedes and the other characters, just like births, deaths, graduations, weddings and every other meaningful milestone in life.  Uber-Christian friend Angela fears sex and desires it in equal measure.  “Wednesday Friend” Zach likes it a great deal, but it’s not everything, or even the first thing, that he wants from Mercedes.  The sex in the book is what I call a “shiny thing.”  It gets a reader’s attention, but allows the skillful writer to build exposition, characterization and to squeeze in a lot of humor.  Prepare yourself for one of my highest compliments: the sex scenes in the book reminded me of those in the Alexander Payne/Jim Taylor film Election, based on the book written by one of my favorite writers, Tom Perrotta:

Ms. Flynn’s book is fun!  And funny!  Look at the third and fourth paragraphs again:

This is a hilarious description.  How can you resist not being drawn in?  I have mentioned my occasional lack of enthusiasm for some of “literary” literature, and I think that happens to me because I don’t see a lot of “literary” literature trying to be fun and funny.  Ms. Flynn delivers the “feels,” as the awesome young adult audience puts it, but she also delivers the knowing and the hilarious.

Kim’s DUI last summer cost her a three-month license suspension and would have entailed a couple days in jail if not for her excellent lawyer.  Kim would never admit it, but I know she’s secretly proud of her DUI.  Now she shares an extracurricular activity with D-list celebrities everywhere.

See?  This is humor that is funny at the same time it is sad.  Great humor has an undercurrent of sadness or anger behind it.

A little later, Mercedes is about to have sex with Zach, her standing Wednesday appointment:

“Seriously.  It could be our four-month anniversary.  I’d treat you right.”  He grabs my arm and twirls me around.  “I think I’m in love with you.”

I zip up his fly and buckle his belt.  Everything in reverse.

Can’t you see this happening in a film?  Again, it’s funny (and visual), but more importantly, it is tied into the protagonist’s sadness.  Mercedes is literally closing up shop at the mention of the “L” word.  We want to know why.  We feel bad for her.

I don’t want to ruin any of the rest of the book.  Suffice to say that Firsts is an impressive debut novel of any genre and I regret that the book I’m currently working on will not be as good.  (Though I’m grateful Ms. Flynn jumpstarted me a little.)  Ms. Flynn’s instincts have guided her true and we do well to steal what makes Firsts so very compelling:

There is a hilarious and pathos-packed narrator.

There are big stakes, both for the narrator and those around her.

There is humor that enhances the drama and there are lots of “shiny things” to be found.