What Can We Steal From Dinty W. Moore’s The Accidental Buddhist?

Title of Work and its Form: The Accidental Buddhist: Mindfulness, Enlightenment, and Sitting Still, creative nonfiction
Author: Dinty W. Moore
Date of Work: 1997
Where the Work Can Be Found: The book can be purchased at fine bookstores everywhere.  You can also purchase the e-book version of The Accidental Buddhist.  (Also available on the Nook, a device with far less onerous DRM.)

The whole interview can be viewed on the Author Feast web site.

Discussion:
American lives have sped up a great deal in the past century.  Our breathless days seem, as Mr. Moore points out with statistics, more complicated than they did even a few decades ago.  How utterly appropriate then, that Buddhism might appeal to an increasing number of Americans.  The Accidental Buddhist is…

Through the course of the book, Mr. Moore creates his own very modern American koan and sees Steven Seagal and the Dalai Lama.  He ends up at Comiskey Park and reflects upon the Buddhist inclinations of baseball.  Most of all, Mr. Moore undertakes a journey for understanding and enlightenment, which seems very Buddhist indeed.

Speaking of Steven Seagal, doesn’t “point of entry” sound like one of his films?  Mr. Moore chooses a powerful point of entry to the story of his exploration of Buddhism.  After a brief prelude, Mr. Moore offers “Buddha 101,” a chapter in which he describes his own entry into a Buddhist retreat in the Catskills.  Mr. Moore adjusts to sitting on pillows and trying to keep his mind clear, no matter how difficult that sounds.  Mr. Moore is learning the Buddhist terms in the narrative, which makes it easy for him to teach the reader, for example, what a koan is.  The reader’s point of entry aligns with the author’s in this case.

Instead of presenting himself as an authority at the beginning of the book, Mr. Moore explicitly orients himself as a man who is simply embarking on a journey.  The reader feels a sense of comfort and is united with the author because of this positioning.  Consider a work of art with the exact opposite arrangement.  The point of entry for Full Metal Jacket is the moment when the men are having their heads shaved at the beginning of boot camp.  Immediately thereafter, Gunnery Sergeant Hartman shows up:

Sergeant Hartman is EXPRESSLY positioned as an expert and an authority and the men are VERY CLEARLY subordinate to them.  In The Accidental Buddhist, we feel as though Mr. Moore has offered us a ride to the monastery just down the road.  In Full Metal Jacket, the viewer likely feels the same fear and discomfort that the men feel.  (Especially Private Pyle.)

I love the titles that Mr. Moore chose for his chapters.  Check out the table of contents: 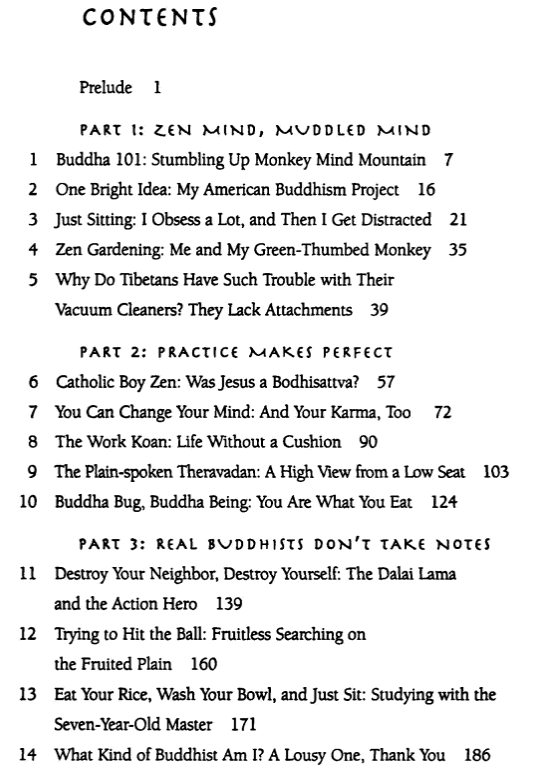 I think it’s fair to say that Buddhists and writers both try to think about the choices they make and the effect they have on others.  What do these chapter titles tell us about the book or about Mr. Moore?

Compare this table of contents to that of a recent edition of 1001 Nights, one of the most entertaining books EVER. 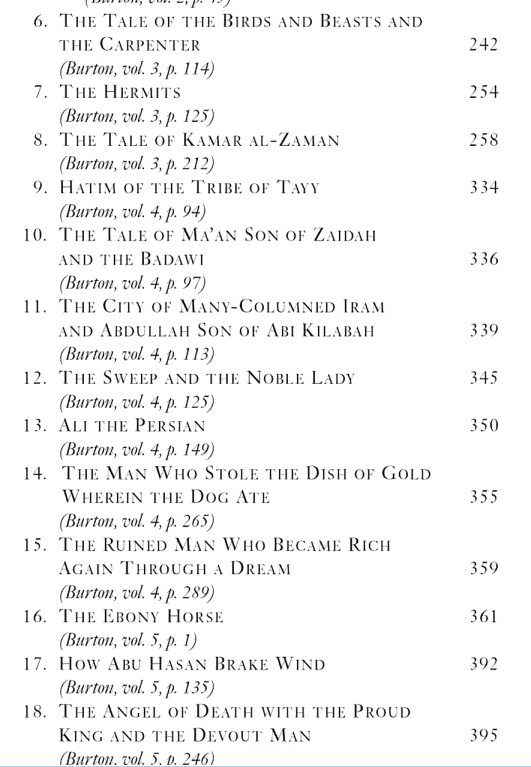 The book’s frame story itself grabs your attention.  The King is angry at a woman who betrayed him, so he’s bedding and beheading a woman a night to get revenge.  Scheherazade volunteers; she has a plan.  She begins telling a story on the first night and the tale is so compelling that the King lets her live.  SPOILER ALERT: there are 1000 more nights.  See how the conceit alone lets you know how cool and fun and brutal and primal these stories are?  Do the chapter titles communicate any of that fun?  “The Ebony Horse.”  “Ali the Persian.”  These are descriptive, but offer little else to the reader.  Mr. Moore, on the other hand, allows the table of contents to reflect the tone of the work as a whole.

Previous
What Can We Steal From Tom Bissell’s “A Bridge Under Water”?

Next
What Can We Steal From Christopher DeWan’s “The Atheist of Dekalb Street”?