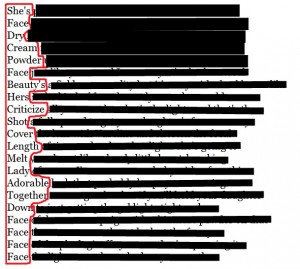 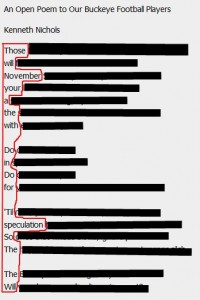 Title of Work and its Form:  “Odds Are,” song
Author: Performed by Barenaked Ladies.  Song composed by Ed Robertson and Kevin Griffin
Date of Work: 2013
Where the Work Can Be Found:  The song first appeared on the album Grinning Streak.  (An awesome summer spin.)  You can purchase the album on iTunes if you do that whole thing.  Buy the album or check out tour dates at BNL’s official site.  Here are a couple seemingly BNL-sanctioned ways to hear the song on YouTube.  Here is the studio version, posted on the BNL YouTube channel:

Here is a live performance on Breakfast Television, a Canadian morning program.  They have their requisite energy, even though I’m guessing the show airs a little early in rock star time:

Bonuses: Where to start?  All of the members of the band are fun and clever men, but here is Ed doing an interview in an elevator:

It started out as a favor to Chris Hadfield, apparently, but here is BNL rocking out with an astronaut who was on the International Space Station.  The future is NOW:

As will soon be apparent, I’m a long-time fan of the band.  Here is a “Bathroom Sessions” version of one of my favorite BNL songs, “Some Fantastic:”

Discussion:
Well, BNL doesn’t CC: me on any marketing e-mails, so I can’t be sure, but it seems as though “Odds Are” is the second single from their new album, Grinning Streak.  (They seem to be playing it in their promotional appearances.)  The structure of the song is solid (of course) and the acoustic guitar/vocal core of the song is augmented by the kind of sonic sweetening that great musicians can do.  It’s not a Phil Spector “Wall of Sound,” but the verses are accompanied by handclaps and the chorus is backed by the theremin-esque wail of a synthesizer wail.  (The work of Kevin Hearn?)  Tyler Stewart’s drums are solid and keep the listener chugging along and Jim Creeggan’s bass line is, as usual, melodic and interesting without calling too much attention to itself.  The lyric is pure BNL/Ed Robertson; it’s straightforward and complicated at the same time.  “Look,” Mr. Robertson seems to sing.  “You could indeed be struck by lightning or hit by a train if you try to enjoy your life.  The odds of these misfortunes, however, are so small that you may as well try to be happy.”  Here is a cool behind-the-scenes video in which Mr. Robertson says as much:

Where are the complications in the song?  Mr. Robertson employs a classic lyrical form.  I’m sure real songwriters have a name for it, but I call it “internal rhyme and release.”  Here’s an example with a bit of a rhyme scheme noted:

The A and C rhymes come so close together, creating some “tension” in the listener.  The abrupt syllables are diffused by the very open vowel sound of the B rhyme.  You’ll also note that the A and C rhymes contain two syllables, while the C rhyme only consists of one.  This is what writers of all kinds do.  They create tension and release it through the use of words and images and situations.  (I don’t know about you, but I don’t want to get struck by lightning or stung by a bee.)

Let’s examine the tone in the lyric:

Hit by the A-Train,

Crashed in an airplane;

I wouldn’t recommend either one.

Killed by a great white

I guess there ain’t no way to go that’s fun.

We all agree that being struck by lightning and shark attacks are serious problems, right?  We certainly wouldn’t make fun of a family member who experienced such a thing.  But they are extremes and extremes are fun.  Mr. Robertson injects more “fun” into the lyric by twisting “meteorite” slightly to rhyme with “great white.”  Further, in case you had forgotten, Mr. Robertson did indeed crash his plane a few years ago.  By including such a personal detail, Mr. Robertson emphasizes the theme of the piece.  If someone who has experienced a plane crash can get over the accident, you, dear listener, should be able to take the risk of being shot down by a potential love interest or something.  Mr. Robertson (through his narrator) takes the same tone you might take with a child who is scared of a monster.  Evoking an extreme specter takes the power away from the smaller ones.

When is BNL releasing the album?  Summer.  When are they going to be playing this song every night on their tour?  Summer.  What a perfect time for an upbeat song such as “Odds Are.”  Short story writers and poets aren’t exactly like rock bands.  We do, however, have albums (short story/poem collections) and we do release singles (short stories and poems) and we do give interviews and try to promote our work.  If you are a writer who tries to promote him or herself online, think about what you can do to release your own “singles.”  Me?  Occasionally, I’ll write a GWS essay about something that is kinda topical in the hopes that others will be interested because of the work being in the news.  On these lazy summer days, I will probably start posting some playlists of songs that help you actually write when you’re staring out the window into the sunny beautifulness.  Think creatively to release your own “singles.”

One final point: I made my longtime BNL fandom clear in my post about Steven Page’s “Indecision” and briefly discussed what I like about the Page/Robertson catalog.  Songwriting is a little bit more collaborative a process than is writing a novel.  Mr. Robertson collaborated with his bandmates to craft the final version of the song.  The other three men in the band are great musicians and must have added to the work a great deal.  The song was co-written with Kevin Griffin, the lead singer of Better Than Ezra.  You remember them.  Their big hit was “Good,” but I prefer “Rosealia.”

Mr. Robertson has written with Jason Plumb, too.  Here’s their AWESOME song, “Satellite.”

Why mention all of this?  Maybe writing short stories and poems and novels and creative nonfiction doesn’t have to be a solitary process.  Yes, people already do collaborate on prose, but maybe we should all make more of an effort to be like  songwriters, to lock ourselves in a room with a writer we respect and see what ends up on the page?