Title of Work and its Form: “” ‘There’s just one little thing: a ring. I don’t mean on the phone.’ “—Eartha Kitt,” poem
Author: Kathy Fagan
Date of Work: 2006
Where the Work Can Be Found:  The poem was originally published by the prestigious online magazine Slate.  By all means, go check it out right now.

Discussion:
Kathy Fagan’s “’There’s just one little thing…’” is a poem whose title connects its narrator with that of the song “Santa Baby.”  (Ms. Fagan certainly announces that she has taste in her choice of referencing the Eartha Kitt version.)  The poem’s narrator clearly announces her (or his…who knows?) desire to receive a diamond ring and to take her rightful place on a pedestal in the relationship.  The narrative is complicated in the last two lines:

Santa, from that other

says I should wear it now.

It seems as though the narrator has a romantic rival, the “sorry cow.”  The reader is left wondering how the conflict will eventually be resolved.

The first thing that jumped out at me was the interesting structure of the poem.  Ms. Fagan prepared me to think about popular song, so I couldn’t help but think of the work in that way.  The poem begins with a kind of recitative, preparing the reader for the primary “melody” in the verse.  The “bridge” arrives as the meter changes completely with the lines “Been bottom./ Done shouldered.”  Verse 2 arrives with the 1-2-3 repetition of the lines beginning with “O” and those last two lines serve as a kind of button on the “song.”

It may seem crazy to split up a serious poem in this manner, but Ms. Fagan clearly had some kind of structure in mind.  Look at the changes in meter that Ms. Fagan employs:

By mixing it up, Ms. Fagan keeps her audience engaged and prevents readers from being lulled into complacent scanning of the lines.  It’s also a lot of fun to transfer between meters, isn’t it?  Playing with words and how they fit together isn’t just for kids, right?  Adults also enjoy the twists and turns they can find in sentences.  Switching between meters also allows Ms. Fagan to place emphasis on certain ideas.  There are points in the poem in which the changes stop the reader momentarily.  It seems particularly apparent that Ms. Fagan intends “Been bottom./ Done shouldered.” to represent something significant about the character of her narrator.

Poetry, of course, is best communicated by the human voice.  (If you’ll notice, the link to Ms. Fagan’s poem allows you to hear her reading her work!)  When you’re considering the written word on the page, it’s up to you to try and decode the unique kind of music the poet intends to make.  Break out your favorite kind of pen and annotate the poem.  Jot down the ideas that come to mind!  Circle the rhymes you may find!  Count the repetitions hidden in the lines!  One of the reasons that workshops help so many writers is that everyone in the room is sharing ideas about the work.  Some are great, some are just okay, but this analytical process allows everyone to understand the work on a deeper level.  When you mark up a page, you’re entering into a discussion with the poet.  I hadn’t come up with my overall idea about this poem’s structure until I made my chickenscratches.  What might it look like if you mark up a piece of writing?  Here’s what I did to a section of Ms. Fagan’s poem: 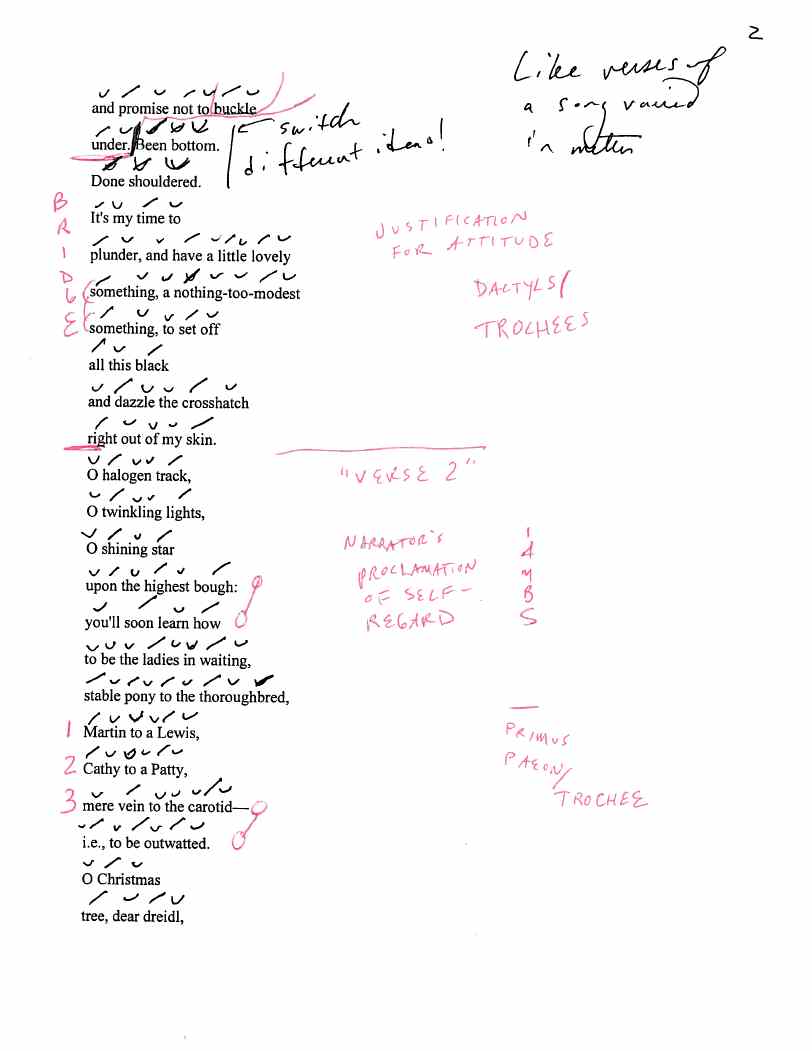 There’s no right or wrong; I simply wrote what I thought about the piece, which led to even bigger concepts.  You’ll also notice that I tried to scan each syllable in the poem, deciding which should be stressed or unstressed.  When I compared my thoughts to the way Ms. Fagan made them sound in her reading, I noticed a few differences that illuminated my understanding of the poem.  (Her metrical ideas were better, of course.)

Title of Work and its Form: “Mommie Dearest,” nonfiction…we’re also considering the rest of the Hitchens oeuvre.
Author: Christopher Hitchens
Date of Work: 2003
Where the Work Can Be Found: The article was originally published on Slate.  Hitchens also published a book about Mother Teresa called (somewhat cheekily) The Missionary Position.  In addition to publishing several books and countless articles, Hitchens was a legendary public speaker; many of his speeches and debates can be viewed on YouTube.

Element of Craft We’re Stealing: Use of Rhetoric

Discussion:
December 12, 2012 is the one-year anniversary of the death of Christopher Hitchens.  You’ll notice I didn’t say that Hitchens “went on to his reward” or that he “passed away” or that he is “in a better place.”  As Hitchens would agree (if he could), his body is currently in some state of decomposition as it slowly returns to the elements from which it came.  Fortunately, Hitchens has achieved the only kind of immortality for which a writer can hope: his ideas live on in his works and in the hearts and minds of those who read them.

I use “Mommie Dearest” in most of my composition classes because it’s a representative example of powerful rhetoric.  Unlike so many “careful” public thinkers, Hitchens was not afraid to honestly say what he believed.  More importantly, he was perfectly prepared to back up his assertions.  One of Hitchens’ most powerful dictums?  “What can be asserted without evidence can be dismissed without evidence.”  Hitchens was well aware that he turned readers off when he would call the woman known as Mother Teresa a “fanatic, a fundamentalist, and a fraud.”  (And that’s not even the worst of it.  He also employed the phrase “thieving Albanian dwarf.”)  If those readers did not go through the rest of his piece, well, he counted it their loss.  As Hitchens pointed out in “Mommie Dearest” and in The Missionary Position, his antipathy was deserved.  Mother Teresa facilitated human suffering, lent her halo to evil men and did what she could to ensure the pro-poverty, anti-woman policies of the Catholic Church continued in India and beyond.

Hitchens was fueled by pathos (emotion) but delighted in logos (reason).  He was opposed to the compulsory genital mutilation of children.  Other folks, such as Rabbi Harold Kushner, see no problem with the circumcision of young boys.  (The circumcision of young women is a different matter for Rabbi Kushner, of course.)  If you wish, watch this exchange. (It gets really good around 4:40.)  Hitchens is clearly quite disturbed that the man beside him is discussing the genital mutilation of young boys in such flippant terms.  Yes, you could say that Hitch was angry.  Does he heave a chair at the rabbi?  No.  Does he direct thoughtless invective at the man?  No.  Instead, Hitchens reasoned with Rabbi Kushner, using the man’s flippancy to prove his ultimate assertion: “Religion makes morally normal people say and do disgusting and wicked things.  You’ve just proved my point for me.”  The exchange clearly made the moderator and other guests uncomfortable, but that’s their problem, isn’t it?  Well-behaved thinkers seldom make history, do they?

Christopher Hitchens was known for the rejoinders he used to attack his ideological opponents.  These “Hitchslaps,” as they came to be called, are intellectual roundhouses.  Vanity Fair, the home of a great deal of Hitchens’s work, created a video collection of some of the best Hitchslaps.

Christopher Hitchens has been dead for a year, but his ideas will long outlast most of us.  No matter what you may feel about his convictions, you must admit that he was never boring.  In dying, he merely joined the pantheon of thinkers he so respected, including Spinoza, Jefferson, Paine and Orwell.