Title of Work and its Form: Sparky!, autobiography
Author: Sparky Anderson with Dan Ewald
Date of Work: 1990
Where the Work Can Be Found: I believe the book is out of print; you can find it at many of the fine secondhand bookstores around you or on the Internet.  Mr. Ewald has written a few books about Mr. Anderson; Sparky and Me: My Friendship with Sparky Anderson and the Lessons He Shared About Baseball and Life was released in 2012.

Discussion:
As a lifelong Detroit Tiger fan, I grew up with Sparky Anderson and Alan Trammell and Lou Whitaker and Jack Morris and all of those guys.  They were good—very good—in 1984 and broke my heart in 1987.  (I don’t want to talk about what the team was like between 1995 and 2003.)  Sparky Anderson was elected to the Baseball Hall of Fame in 2000, fitting recognition for his work as a major-league manager.  Mr. Anderson reached the majors as a player, but knew that he wasn’t exactly good enough to make a life that way.  He began managing the Reds in 1970, winning four pennants and 2 championships with the Big Red Machine.  In 1979, he was removed as manager of the Cincinnati club and went to the American League’s Tigers.  The 1984 Tigers started the season 35-5 and rolled to a Series victory over the Padres.  (Sorry, Tony Gwynn.)  Mr. Anderson ended his managerial career in 1995 at the age of 61.  He died in 2010, having reached the top of his chosen profession.

Sparky reveals Mr. Anderson to be a very thoughtful man.  The book begins with a confession: “My name is Sparky Anderson.  And I’m a winaholic.”  Mr. Anderson briefly describes his life and how it was influenced by his desire to win and then goes into detail about an interesting incident.  The 1989 Tigers were 13-24 and Mr. Anderson had something of a panic attack/identity crisis.  He went home to Thousand Oaks, California to take stock of his life.  (Don’t we all have occasional dark winters of the soul?)  After working out his problems, he returned to the Tigers, refreshed.  What should writers steal from the first chunk of Sparky!?  Mr. Anderson delves relatively deeply into issues of identity.  He describes the difference between George and Sparky.  Sparky was the fiery man who would yell at umpires and brood over losses; George was married to Carol and loved visiting children in the hospital.

The most striking part of the book (to my mind) is the voice that Mr. Anderson and Mr. Ewald employ.  Mr. Anderson was certainly a very smart man, but he wasn’t the most formally educated man on the planet.  You can flip to any page of Sparky! and find sentences with the same kind of diction.  The sentences are short.  The paragraphs add up to big ideas that could have been condensed into one sentence.  Most of them begin with nouns or names.  Here’s a representative section:

How does a person attain success?

Longevity.  Because success is for the moment…and only that moment.  So it must be aqcquired moment after moment after moment.  That’s the difference and that’s where a lot of people make a mistake.  In baseball, for instance, some guys think if they win one year that they’re automatically successful.

They’re wrong.  That’s not success.  All that happened was the blind squirrel happened to find an acorn.  They could never repeat because they don’t have it in them.  They were for the moment.  But only for one single moment.

Mr. Ewald didn’t coax Mr. Anderson into longer, more complicated sentences.  And that’s fine.  Why?  When I picked up the book, I wanted to feel as though I were spending an hour with George “Sparky” Anderson, a man with whom I’ve long felt a connection!  Mr. Ewald traded the beauty of complicated diction for the simple poetry of authenticity.

I can’t help but interject with respect to a cause that means a great deal to me.  Alan Trammell belongs in the Hall of Fame.  Plain and simple.  He was easily better than Ozzie Smith and Barry Larkin.  Sparky agreed with me!

I’d take Trammell because of everything he can do.  Smith is a wizard in the field and can do more with the glove.  Ripken is stronger and hits with more power.  But Trammell does everything.

Trammell hits 15 homers a year, knocks in 90 runs a year and always plays around the .300 mark.  In the field he never botches a routine play.  People take that for granted, but that’s the sign of a great shortstop.  If he gets a ground ball, it’s an out.

I’ve seen Trammell carry us in a pennant race after we lost a couple of key people like Lance Parrish and Kirk Gibson.  That takes a special kind of player. 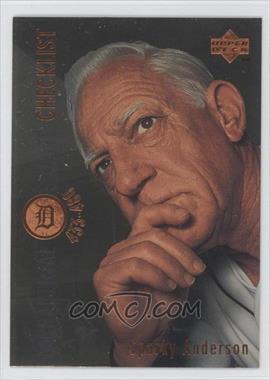 Title of Work and its Form: “Casey at the Bat,” poem
Author: Ernest Lawrence Thayer
Date of Work: 1888
Where the Work Can Be Found: Thanks to public domain, the poem can be found in many anthologies and even on the Internet.

Discussion:
“The Outlook wasn’t brilliant for the Mudville nine that day…” So begins “Casey at the Bat,” a narrative poem that is written on the hearts of all baseball fans and all Americans. Baseball fans can relate to the heartbreak felt by the Mudville supporters. (As a lifelong Tiger fan, you must believe that I know my share of heartbreak. The Bengals were terrible for a decade, lost 119 games in 2003 and threw away the World Series in 2006 on bad fielding by their pitchers.) The poem is more universal, however, as we can all understand how it feels to hope for deliverance that doesn’t come. Thayer published the poem in 1888 and it didn’t quite take off for a while. Then De Wolf Hopper, a vaudeville performer, started performing it in his act. He subsequently recited the poem about eleventy trillion times. (Can you imagine a person reading a poem being a big-time act in the United States?)

It also bears mentioning that “Casey” has a personal significance to me. I’ve had the incredible fortune to present at the scholarly conference held in Cooperstown each year and I have seen Tim Wiles, Director of Research for the Hall, recite the poem in full Mudville regalia. I highly recommend you check out his performance if you have the opportunity.

One of the many ways that Thayer draws the reader into the narrative is through the use of poetic meter. The rhythm of the words attracts your attention, doesn’t it?

The outlook wasn’t brilliant for the Mudville nine that day:
The score stood four to two, with but one inning more to play.
And then when Cooney died at first, and Barrows did the same,
A sickly silence fell upon the patrons of the game.

If you are interested in writing poetry, you should learn the mechanics of poetic meter. (Don’t worry; it’s not that hard.) Lines are made up of poetic feet. The number of feet and their rhythm determine the kind of meter the poem is using. Shakespeare (and other Renaissance playwrights) employed iambic pentameter. “Iambic” means that the feet have a weak syllable and then a strong one. “Penta-” means that there are five feet. (The Pentagon has five sides.)

In order to figure out the meter, let’s take a line and break it down into strong and weak syllables. (Strong syllables will be in ALL CAPS.)

“The OUTlook WASn’t BRILLiant FOR the MUDville NINE that DAY.”

Can you feel that rhythm? There are seven “weak-strong” feet, so it’s iambic heptameter.

The rhythm of the lines keeps you listening. We’re pattern-seeking animals, after all, so we enjoy the regularity of the syllables. The use of meter and rhyme create suspense in the listener. We know what the rhyme will sound like, but we don’t know what it will be! Even if you’re not a fan of rap music, you can often find that the best rappers do very interesting things with meter and rhyme. (I happen to think folks such as Jay-Z and Eminem are worth examining.) Even if you’re not writing a poem, using these techniques can help you get the most out of your prose. Perhaps you will use rhyme and meter to create a memorable line at the end of a chapter.

Thayer also employs a technique that isn’t as common as I would like: the sad ending. When you watch a sports movie, you can tell very quickly whether or not the main characters will ultimately prevail. As Dante from Clerks points out, life is a series of down endings. The Mudville fans (and Casey himself) will probably learn a lot more from failure than from success.

What Should We Steal?: