Title of Work and its Form: “Harbingers,” poem
Author: Tory Adkisson
Date of Work: 2013
Where the Work Can Be Found: The poem made its world debut in Issue 4 of Four Way Review.  You can read the piece here.

Bonus:  Here are some reviews Mr. Adkisson wrote for The Rumpus.  Here is a cool poem Mr. Adkisson placed in Lambda Literary.

Discussion:
“Harbingers” is a poem that consists of 24 three-line stanzas whose lines meander across the page (or screen)…and one extra line.  The first person narrator (at least in my view) is talking to a significant other.  Perhaps it’s just because of my own perception of relationships, but it doesn’t seem as if things are going well.  The boyfriend or girlfriend is told: 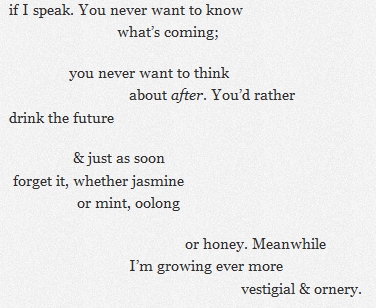 The narrator imagines, it seems, that the two of them are game birds, just waiting “to be savaged.”

I suppose what I admire most about the poem is that Mr. Adkisson demonstrates a very high level of control over words and language.  The jagged lines and fascinating word choices make me think that he’s a surgeon with a scalpel and I’m a construction worker with a sledgehammer.  Aside from that, I love the way that Mr. Adkisson sublimates the poem’s powerful emotion in a practical way.

Most of us have been in a relationship that is or was…suboptimal.  It would be VERY easy to write a poem that is simply a string of expletives intended to shatter your ex’s Vital Lie, to render them broken and sobbing on the floor.  Unfortunately for me, that doesn’t qualify as great literature.  In “Harbingers,” the deep pathos is present, but Mr. Adkisson put complicated meaning ahead of the lower desires we all possess.  If you’re angry at someone, you probably aren’t as eloquent.  Calm and thoughtful reflection is really the only way that you’ll ever get the kind of understanding that lets you characterize troubled lovers as a:

Compare the skill demonstrated in Mr. Adkisson’s poem to the lack of skill present in teen angst poetry.  We all wrote TERRIBLE poems when we were sixteen; it’s nothing of which we should be ashamed.  Here’s an excerpt from my favorite example, Devan Daly’s “Fuck You Poem.”  (It’s my understanding that all of the poems on that blog were submitted by the authors, so don’t worry; we’re not laughing AT someone…we’re laughing WITH them.)

Mr. Adkisson demonstrates that we can still write with our hearts, but we should mix in a good part of the head, too.

There are many ways to keep yourself cool when you fight with a significant other.  You can think of all of the names of the players on your favorite baseball team.  You can say the alphabet backwards in your head.  You could even name different varieties of birds.

What kind of poem will result if you spend an hour playing with a list of words used to describe groups of animals?  “A ‘kettle’ of vultures,” you might wonder.  “What does that mean?  A ‘streak’ of tigers?  Fascinating!”

What could happen if you explore the 1882 roster of the Cincinnati Red Stockings?  (That’s the team that soon took the name of the “Cincinnati Reds.”)

What could happen if you pay some close attention to the transcript of the Apollo 11 mission?

What might you write if you immerse yourself in the Telephone Directory Directory?  (If you’ll recall, in old-timey times, people would refer to the first two numbers as letters.  KL5-1234.  Go ahead and steal this idea.  What can you do with these prefixes and the words people assigned to them?)

Okay, so let’s talk about the way Mr. Adkisson arranges the lines on the page (or the screen).  To the layman, it might seem as though he’s just plopping lines around.  A good reader or good poet can see some of the advanced technique involved in the composition of the poem.  Here’s a comparison.  I like tennis, but I don’t understand it on a very complicated level.  When I see the ball come to Chris Evert, I’m just thinking she’ll hit it back over the net, or maybe to the part of the court opposite to the part occupied by Martina.

Chris Evert’s advanced skill and understanding of the game, however, allows her to think about a very precise ball placement, the amount of spin she wants to put on the ball, the speed she wants the ball to have, foot placement that will allow her to most easily move to where she thinks Martina will return the ball…

So what advanced ideas did Mr. Adkisson have in mind while he composed?  I think he was considering the movement of the reader’s eye.  Isn’t a bad relationship like a maze?  Your eyes aren’t moving in regular patterns when you read the poem, trapping you in the same kind of confusion as a bad romantic situation.

And that orphaned last line, of course, has no friends, it seems to me, because the line packs more of a punch on its own.  I suppose it can be intimidating to observe the craft of someone who is REALLY GOOD at something you can’t do very well…ask anyone who is good at anything; you can’t dismiss what you don’t understand.  Instead, you must admit that you have something to learn and, in this case, take out a pen and mark up the poem until you get some ideas.

Title of Work and its Form: ”looking through a telescope at the moon on the day neil armstrong died,” poem
Author: Raena Shirali
Date of Work: 2013
Where the Work Can Be Found: The poem appears in Issue 3 of Four Way Review.  You can find the poem here.  (And you really should go get it.  The poem is striking!)

Bonuses:  Here is another poem by Ms. Shirali that was published in Fogged Clarity.  Here is a brief essay Ms. Shirali wrote about the poetry of Thomas Hardy.

Discussion:
The narrator takes a trip to the Cincinnati Observatory on the day Neil Armstrong died and attempts to locate the Apollo 11 landing site through the lens of a cool telescope.  The narrator doesn’t seem to succeed at finding the landing site, but learns something more important about the moon and perhaps life.  I like the poem for several reasons, not the least of which is its subject matter:  I LOVE poems about space.  (I even wrote a short story and a play about a future spacebound poet.)  One of the ideas Ms. Shirali seems to reference is the simultaneous accessibility and obscurity of space and other science-type stuff.  Here is a NASA photo of the Apollo 11 landing site that was taken by the Lunar Reconnaissance Orbiter Camera. 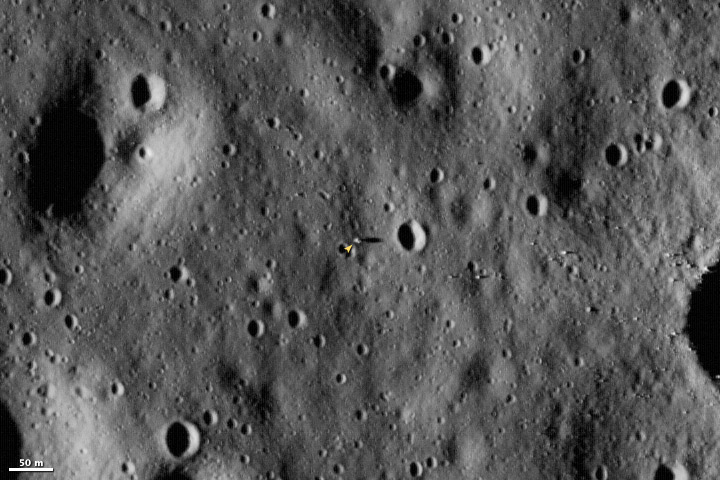 See the little yellow arrow?  That’s the part of Eagle that was left behind when the ascent stage blasted Armstrong and Aldrin back up to Columbia.  Throughout the poem, Ms. Shirali accomplishes one of the primary goals of poetry: she uses words to describe something that is incredibly beautiful and difficult to understand through the use of one of our senses.  Her description is not a rote recitation of detail.  Instead, she uses abstract language to try and communicate the feeling of what she sees:

there are two sides to everything
& one is always dark, maria,

…a contradiction, a lie of light
& dark…

I had never thought of the moon’s surface in such terms.  On Earth, there are countless hues of countless colors, but on the Moon, everything can be measured by light and dark.  How do we come up with beautiful and succinct ways to describe things?  There’s a strange alchemy that happens in the poet’s mind.  There’s no step-by-step procedure to crafting striking abstract descriptions.  I think it’s a matter of percolation combined with practice at “playing” with words.

How do we let things percolate?  Well, it’s a process that is both active and passive.  Ms. Shirali no doubt labored over her poem for a long time, jotting down ideas and actively pressing herself to come up with the right words to fit to her ideas. Perhaps she scratched her forehead while scribbling thoughts into Moleskin notebooks and wishing for inspiration to come.  This is the active part of percolation.  You must simply sit down and put pen to paper.

Then there’s the passive part of percolation.  As always, Isaac Asimov had something smart to say.  Archimedes, the brilliant mathematician, was charged with figuring out whether the king’s crown was pure gold.  Not a difficult task…except Archimedes was not allowed to melt the crown.  Archimedes did a lot of active thought in an attempt to confront the problem.  Then…one day…he took a bath.

The water in the bath slopped over as Archimedes got in. Did Archimedes notice that at once, or did he sigh, sink back, and paddle his feet awhile before noting the water-slop? I guess the latter. But, whether soon or late, he noticed, and that one fact, added to all the chains of reasoning his brain had been working on during the period of relaxation when it was unhampered by the comparative stupidities (even in Archimedes) of voluntary thought, gave Archimedes his answer in one blinding flash of insight.

Jumping out of the bath, he proceeded to run home at top speed through the streets of Syracuse. He did not bother to put on his clothes. The thought of Archimedes running naked through Syracuse has titillated dozens of generations of youngsters who have heard this story, but I must explain that the ancient Greeks were quite lighthearted in their attitude toward nudity. They thought no more of seeing a naked man on the streets of Syracuse, than we would on the Broadway stage.

And as he ran, Archimedes shouted over and over, “I’ve got it! I’ve got it!” Of course, knowing no English, he was compelled to shout it in Greek, so it came out, “Eureka! Eureka!”

Neurologists can tell you how the process works far better than I can, but the point is that your subconscious will work on the active thought you did in trying to come up with unique and interesting ways to describe what you had in mind.

I also loved the way that Ms. Shirali played with the flow of language in the poem.  Look at the first two stanzas.  She makes a few interesting choices: